Industry to Double in Next Four Years

It's turned out to be a rough year — yet again.

Market buy-and-holders have been rewarded with a 4% return. Oil's down around around 12% for the year. And for all the talk about Europe, economic collapse, debt, and money printing, gold is up only 12%.

Despite raging production and talk of "shale everything," natural gas was actually one of the biggest broader market winners, moving up 25% on the year from $3.00 to $3.75.

Still, 25% pales in comparison to what I want to share with you today...

And all these investments — index funds, metals, energy commodities — will continue to drag behind this one particular sector for years.

For the record, here's what those returns — the Dow, oil, gold — look like for the year so far:

And here's a chart of what the two leading companies in this other sector have done in the same time:

So, what do these companies do?

All Kinds of Amazing Things...

They make a device that will change manufacturing forever.

Instead of using factories, production lines, multiple pieces of million-dollar equipment... and then shipping products around the globe...

These companies make printers that manufacture almost any product imaginable.

The schematics of the object are stored as files on a computer, the printer is filled with the appropriate materials, and then the operator hits “print.”

It's Henry Ford's world-changing production line condensed into a single device that can be moved anywhere.

You can already see how this advance will change the world once more — and how the market is already rewarding it with +150% gains in 11 months.

Here's how Business Insider puts it:

... People are already starting to develop technologies to print in rubber, plastic, and metal.

Today, Nike makes more than 500 million pairs of shoes a year. Imagine if, instead of them being made in China, they were instead printed on a printer? The process of purchasing a shoe would be like buying an “app” that contained a 3D computer-aided design (CAD) file for the shoe which could be printed directly.

Further out into the future, I have seen teams at Stanford who are working on the ability to print a human organ, which would be transformational for even more obvious reasons.

Those are just some of the reasons this industry is expected to double in size in the next four years — and will continue growing well beyond that.

Many say it could lead to a collapse of China's manufacturing dominance.

Without any exaggeration at all, this industry could literally transform any object that is designed and built today.

You can already download designs from the Internet to print out toys, tools, and art.

A company called Defense Distributed is printing out guns. 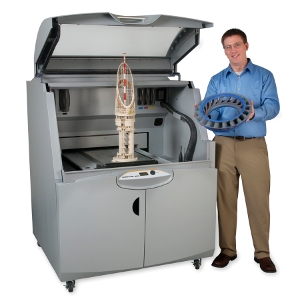 Another called Omote3D in Japan is opening photo booths where you get a printed sculpture of your pose instead of a photograph.

Scientists at Wake Forest are printing out implantable human cartilage; others are working on printing tissues for organ replacement.

According to industry journal Plastics & Rubber Weekly, the biggest market for these printers is consumer goods, representing 24% of demand...

And the best part is this industry is in its infancy... which means huge gains are ahead for investors.

The market will be worth around $5 billion by 2020, but is widely expected to grow into a trillion-dollar industry.

As the industry grows by tens of thousands of percentage points, the companies taking the early lead will grow at the same rate.

Some will dominate the making of the printers themselves. Others will grow by pioneering new uses for them.

You should be up to speed on what these printers can do — and how you can invest in them.