This was the ominous prediction that I came across for oil prices recently. It was an outrageous figure to say the least, but he was adamant it was right around the corner.

I couldn't believe my ears, and even though I can hold a certain degree of doom-and-gloom in the runaway shale boom that's underway, my response was immediate...

Don't count on it.

Barring some black swan event that Monday morning quarterbacks will swear they saw coming for years, the sobering truth about oil in 2014 is that prices will not spike to doomsday levels.

That doesn't necessarily mean we're in for a boring year.

It's going to be quite the opposite...

Boom Times to Continues for the U.S.

In the United States, two areas stand out above all others: tight oil plays and offshore targets in the Gulf of Mexico.

The latter, of course, has been under fire ever since the Deepwater Horizon incident and is only now starting to experience a comeback. In particular, drillers will be focusing in waters deeper than 500 feet.

Moving onshore, it's even easier to pinpoint the hot-spots in the U.S. oil industry. Fact is, an overwhelming amount of next year's growth will come from a few select shale plays.

After all, just six shale plays are responsible for almost 90% of all production growth in the U.S.

Granted, this shouldn't come as a sudden revelation, and there's certainly no secret, undiscovered oil field tucked away in some remote part of North America.

For better or worse, geologists already know where the oil can be found.

Now, it's all about how they tap into our unconventional oil resources.

The EIA's most recent Drilling Productivity Report tells us exactly how successful we've been developing these tight oil and gas plays up to this point.

There have only been a handful of oil fields in history capable of pumping out more than one million barrels per day.

Today, the United States is home to three such plays.

Let that sink in for a moment, because tight oil and gas plays represent the single greatest investment of our generation...

And technology will be the main driver of this tight oil revolution.

The name of the game is 'efficiency,' and it's transforming the North American energy landscape. In years past, the number of active rigs was a direct sign of production growth.

Now, the transition to multi-well pads has become the norm, allowing a company to both reduce the number of days it takes to drill, as well as lower the construction costs associated with shale wells that can cost upwards of $10-12 million apiece.

This innovative drilling technology alone has created more millionaires in the oil industry than ever before. Within five years, that technology will be taken to even greater heights.

Starting in 2014, Continental Resources is planning to develop one area in the Bakken by drilling between 20-30 wells per location!

This is precisely the kind of advanced drilling technology that helped Continental blow past huge integrated oil companies like ExxonMobil, which hasn't even come close to matching Continental's performance since the tight oil boom began five years ago: 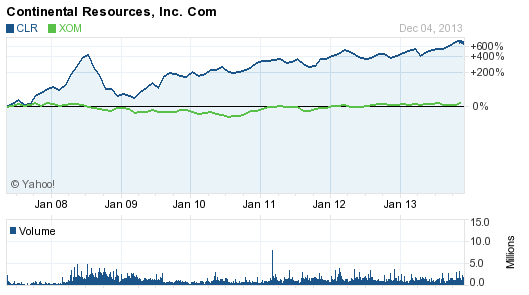 Boosting domestic supply will have other consequences over the next twelve months.

One thing you can count on in an oil boom is less imports. Within a span of three years, the U.S. has lowered the amount of crude oil it imports by about 20%. Nowhere else does this have more dire implications than in Canada.

Unlike the Saudis, who can simply sell their crude elsewhere, Canada's client list has just one name — the United States. The problem is that Canadian oil production is expected to rise to nearly 6 million barrels per day by 2035.

So it's understandable why the following chart scares them to death: 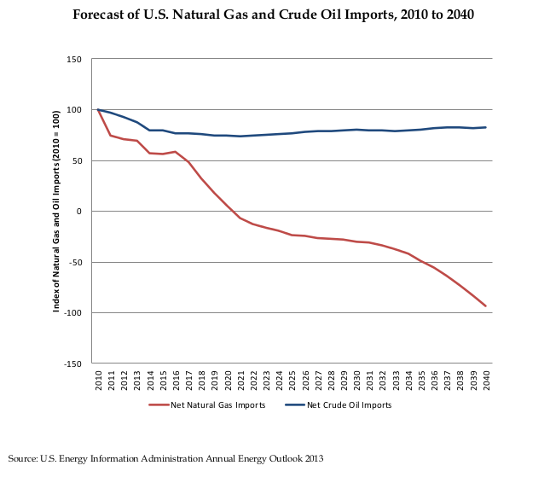 In other words, you can bank on our neighbors to the north looking for more options.

Over the next twelve months, projects like Enbridge's North Gateway pipeline will gain more traction, opening the door to much more lucrative opportunities across the Pacific.