WTI Falls Below $100: Is This an Oil Dip Worth Buying?

Has everyone finally come back to Earth?

After watching WTI crude top $130.77 per barrel last week on the back of fresh Russian energy sanctions by the U.S., we all became flush with fantasies of $150/bbl oil.

Don’t beat yourself up if you were swept up in the hype — even I was caught up in that euphoria and entertained fleeting thoughts of What if? as crude prices soared higher.

Of course, many of those fantasies have dissipated over the last few days as crude oil prices came crashing down. 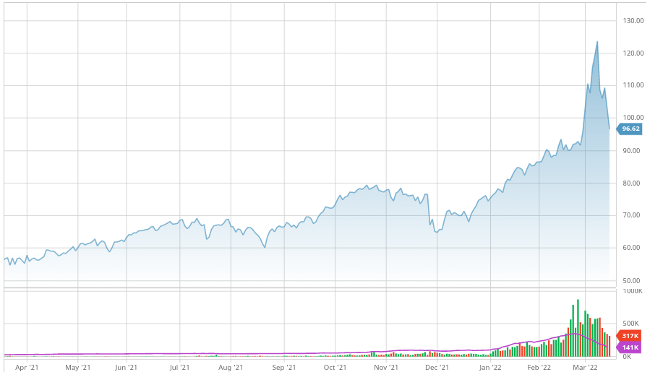 On Monday, WTI crude fell below $93/bbl, a level we haven’t seen since Russian tanks started rolling across the Ukrainian border.

Now to be fair, $150/bbl oil certainly isn’t out of the realm of possibility. The geopolitical rampage we’ve witnessed over the last few weeks has been nothing short of extraordinary.

Given the unpredictability of how this situation has unfolded thus far, we would be foolish to discount another price spike.

And the way things are looking right now, there’s no end in sight without either Russia or Ukraine capitulating a little… something neither country seems willing to do. In fact, escalation may very well be in the near future depending on whether or not China decides to enter the arena and throw its support behind Russia.

Last week, I told you that the higher oil climbs, the harder it will be for investors to pick the fruit.

More importantly, you need to identify the right buying opportunities.

So ask yourself, “Is this an oil dip worth buying?”

You bet it is.

Don’t Miss the Forest for the Trees

Well, there are three catalysts that led to this predicament.

One of the primary drivers of oil prices over the last decade has been China.

Since 2009, China’s oil demand has surged nearly 75% to 14.2 million barrels per day. For a little perspective on this, keep in mind that U.S. petroleum consumption has only grown around 10%.

So when reports came out that the country started locking down entire cities — more than 37 million people at last count — from a harsh COVID-19 outbreak, oil traders started pumping the brakes.

Adding even more downward pressure on oil prices, we also learned that President Biden was courting Venezuelan President Nicolás Maduro in an effort to boost global crude supply. Granted, the veteran members here in our Energy and Capital investment community know that Venezuelan crude is a fool’s errand.

Not only has Venezuela’s oil industry been in complete disarray for nearly two decades, but the crude extracted from Venezuela’s fields is of the poorest possible quality, which means that oil prices MUST remain in triple-digit territory for any chance of growth.

And then we find ourselves moving closer to another Iranian nuclear deal. However, there’s a bit of a problem here. You see, Iran is already selling its oil on the black market to countries like China, so it’s unlikely any flood of new supply would have any drastic effects on the bullish fundamentals.

So again, is this oil dip worth buying?

Fortunately, your answer is a simple and resounding YES!

Of those three catalysts pushing oil prices lower, it’s the threat of demand destruction in China that holds the most weight, especially considering that Congress is fervently against a new nuclear deal with Iran.

I’ve told you before to dismiss the hype and focus on the fundamentals.

And make no mistake, dear reader, the fundamentals for oil in 2022 are still incredibly bullish. It’s become clear that U.S. drillers can’t turn on the taps overnight.

Moreover, we’re barreling toward the summer driving season with gasoline demand recovering in a post-lockdown economy.

If you missed the first run over $100/bbl, this is the buying opportunity you’ve been waiting for.