Would Warren Buffet Buy or Sell This Market?

It is increasingly difficult to find something of value to buy in this market. Here's why...

This is a chart of the S&P 500 versus the Volatility index (VIX). The VIX is known as the “Fear Index,” and it measures option trades on the S&P 500.

When the VIX is high, there is a large feeling of uncertainty. When it is low, investors feel the good times will go on and on and on... 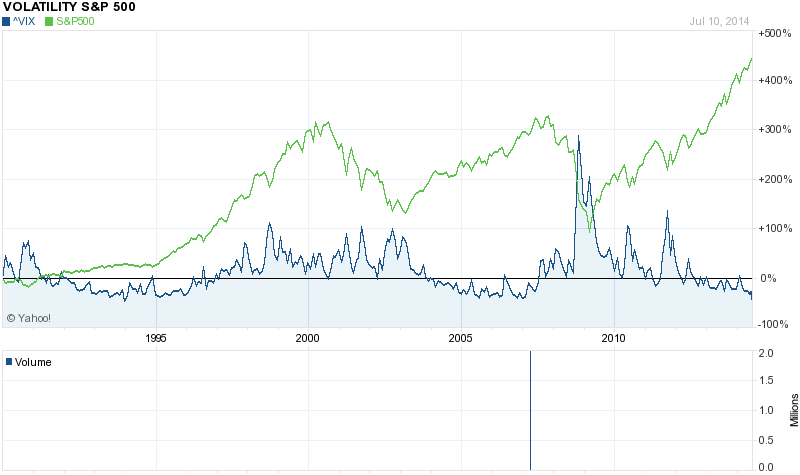 You will note that the VIX is in the very low, things-are-freaking-wonderful range. That's bad for longs.

The VIX can be a leading indicator to the market. When the VIX dropped in 2007/8, the market followed. But it is a contrary indicator, not a precise market timer.

According to research by CXO Advisory Group, between 1990 and 2005, an extremely high VIX was followed by periods of high returns on the S&P 500 index in both the short term (one month) and medium term (one year).

This is what I mean when I say buy fear and sell greed.

Last month, the Volatility index hit 10.61, close to an all-time low. This is undoubtedly a sell signal. The problem is that the market can go up for years before the bottom drops out.

You may not know it, but the best-performing strategy for 2014 so far has been to buy the most heavily shorted stocks and ride the short squeeze.

We've done this a number of times in Crisis and Opportunity, most notably with the 500%-plus return from Plug Power.

At some point, the shorts will win... but not yet.

Shorting stocks in a market that is controlled and manipulated by the Fed, dark pools, and high-frequency trading has been a death wish. Logic won't win when the combined powers of government and Wall Street are against you.

The Truth Will Out...

Volume has been falling for years at the same time the markets are hitting new highs. At some point, we've gone from a market of buyers and sellers with open price discovery to something else.

The upshot of this is that I'm finding it very difficult to find value. For example, one might expect the Tel Aviv Stock Exchange to sell off during the most recent fighting with the Palestinians.

But no, the TA100 is just off its 52-week highs. That's not a fear-induced, “blood in the streets” play; it's a buy-the-dip, Seeking Alpha, greed-based, ignore-the-risk gambit.

Something similar happened during the Thailand coup. Russia's market actually went up after its Crimea annexation. When investors pay a premium for higher risk, something is out of whack.

No Fear is Bad

To bring it closer to home, every week, I run a super-value screen. Here are the parameters:

For the last two weeks, there has been zero, none, zip, nada.

If all the value investors have bought all the value stocks including Chinese real estate, who is left to buy? And if there is someone left, what are they buying?

Gold, perhaps: Our Allied Nevada (NYSE: ANV) play is up 20%. But you'll remember that in the last crash, gold miners got crushed by margin calls just like everything else.

I'm not a seer or a witchdoctor. I can't see the future. But if the past is prologue, it is time to build some cash and hope for a sell-off.

One catalyst might be a second quarter GDP miss. First quarter was down 2.9%. A second negative number would put us in an official recession. Poor retail sales, higher energy prices, a high number of new part-time jobs, and a decline in full-time jobs doesn't bode well.

Remember, the secret to investing is showing up with the cash when assets are cheap and bodies are piling up... and then having the stones to buy when everyone is selling.

I'm not saying to get out now with everything. I'm saying it might be a good idea to take some profits while you have them and build a cash pile.

Hamas Stalls Israel's Leviathon?
Energy and Capital editor Keith Kohl reports on why Israel's Leviathan natural gas field may be in danger.
Hydrogen Fuel Cells: The Downfall of Tesla?
Lithium has been the front-runner in the battery technology market for years, but that is all coming to an end. Elon Musk is against them, but Jeff Bezos is investing heavily in them. Hydrogen Fuel Cells will turn the battery market upside down and we've discovered the tiny company that is going to make it happen.