The Mexican Libertad is one of my favorite bullion coins. The Libertad is produced by the National Mint of Mexico and is available in both .999 fine silver and .999 fine gold.

The current obverse of the Libertad design features the winged goddess Victoria perched upon a column triumphantly outstretched holding a laurel wreath. In the background, the Victory goddess is flanked on both sides by the volcanoes Popocatépetl and Iztaccihuatl.

On the right is Popocatépetl (also called “the Smoking Mountain”), an active volcano. On the left, is the dormant Iztaccihuatl (also called “the White Woman”). These volcanoes are named after the tragic legend of two star-crossed lovers, which goes something like this:

Thousands of years ago, when the Aztec Empire was in its heyday and dominated the Valley of Mexico, it was common practice to impose a mandatory tax neighboring towns. This taxation did not sit well with the indigenous group known as the Tlaxcalteca, who were bitter enemies of the Aztecs. After a while the Tlaxcalteca became weary of the taxation and the chief of the group decided to fight for his people’s freedom.

When Popocatépetl returned to find his lover dead, he wandered about the streets for several days and nights, until he decided he had to do something to honor her love and to assure that the princess would not ever be forgotten. So Popocatépetl ordered a great tomb built under the sun, piling up ten hills together to form a huge mountain.

Popocatépetl carried the dead Princess in his arms, took her to the summit and laid her on the great mountain. The young warrior lovingly kissed her cold lips, took a smoking torch and knelt in front of his beloved to watch over her eternal sleep.

From then on, they continue together, facing each other. Eventually the snow covered their bodies, forming two majestic volcanoes that would remain joined till the end of time. The legend goes on to say that when the warrior Popocatépetl remembers his beloved, his heart that preserves the fire of eternal passion shakes and rains fire on Earth in blind rage at the loss of his beloved.

The current reverse of the Mexican Libertad features the coat of arms of Mexico, surrounded by other historical Mexican coats of arms.

The Mexican coat of arms is a Golden Eagle perched atop a prickly pear cactus on a stone in the water clutching a snake. This image is based on the legend of the founding of the holy city Tenochtitlan, which goes something like this:

In the beginning, the Mexica people emerged from the womb of the Earth; a place called Chicomoztoc, which means “seven caves”. They settled in a land of paradise called Aztlán. But, the Mexica lived there under a tyrannical ruling class called Azteca Chicomoztoca.

After centuries of oppression, Huitzilopochtli, the Mesoamerica god of war, the sun, and human sacrifice appeared to the Mexica's highest priest in a vision. Huitzilopochtli ordered the Mexica people to leave Aztlán saying:

“Where you will find an eagle, sitting on a cactus on a stone in the water, tearing with his beak and fangs a snake asunder, there you shall settle.” 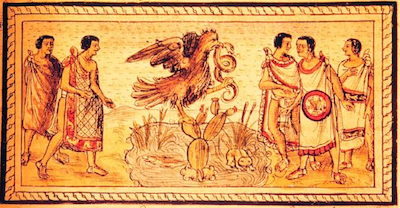 An excerpt from Diego Durán's The History of the Indies of New Spain showing the founding of Tenochtitlan published c. 1581

For the two centuries, the Mexica wandered in the Valley of Mexico, until one day they saw this very sight on a small swampy island in the middle Lake Texcoco. And it was there that the Mexica established the city Tenochtitlan.

On Silver Libertads, these designs overlapped in some mintage years. Here's what both sides of the Libertad has looked like over the years:

Personally, I prefer the older design.

The Mexican Libertad is an attractive bullion coin to own. And it's highly recognizable and accepted and one of the major bullion coins.

I would advise against paying such outrageously high premiums for the Libertad right now. But I suspect that the premium for gold and silver bullion coins will come down next year.

So if you're interested in owning physical bullion coins, check out the Mexican Libertad. They are really neat coins.

Taking Graphene to the Next Level
Energy and Capital editor Keith Kohl shows investors how to hit the ground floor running with a new breakthrough in one critical-to-life mineral.
Silver Coin Premiums
Everyone seems to be jumping into physical silver coins. But before you make the plunge, Energy and Capital editor Luke Burgess has some tips to avoid paying high premiums for silver coins.
Two Silver Stocks for 2016
Energy and Capital editor Luke Burgess takes a look at two silver stocks with good resources, low-cost operations, solid management, and geopolitical favorability to leverage rising silver prices in 2016.
Why I'm Excited About Commodities Right Now
Commodities are crashing. Hard. They have been for about four years now. And I'm positively thrilled about it.
Hydrogen Fuel Cells: The Downfall of Tesla?
Lithium has been the front-runner in the battery technology market for years, but that is all coming to an end. Elon Musk is against them, but Jeff Bezos is investing heavily in them. Hydrogen Fuel Cells will turn the battery market upside down and we've discovered the tiny company that is going to make it happen.