With the wild ruckus raging over Supreme Court decisions lately, you’d think that all its surprise rulings were over and done with.

But it turns out it wasn't finished infuriating the left side of the aisle.

Yesterday, the highest court in the U.S. ruled that the Environmental Protection Agency (EPA) doesn’t have the authority to set standards on climate-changing greenhouse gas emissions for existing power plants.

Immediately, a chorus of cheers went up for the coal industry.

Judging by the reaction so far, it feels as if investors were preparing for a tidal wave of coal profits to wash over their portfolios going forward.

And with the EPA effectively handcuffed, perhaps you’re wondering if it isn’t time you put some skin in the game.

Unfortunately, I have some bad news for you.

Look, it’s difficult to find a sector that has been beaten down more than coal during the last decade. And I know I take an immense amount of pride in the energy profits we’ve gleaned over the last two years — specifically the best and brightest drillers in the oil industry.

After all, we watched shares of Diamondback Energy surge 370% higher since the COVID lockdowns began.

I don’t care if it was your first trade or if your last name is Buffett — that’s a monumental gain for any portfolio.

However, few investors have realized that, despite the anti-coal fervor that has gripped Europe and the United States, some coal stocks have been on a monster run during the COVID pandemic.

And make no mistake, some of the best coal stocks out there have radically outperformed their counterparts in the energy sector.

Had anyone had the foresight to pop some of their cash into Natural Resource Partners since the pandemic started in March 2020, they could have seen gains of as much as 565%.

Of course, your excitement would peak again the moment you saw yesterday’s SCOTUS ruling that narrowed the EPA’s authority over emissions on existing plants.

You might even be tempted to dive right back in headfirst.

Then again, that would be one colossal mistake.

One of the most bearish charts I’ve ever come across speaks volumes for coal’s future.

However, most of the investment herd has missed the fact that we’re using far, far less coal than ever before. Not only are we no longer building any new coal plants, but the ones we do have operating are ancient compared with the rest of our power plants.

One glance below, and you’ll see why we expect a bleak future ahead for the coal industry: 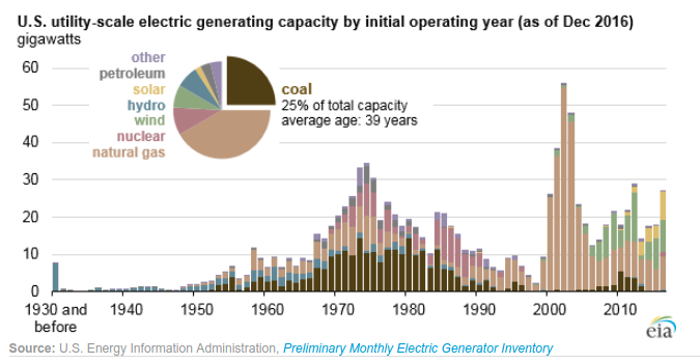 In fact, the average age of U.S. coal power plants today is 41 years.

That’s one of the reasons why the situation will become even more dire going forward. This year, the U.S. is retiring approximately 14.9 gigawatts of electric-generating capacity.

Think it can get worse?

Indeed it can — 23 gigawatts of coal capacity is expected to be shuttered in 2028 alone!

I’ve told you before that nothing will be able to pull the coal industry out of its death spiral.

But that doesn’t mean the news is all bad.

Next week, I’m going to show you exactly why the death of coal is opening up an incredible window of opportunity in another sector.