Who's Afraid of Peak Oil?

Editor's Note: To see an updated chart on how far we now go for oil, click here...

Today, the United States is experiencing a veritable boom in its oil and gas production.

And make no mistake; it's attracting billions of investment dollars from all around the globe.

In fact, individual investors like us have been reaping the benefits, with $100 per barrel now the norm...

So is the outlook as the rosy as it appears, or are these projections creating a future energy scenario that's too good to be true?

Well, you've read the same headlines we have — and certainly the same projections boasting an energy-independent America is just over the horizon.

So the answer is both yes and no.

Before we go any further into these rosy projections, let's take a brief look at how we got to this point...

The Peak of U.S. Oil Production 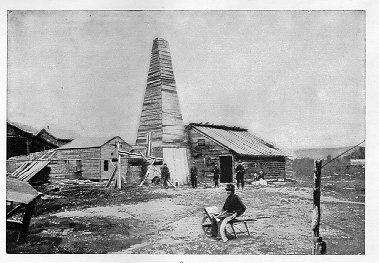 The real show started more than 150 years ago outside of Titusville, Pennsylvania, when the Pennsylvania Rock Oil Company of Connecticut contracted Edwin Drake to find oil.

The first commercial well was drilled at a depth of 69 feet.

Since then, things have been good for the U.S. oil industry.

For a brief time, Pennsylvania was the world's largest oil producer. The success in Titusville spurred a rush of drilling activity, and by the turn of the 20th century, the United States was averaging 174,000 barrels per day.

About thirty years later, our oil production was well over two million barrels per day — and rising fast.

In fact, the United States was on top of the world's oil stage for much of the last century.

One serious problem, however, was that we grew too accustomed to cheap, easy-to-extract oil.

Back in the 1930s, the United States was producing 100 barrels of oil for every one barrel it had invested.

What's worse, it took just one man to bring the good days to an end. Back in 1956, a Shell geoscientist by the name of Dr. Marion King Hubbert gave an ominous speech in which he announced U.S. oil production would peak in the early 1970s.

Simply put, Peak Oil is the point at which oil production reaches its maximum rate, which is then followed by a decline phase — every single oil field on the planet goes through this cycle.

Now, let's be clear here: We're not talking about how much oil is left in the world.

The problem has never been that we're running out of oil; rather, Peak Oil refers to the slowing of the rate at which we can produce it.

Think of it like this: If we could put every drop of oil in the world into one gigantic barrel, yet were only given a small cup to draw out the oil, we'd be in serious trouble. Sure, the oil is sitting right in front of us, but we would be unable to get it.

In the United States, Peak Oil isn't a theory... 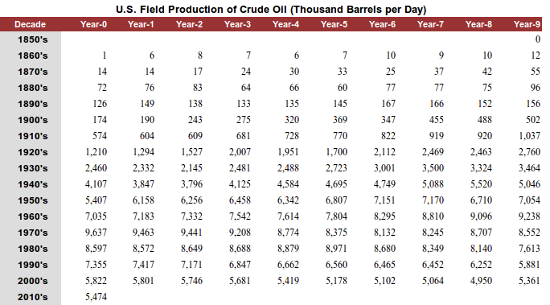 Since then, our country's production has been steadily declining.

How bad have things gotten?

To gain a better perspective of the situation, we'll look deeper into the nation's three largest oil-producing states: Texas, Alaska, and California.

They were the heavy hitters of the U.S. oil industry, the cream of the crop — that is, until Peak Oil took its toll:

In 1981, Texas, Alaska, and California were responsible for over 60% of our domestic oil production.

Approximately 5.1 million barrels a day were pumped from these three states. But by 2005, their share in U.S. production fell to about 50%. Five years later, they only contributed 42% to our total output.

And with the exception of Texas, which managed a modest increase over the last few years, there isn't much hope their production will rebound...

Of course, we've felt the consequences.

Not only has production been declining, but our consumption of petroleum products has continued to increase: 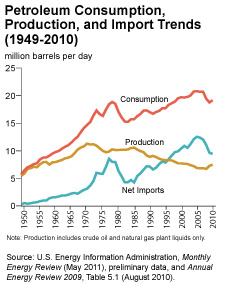 And as you can see, in order to meet our domestic energy demand, our imports of crude oil and petroleum products have more than doubled since the peak.

The result, as you can no doubt guess by now, has been a growing dependence on foreign oil:

According to the latest EIA data, here are our five largest suppliers from last December:

The truth is that we will never top our peak production of 10 million barrels per day.

Even taking the government's optimistic projections, the unconventional boom taking place will only add about 2.2 million barrels of oil to our total.

But here's the rub for investors like us: Our production doesn't have to top our 1970 peak level.

Despite the dismal news concerning our domestic production during the last four decades, a small group of investors has caught wind of a good old-fashioned oil boom taking place on North American soil.

Their success is coming from an unconventional source of oil that is primarily responsible for the recent increase in U.S. oil production.

Everyone wants a piece of the action...