The time to be shocked over triple-digit oil prices has passed.

Maybe four years ago, we could've spared a moment or two.

But today is a much different climate — not only did we expect it this time around... we've been planning for it.

How could they not see it coming?

U.S. oil consumption is back on the rise.

Although we haven't reached 2008 levels, we're slowly making our way higher. And more than ever, we need foreign oil...

But this time around, I'm not talking about OPEC oil.

I've shown my readers this data before. Recognizing this trend has lead to some tremendous investing opportunities.

It's no mistake that we're not looking to OPEC for more oil.

And even though OPEC supplies us with more than 4.5 million barrels of oil every day, there will be a day when that addiction is kicked.

Of course, in order to 'kick' that Mideast oil fix, we'll have to find a suitable replacement.

Again, let the EIA data speak for itself...

According to them, we're buying more Canadian oil than ever before. In December 2010, we imported 2.7 million barrels per day from our neighbors to the north.

If we're going to continue to rely on Canadian crude, remember that their conventional production isn't as rosy as you might expect...

That oil will primarily come from one source: 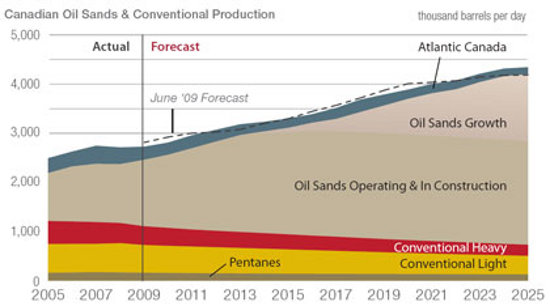 Right now, the Alberta oil sands are in the middle of undergoing a significant change.

If I were to ask you the first thing that comes to mind when I mention oil sands production, what would it be?

Is it one of the massive trucks used for hauling the resource, several tons at a time?

Maybe it's the idea that of those surface mining operations can be seen from space...

But the future isn't in the nightmares of environmentalists...

One of the most underrated facts about the play is that only 20% of the entire resource can be mined. The rest is too deep.

And believe me, they've spent decades running trucks back and forth along those mining roads.

When the Chinese spent billions buying their share of the Syncrude project, they made a fatal error: They didn't take this change into account.

Of course, the technology to reach the rest of the oil sands' resource base isn't a secret.

These companies with experience in in-situ techniques will be crucial to increasing oil sands production.

Securing that future Canadian crude will be invaluable — especially when it comes from a non-OPEC source.

On Monday, I'll tell you all about one in-situ play that's leading the charge.

In the meantime, in case you missed some of our top investment stories this week from Energy and Capital or our sister publications, you can find them below...

Future Fracking: The Next Stage for Shale Production
The debate over hydraulic fracturing will soon reach a feverish peak, and one company holds the answer for both sides. This tiny energy stock is using their revolutionary technology known as “petro-fracking,” and is already gaining a firm foothold in Canadian shale plays. Get in on this play as it sets its sights on the vast U.S. shale plays.

Libya Bombs and Saudi Bribes: The Brink of an Oil War
Editor Keith Kohl looks closer at the potential oil war about to break out from the political unrest dominating the Middle East.

China Buys 47% of the World's Gold: 1.3 Billion Inflation-Nervous Chinese Look to Gold for Protection
Analyst Greg McCoach discusses how rising Chinese gold demand will put significant strain on global supplies — and may be the catalyst that pushes gold prices over the $1,500 level.

From Russia with Love: Changing What You Knew About Oil
Editor Nick Hodge reveals the next countries that will play host to a boom in oil production.

Exxon Mobil No Longer an Oil Company: This Energy is Abundant, Cheap, and Clean
Editor Chris DeHaemer tells readers how to profit from the sea change in energy from oil to natural gas...

The Nuclear Option: The Only Safe Energy Bet to Make
Analyst Greg McCoach gives investment hints on how to survive and profit from diminishing supplies of finite fossil fuels and the nuclear power industry.

Runaway Energy Demand: The Energy Bull is On
Editor Nick Hodge analyzes energy demand for the next 25 years... and reveals the easiest way to profit.

Fish or Cut Bait: It All Ends on June 30, 2011
Editor Chris DeHaemer tells investors how to prepare themselves — and their portfolios — for what's coming this June for the market.