We knew it was coming.

On Tuesday, the Obama Administration lifted the deepwater drilling moratorium. And if there's one sector that has taken a beating, it's the offshore industry.

It didn't matter if a company had a great outlook, or even if they didn't have any connection whatsoever to the Deepwater Horizon accident...

The damage was done.

But as I've been telling you time and again, the United States is going to need that offshore oil. Without it, our 19-million-barrel-a-day addiction will force us to buy crude from the last place we want it: OPEC.

If you haven't noticed, OPEC members already know that $100/bbl oil is right around the corner. Both Venezuela and Libya said that oil should already be in triple-digits, considering the U.S. dollar's weakness.

They're also beginning to realize that nobody is complaining with oil prices above $80/bbl. Although the breaking point in 2008 was $150 per barrel, we're still far shy of that mark.

This week, OPEC announced that production quotas will be unchanged. We know that an OPEC member cheating on their output quota is an all-too-common practice, but it's to be expected now that oil prices are comfortably trading between $70 and $85 per barrel.

2011 is shaping up to be another breakout year for oil prices.

They're not the only ones to think so...

According to The Economist:

In 2011 the fundamentals of supply and demand are likely to exert more upward pressure on prices. Francisco Blanch of Bank of America Merrill Lynch reckons that global demand is set to expand by 1.4m bpd as growth in developing countries offsets a decline in demand from sluggish rich countries. As a result he expects prices to hit $100 next year and to average $85 a barrel over the course of 2011.

Are you ready for it?

Getting back to that beaten-down offshore industry, it's hard for even the skeptics to find a few favorites.

Here are five offshore plays that I've been looking into recently: 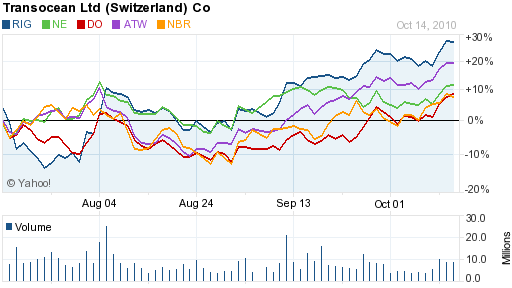 Now that the deepwater drilling ban was lifted this week, those offshore drillers will be under tremendous scrutiny from here on out.

However, it also means that we may see a rush of new permits to unlock those shallow and deepwater fields.

It's only a matter of time.

P.S. As always, I've included some of the top energy stories to cross my desk this week. Enjoy.

Ten Times More Oil Than Saudi Arabia: One Group of Scientists Trying to Change the Oil Industry Forever
All it took was one leaked document, and the North American oil industry was changed forever... A small group of scientists recently made a monumental breakthrough in drilling technology, unlocking billions of barrels of new oil. Keep reading to learn how your chance to take part in the last oil boom could earn you a small fortune.

The Secret Behind the Soviet's Lost Oil Field: How Investors are Banking 900% Oil Gains
Just weeks after our readers were told about this incredible trading opportunity, they struck oil. The result was a return of more than 900% of their initial investment. But the best part is that this story is far from over...

Surveying the Best Global Water Stocks: The Most Overlooked Bull Market
Editor Nick Hodge serves up a slew of water facts, new projects, and plenty of ways to profit.

The 2010 U.S. Agflation Outlook: Why Your Food Bill Could Rocket in November
Editor Ian Cooper takes a look at current agflation fears and offers readers ways to profit

Profiting from Military Green Energy: How the Military's Green Energy Transition Can Make You Rich
Editor Jeff Siegel discusses the military's latest efforts to transition away from fossil fuels.

China Flexes Rare Earth Muscles: The Middle Kingdom Plays its Trump Card
Publisher Brian Hicks tells readers why recent events between two ancient Eastern rivals are a linchpin in the rare earth metals story, and how investors can now be poised for profit.

Dow 20,000: Goodbye, Dollar
Editor Christian DeHaemer explains to readers why the Dow will, in fact, reach its "magic number"... and what this means for our national debt.