I wanted to laugh, but it really wasn’t a laughing matter.

Back in September, Volkswagen was looking to ink $60 billion worth of long-term supply contracts with the world’s top cobalt miners.

That plan blew up right in its face.

And the response above was about as gracious as those miners were willing to be.

Of course, this rejection puts quite a damper on VW’s goal to shift to electric cars — with an investment of more than $24 billion — by 2030.

Don’t get me wrong, dear reader; I don’t want to write off Volkswagen just yet.

After all, we’re still in the very early innings of this game.

But there’s one reason companies like Tesla and Volkswagen don’t have the advantage when it comes time to negotiate these contracts with cobalt miners.

Sometimes a chart can say a thousands words, so keep this one in mind: 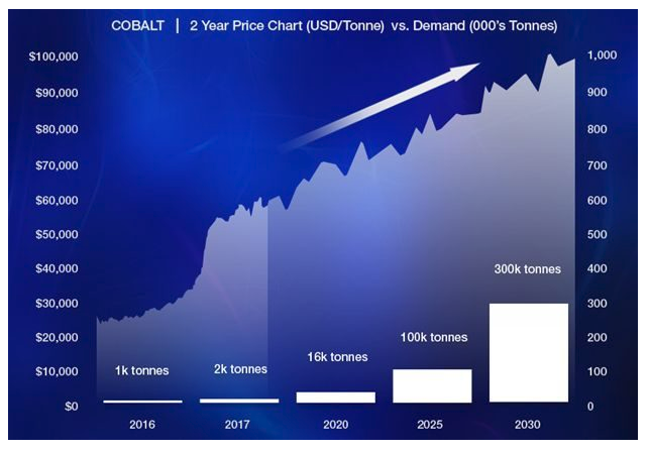 The situation may not seem crisis-worthy to some today, but that could be even worse for anyone unconcerned with securing their future cobalt supply.

No, this situation is going get much, much worse.

Well, it will for some…

Look, it pays to have a little foresight.

In the case of cobalt, it will mean the difference between taking control of the EV revolution and filing for Chapter 11.

And it’s clear that Volkswagen will drive itself to the verge of collapse if it continues to think it’ll be able to take advantage of the world’s cobalt suppliers.

Years ago, when Tesla’s Gigafactory-1 was just a thought in Elon Musk’s mind, he knew its location would be paramount for its success.

Yet, there was one blunder of his own that has been grossly overlooked by the market.

You see, when the Gigafactory-1 was still in the planning stages, the company announced it would source its raw materials locally.

This is far more ambitious than you might think… and one incredible window of opportunity for average investors like us.

If you’ve been following me lately here on the pages of Energy and Capital, then you know just as well as I do that there’s a serious crisis buried in the world’s cobalt supply.

We’re talking about an industry where 60% of supply is directly involved in some of the most horrific instances of child exploitation in the world.

Some have even started calling cobalt Musk’s Blood Metal.

At the point in time when Tesla’s Gigafactory was being constructed, the U.S. hadn’t mined for cobalt in over 40 years.

Take one more look at that demand chart above for cobalt.

This is more than simply a Tesla problem.

Volkswagen, Daimler, BYD, Ford, Mercedes-Benz — all of these automakers will be fiercely fighting to secure their own supply!

And this is just for vehicles.

Even the tech giants aren’t immune to this crisis.

Apple has come out and stopped all purchases of cobalt from artisanal mines (think small-scale cobalt miners working independently of the major mining companies).

This is the future decision that EVERYONE will be forced to make over the next decade.

As for Musk, he’ll be less concerned than the rest…

It’s not pure coincidence that he chose Nevada for the location of his first Gigafactory.

And you can pick up shares for around a buck.

But don’t take my word for it… I strongly urge you to check it out for yourself right here.

My colleague, Christian DeHaemer, just exposed a serious cover-up by some of the biggest banking institutions in America.

I can’t get into the details here… this is something you need to see firsthand.

The moment I read through his evidence, a chill ran down my spine.

It’s a massive gold scandal on an unprecedented scale — one that stands to make individual investors a veritable fortune.

You can’t afford to sit on this one.