U.S. LNG Booming, But Russia Stands in the Way

The U.S. liquefied natural gas (LNG) market is the fastest-growing and most potentially profitable sector of fossil fuels for both individual investors like you and me and the American economy as a whole. It's big.

But there's one major obstacle that threatens to disrupt the U.S. LNG market over the next few years: Russia.

Let me back up for a moment...

LNG is a recently developing market. But it is not new. It actually dates back to the early 19th century with a number of fabulously prominent scientists doing experiments and developing processes for cooling and liquefying natural gas including Michael Faraday, James Joule, and William Thomson (a.k.a. Lord Kelvin).

It wasn't until 1912 that the first LNG plant was built in West Virginia. Then in 1941 came the first U.S. LNG production and regasification facilities in Ohio.

Still, there was a problem for the LNG market: There was little need for liquefied natural gas domestically, and the U.S. didn't produce enough to make it a major export.

Pipelines had already been in use for decades by then to transport dry natural gas domestically and were simply a cheaper method of distribution. Meanwhile, the demand for natural gas rapidly rose during the post-war era, straining domestic supplies.

The technology for natural gas liquefaction and regasification has dramatically advanced. And the fuse for the LNG market is lit with the signing of the Energy Policy Act of 2005. This act directed the Department of Energy and the Department of the Interior to begin a program to lease federal land for commercial oil shale production. From there, the shale boom began.

In addition to turning the U.S. back into the world's largest oil producer, the shale boom also uncovered a massive previously untapped reserve of natural gas... so much, in fact, that LNG could become a significant export market. 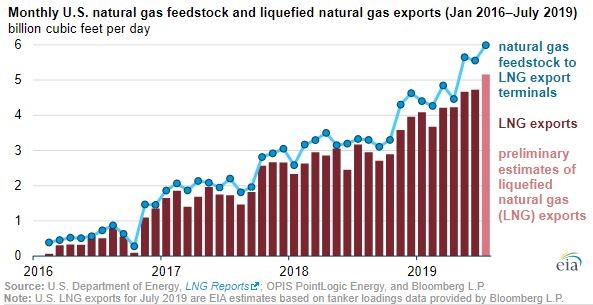 In the first seven months of 2019, natural gas feedstock deliveries to LNG export facilities have been the fastest growing among all U.S. natural gas consumption sectors. Natural gas delivered by pipelines to Mexico and to U.S. LNG export facilities reached 10.9 Bcf/d in July and averaged 10.0 Bcf/d in the first seven months of this year, 30% more than in the same period of 2018. The United States has been exporting more natural gas than it imports on an annual basis since 2017, and EIA expects that U.S. natural gas exports will continue to increase as new LNG facilities come online.

Right now the U.S. is the fourth largest exporter of LNG in the world. By 2024, it's expected to be #1. And a lot of that growth has to do with exports to Europe.

Because a month later, former Energy Secretary Rick Perry signed two export orders that will more than double America's LNG exports to 112 Bcf by next year.

And the European Commission says LNG imports could increase from there to 282 Bcf by 2023!

But as I mentioned, there's one big obstacle to U.S. LNG imports to Europe, and that's Russia.

Two days ago, Vladimir Putin met his Turkish counterpart in Istanbul to inaugurate a brand new pipeline that will transport Russian natural gas to Turkey and be distributed to European markets from there.

The 580-mile pipeline, called TurkStream, is actually two pipelines running next to each other under the Black Sea. Together they have an annual capacity of over 550 billion cubic feet. Putin said at the inauguration ceremony that TurkStream was a sign of “interaction and cooperation for the benefit of our people and the people of all Europe, the whole world.”

Last month, the U.S. Senate approved a defense bill that imposed sanctions related to the TurkStream pipeline “to deter Russian aggression.” However, it's reported that Russian gas deliveries to Europe have already begun.

It's clear Russia intends to compete with the U.S. for the European gas market. That creates an environment for more strife between the U.S. and Russia — which, depending on the administration, could result in all sorts of new geopolitical messes.

But one thing seems certain: The short-term U.S. LNG market will be heavily dependent on how well it can compete with Russian imports to Europe.