Prices Up This Year, Still Down Historically

It's been quietly happening all year.

But with an eye on Europe, easing, and an election, the country has yet to pay attention.

You have a chance to act now — and be in a position to profit when they figure it out.

I'm talking about housing, for which prices have risen every single month since February.

And not just in certain markets, either.

The S&P/Case Shiller index has clocked steady gains in every single city it covers for several months in a row. And the gains are more than modest.

In August U.S. home prices climbed 4.6% over last year, the largest year-over-year increase in over half a decade... that is, until September, when they grew another 5.7% and erased the last two years of continued price slides.

Housing prices are now back up to 2010 levels.

Long Way to Go, Short Time to Get There

As both the value of homes and the volume of new homes have risen, a sweet spot has been created for investors.

Because housing starts are way up, the market has rewarded homebuilders. PulteGroup (NYSE: PHM), the country's largest builder by revenue, is up 214% in the past year. It's currently the best-performing stock in the S&P 500.

Since January, the Dow Jones U.S. Home Construction Index is up 80%, while the broader market has only risen by 12%.

Some investors are bullish, noting that during the boom of the early oughts housing stocks surged over 350%, the implication being this rally still has further to go...

I say it's too far, too fast in the new normal. The monstrous rise had much to do with why we witnessed the Great Recession to begin with, and investors are once bitten twice shy. They'll take profits long before these stocks have a chance to rally several hundred percent.

Look at this chart from the Wall Street Journal:

Home sales are down 70% from their 2005 and 2006 highs, and the market is still flooded with houses either for sale or in foreclosure.

There's still a long way to go until that excess demand is absorbed.

So while it may be too late to get in housing stocks, it's still extremely early for a few other plays...

The first is income plays on rent.

According to Zillow.com, average monthly rental income is up 6% over the past year.

Real Estate Income Trusts (REITs) that generate revenue from rent must pay out no less than 90% of their taxable income as dividends... and are a great way to play the unique housing situation I've just described.

Hungry for income, investors have poured almost $11 billion into these types of funds so far this year — more than 2010 and 2011 combined.

They pay 4% on average, but we've found one that pays much higher on a monthly basis.

The second is to own.

Remember, home sales are still way down and the market remains flooded. 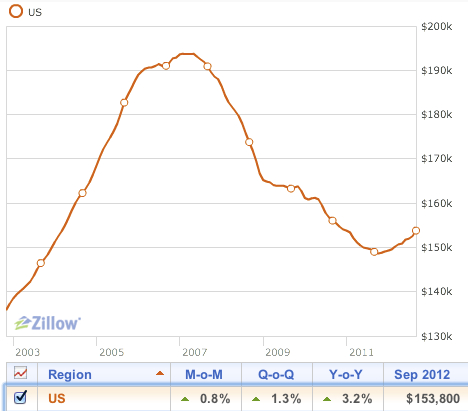 There are plenty of good deals on the still-overstocked inventory out there.

And with interest rates still incredibly low thanks to the Fed's continued action, it's possible to buy cheap and take advantage of still-rising rental incomes and home value appreciation.

You don't have to buy conventionally, either, paying tens or hundreds of thousands for a new or pre-existing home...

I've found a way to purchase homes for under $10,000 — and sometimes under $1,000 — thanks to a small government program. I've met with government representatives and professional housing investors to learn the ins and outs of this program, and I'm currently writing a report on how you can take advantage. It'll be out next week.

For now, take a closer look at the rental income opportunity I mentioned earlier.

And if your home was in the path of Sandy, I hope it and your family are safe.