Trust Yourself, Not the Experts

Predictions are so difficult, even for the short term, due to many variables — known and unknown — that can make experts look foolish.

That goes especially for some of the powerful people on the planet...

Forbes even named the current Fed chair, Janet Yellen, the seventh most powerful person in the world!

So why is the Fed chair such a powerful position?

Simply put, they control the supply of money in the U.S. economy, regulate private banks around the country, and have the power to make emergency loans... as we saw during the 2008 financial crisis. The influence of the Fed over global financial markets and the U.S. economy is immense.

It’s safe to say that the Fed chair has information on and insight into the U.S. and global economies that many would give their right arm to have.

Imagine the Fed chair whispering in your ear and telling you what is seen from their high perch on the economic food chain.

You couldn’t help but make millions, and possibly billions, of dollars from such advice... right?

The good news is that the Fed chair does speak publicly, sharing views on the economy and markets. 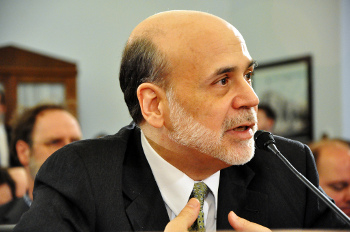 Fed Chair Ben Bernanke was in the hot seat during the worst economic crisis the U.S. has gone through since the Great Depression.

As the housing market was beginning to go bust and subprime loans were going belly up, Bernanke gave a speech at the Federal Reserve Bank of Chicago on May 17, 2007.

The concern at the time was what impact the subprime market would have on the housing market and the rest of the financial system.

Bernanke said, “we (the Fed) do not expect significant spillovers from the subprime market to the rest of the economy or to the financial system.”

It’s fair to say that Bernanke got this prediction very wrong... very wrong.

In addition to throwing the U.S. economy into a recession, the subprime market bust caused a number of major brokerage firms and banks to fail in a very short period of time. Warren Buffett called it an “economic Pearl Harbor” as the U.S. financial system ceased to function. 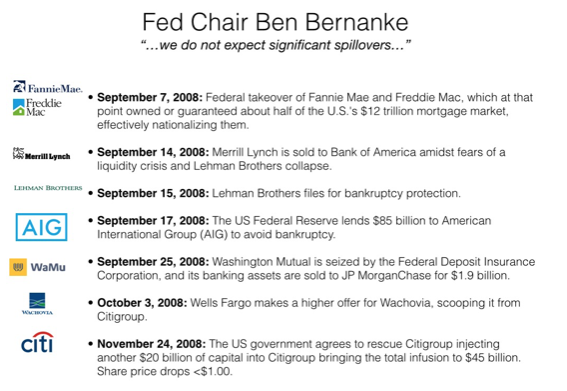 Less than 10 months after his speech, Bear Stearns was sold in a fire sale to JPMorgan Chase for $2 per share... less than 70% of its market value only two days earlier.

In September of 2008, the Federal Housing Finance Agency (FHFA) placed Fannie Mae and Freddie Mac under the conservatorship of the FHFA. A few days later, Merrill Lynch was acquired by Bank of America, and Lehman Brothers filed for Chapter 11 bankruptcy — the largest bankruptcy in history.

The next two weeks brought more calamity to the financial system: insurance giant AIG’s credit was downgraded, and it needed to be bailed out by the Federal Reserve; Washington Mutual Bank was seized and placed into the receivership of the FDIC; Wachovia Bank was acquired by Wells Fargo; and Citigroup was declared insolvent and needed to be bailed out by the Fed as its share price dropped below $1.00.

Even Bernanke, with vast amounts of data, couldn’t foresee the havoc that the housing bust would have on the financial system and the U.S. economy.

So, at the very least, you and I can take comfort in knowing that even the most powerful people, with access to sources and data we could never dream of having, can’t consistently make correct predictions.

But here's the catch... we don’t try to predict where stocks are headed. More often than not, trying to do so is an exercise in futility.

Instead of trying to predict where stock prices will be in the near future, we stick to the facts and our analysis.

When the so-called “experts” were expecting slower growth and a tough retail environment, I recommended off-brand retailer TXJ Companies (NYSE: TJX) when it was trading for a song. That recommendation has so far returned more than 306%!

If you’re going to invest by listening to what the experts predict, I highly suggest you consider this old saying: “He who lives by the crystal ball soon learns to eat ground glass.”

Instead, follow an approach that looks to buy dollar bills when they are trading for 50 cents. That’s how the really wealthy on Wall Street got that way.

Those stocks aren't always easy to find, but they're certainly out there.

But it's not enough for me to just tell you that... I want to show you!

I've actually uncovered 12 stocks that are trading at a discount right now. And as a member of the Energy and Capital investment community, I want you to see these undervalued companies for yourself.

In fact, those of you that checked out my investment gems last week... congratulations! You would have already had posted a 15% gain from Western Digital Corp. (NASDAQ: WDC), which is still trading at a bargain price.

You can access your report — absolutely free of cost — by simply clicking here.