Trump's Infrastructure Bid to Include Renewables

Oil and gas won't get all the upgrades...

If you’re worried that President Trump’s single-minded push for a fossil fuel rally will hurt renewables… you shouldn’t be.

Even though it seems like he’s got the power to shut it all down, it's just not that easy.

He may even be supporting renewables without even realizing it!

Just this week, a group of 12 Democratic governors and 8 Republican governors sent Trump a letter asking him to better support offshore wind and utility-scale renewables, as well as upgrades for the U.S. energy grid. 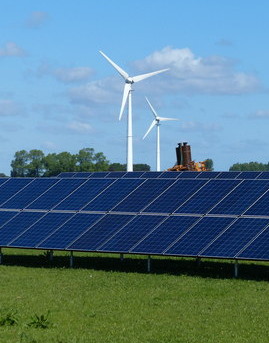 Any and all improvements will be a huge boon to renewables like solar and wind, which are expected to see some of the fastest growth of any energy source in coming years.

The 20-governor coalition noted in their letter that they believe “expanding renewable energy production is one of the best ways to meet the country’s growing demand for energy.”

Trump may not agree wholeheartedly, but he can't knock renewables altogether either.

You see, while he isn’t all that worried about climate change or carbon emissions, much of his campaign has focused on creating jobs for American workers.

According to the U.S. Department of Energy, solar alone now accounts for 43% of all U.S. energy jobs. Wind and solar now offer more new jobs than coal, oil, and natural gas combined!

If Trump really wants to see more jobs on the market, he’ll agree to the coalition’s requests for more research and development funding for renewables.

Right now, our president is working on divvying out a $1 trillion investment into replacing and upgrading aging U.S. infrastructures.

Those grid upgrades will be necessary anyway to cover growing U.S. energy demand.

And with those upgrades will come new large-scale solar and wind installations, no matter how hard Trump is pushing fossil fuels.

This isn’t the first group to implore Trump directly for more investment in renewables. Earlier in the near, more than 760 companies, energy and otherwise, wrote their own letter urging him to uphold support for the growing renewable industry.

Thing is, he doesn't have to come out and say he supports it. Both solar and wind are going to keep expanding, whether they get Trump's money or not.

The Wind Blows, the Sun Shines, and Coal Struggles
Energy and Capital editor Keith Kohl explains why investors should embrace the growth in solar and wind energy.
Donald Trump Investing Big in Wind Energy
Wind Power has the most to gain from the Trump Administration. Will Donald Trump go down as one of the biggest advocates for renewable energy?
Trump's Nuclear Revolution
The best performing mining sector of 2017 so far isn't gold or any precious metal... and it isn't lithium or even some kind of rare earth element. The hottest mining sector right now is uranium.
Trump's Bid to Save Coal Will Kill It Faster
Donald Trump has a lot of ideas about the fossil fuel industry and how he plans to "save" coal from destruction. Energy and Capital editor Megan Dailey explains why she thinks he's missing the point here...
Hydrogen Fuel Cells: The Downfall of Tesla?
Lithium has been the front-runner in the battery technology market for years, but that is all coming to an end. Elon Musk is against them, but Jeff Bezos is investing heavily in them. Hydrogen Fuel Cells will turn the battery market upside down and we've discovered the tiny company that is going to make it happen.