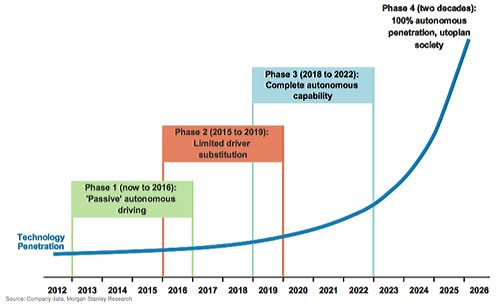 There are few trends in today's market that you know absolutely without a doubt are going to happen. One of them is that self-driving cars are not only coming — they're coming fast.

In fact, this trend is moving like a rocket ship. The compound annual growth rate of these cars is estimated to be 135%.

The big names in auto-autos are Google and Tesla. Both of these companies might make fortunes over the next few years, but it won't be because of their self-driving divisions.

No, much like the Levi Strauss who sold jeans and John Studebaker who sold wheelbarrows to the gold miners during the California gold rush of 1849, the people who sell the parts for self-diving cars will see the fat profit margins as cash comes rolling in.

You can split your parts suppliers into a number of categories. There will be the general parts suppliers who already work with the major car supply companies, like Delphi (NYSE: DLPH).

There will also be profits in mapping companies like Garmin, microchip companies, and software groups. Software will become more important as cars talk to one another.

Already, major luxury brands use many driver-assist features such as breaking, lane changes, and pedestrian sensing. Soon you'll be able to lock onto the car in front of you like Maverick from Top Gun. He breaks, you break. He goes, you go. Think about that tonight as you do the two-pedal, taillight-nightmare dance home. 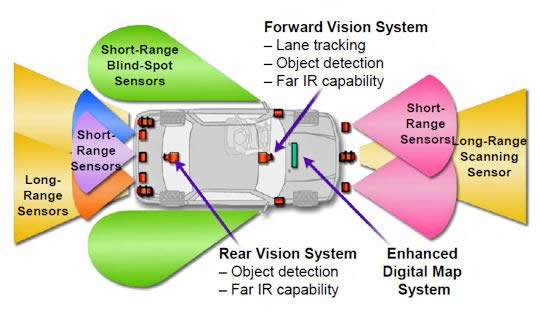 As more features are added, the line to Level 4 fully autonomous cars will blur. Already, sales for sensors are soaring. German parts maker Bosch says Advanced Driver Assistance Systems (ADAS) sales will hit $1 billion next year. Business Insider says ADAS will be an $87 billion market in the next decade.

But the real growth kicker will be the bureaucrats. Right now, the National Highway Traffic Safety Administration (NHTSA) has mandated backup safety cameras for next year and has toughened crash-test rating standards.

According to USA Today, one of the changes is:

A new rating to gauge a vehicle's use of nine advanced technologies such as forward collision warning, automatic emergency braking and lane departure warning.

That's significant for the automotive industry because it could prod manufacturers to turn often-optional but highly profitable safety systems into standard technology.

I've found three undervalued, little-known companies that will make huge money on the parts and systems in the ADAS or autonomous cars systems over the next 10 years.

But don't wait. These companies won't be cheap for long. Car sales are having a record year.

Students Get Screwed
DeHaemer talks about the biggest debt bubble of all...
Seven Bold Predictions for 2016
The best-performing market next year, plus six other bold predictions for 2016.
Best Potential Returns from Oil
Christian DeHaemer tells you which stocks will return the most if oil prices return to $100. Plus, the top four oil producers are dropping bombs.
Hydrogen Fuel Cells: The Downfall of Tesla?
Lithium has been the front-runner in the battery technology market for years, but that is all coming to an end. Elon Musk is against them, but Jeff Bezos is investing heavily in them. Hydrogen Fuel Cells will turn the battery market upside down and we've discovered the tiny company that is going to make it happen.