The Summer of Destruction: How to Successfully Trade Oil

Is this the summer of destruction?

At this point, the only thing that is going to lower oil prices isn’t some last-second policy thrown together by the White House.

No, regardless of the political promises made to us in Washington, there’s no more time left.

The last grains of sand in the hourglass fell last weekend when the summer driving season officially kicked off.

How bad have things gotten? Well, just consider that prices at the pump in the Gulf Coast region, where over half of our country’s petroleum refineries are located, have risen above $4 per gallon.

We'd at least think that prices would be lower in an area that produces more gasoline than anywhere else in the United States.

Unfortunately, that’s not the case.

But again, this isn’t a sudden revelation to our investment community here at Energy and Capital.

We knew that an extremely tight market would be the fundamental catalyst to pushing crude prices over $100 per barrel.

And the only question left for you now is: What can an investor do?

The Summer of Destruction

Look, I mentioned last week that higher oil prices were in and of themselves a cure. This is simply due to the cyclical nature of oil markets.

Right now, we’re seeing supply constraints from years of underinvestment in the upstream sector. Remember, higher prices are needed to encourage more drilling, and the tight oil companies that survived the last oil price crash learned their lesson not to overspend.

Under normal conditions, a high-demand environment (like the summer driving season, for example) would put pressure on inventories that had a chance to build over a certain period of time.

A well-stocked inventory of crude oil could be drawn as new supply starts coming online.

But higher inventories won’t come to the rescue this time around. U.S. stockpiles of crude oil have been well below the five-year average since the end of 2021.

What will definitively offer us some relief at the pump?

First and foremost, demand destruction needs to set in.

The problem with this is that we’re coming out of a pandemic that lasted two years.

If you recall, petroleum demand plummeted roughly 40% back in the summer of 2020. Today, our daily petroleum consumption is only about 7% below what it was at this point in 2019.

At the beginning of May, I told you that oil prices have been consolidating just north of $100 per barrel and that all we needed was a jolt in consumption.

Did that breakout just occur? 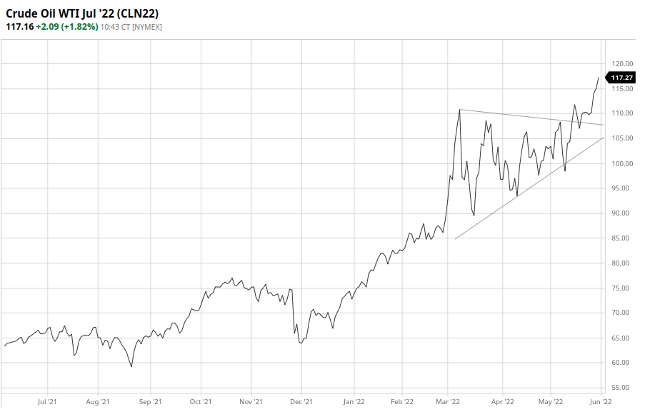 Although there’s still some room to run as E&P companies in the U.S. oil patch rush to bring new supply to market, the drillers won’t be the most profitable oil stocks this summer.

So how do you successfully trade $120/bbl oil?

For that, it’s time to look into the players selling that new oil hand over fist right now.

If you haven’t yet, it’s time you take a second look at the refiners.

Marathon Petroleum (NYSE: MPC) is currently the largest U.S. refiner by market cap and holds a total throughput capacity just shy of 3 million barrels per day. Given that the stock is trading at just 6x its trailing earnings, don’t be surprised to see Marathon report a rock-star third quarter.

Even President Biden understands that it’s time for our refiners to shine. He’s directing his administration to reach out to the oil industry to restart idle refineries that were shuttered back in 2020.

If the president is taking these drastic steps to get more fuel to market, what does he know that we don’t?

The timing here is crucial because at some point, demand destruction WILL set in and push us into the next part of oil’s market cycle.