The Right Time to Buy Coinbase (NASDAQ: COIN) Is in October

Initial public offerings come and go but when they first go public, they are surrounded by hype that would make P.T. Barnum proud. There is an ass for every seat and a share for every speculator.

It debuted at $380, popped to $430, where some unlucky schlub bought it, and then it sold off. It has since bounced around on low volume around $330 a share. 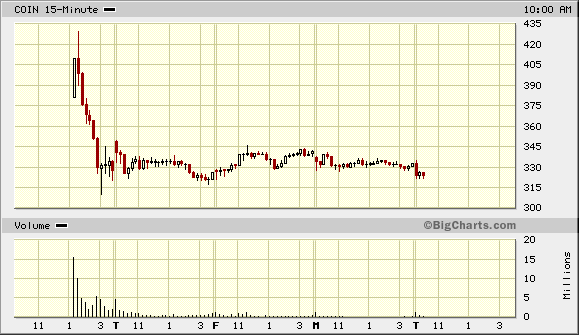 Coinbase provides financial infrastructure and technology for the crypto-economy. That is, the company has created “a platform to invest, store, spend, earn, and use crypto assets; an online marketplace for hedge funds, money managers, and corporations; and a platform with technology and services to developers, merchants, and asset issuers that enables them to build applications that leverage crypto protocols.”

To the retail client, it's just like a broker for crypto. You sign up, provide some info, upload a picture ID and a way to fund your account like PayPal, a credit card, or wire transfer, and you're in business.

The irony is that the great crypto broker is listed on the Nasdaq, trades in dollars, and requires a bank to use.

Buy COIN at the Right Price

As I write this, Coinbase has a market cap of $63 billion on sales of $1.23 billion. COIN has a trailing price-to-earnings ratio of 217 and a price-to-book of 44. In other words, it's expensive. This isn’t a stock for widows, orphans, or anyone who believes in fundamentals.

No, it's a growth momentum stock. And speaking to that, it has a year-over-year revenue growth rate of 257% with 25% margins. It has over 56 million users and trades more than 30 cryptocurrencies.

I have an account with Coinbase, and it seems to work as you would expect. It’s a growth stock you want to own at the right price.

However, despite what you hear on television, the best time to buy a hot IPO is six months to a year later, depending on when it releases most of its shares into the market.

Remember Beyond Meat (NASDAQ: BYND)? It shot out of a cannon for its IPO and went from $40 to $240 — which was a great run. Congrats if you were a part of it. 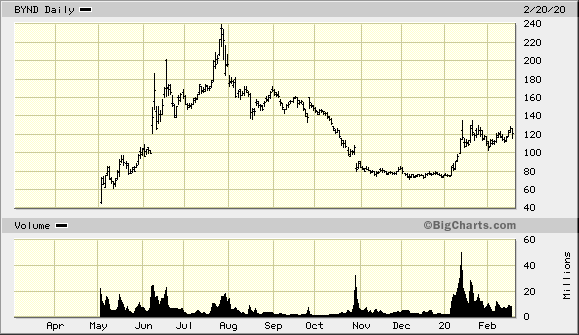 But then it tanked and, given the volatility, if you held it through the sell-offs going up, you would have held it most of the way down.

However, if you bought when most of the IPO shares become tradable, which happens six months after the IPO (usually— note the volume spike in November), you would have bought at the low and would be holding with a solid gain.

This happens over and over again. Google (NASDAQ: GOOG) was selling below its IPO price a year later. The same was true of Facebook (NASDAQ: FB), Uber (NYSE: UBER), and Snap (NYSE: SNAP).

Like most things in life, Wall Street is a racket. It releases a limited number of shares coupled with the hype machine. Insiders go on TV and post on social media, and then they release a handful of shares.

Coinbase for example has 36 million shares in the float — that is, shares tradable by you and me now — but it has 199 million shares outstanding, which will be tradable in the future. This future float will drive down the share price at which point you can buy it as an investment at the lows.

The secret to buying a hot IPO is patience.

Or you can find hot IPOs from six months or a year ago. Snowflake (NYSE: SNOW) comes to mind, and it just had its unlock date last month.