The Reality Behind Burning Ice for Energy

Have you ever tried to light a piece of ice on fire?

Don’t worry, I’d like to think there aren’t many people who have tried.

But like most of you, I hate to see a profitable energy resource go to waste, and that may be what’s happening right now to the world’s vast reserves of methane hydrates.

Now, even though methane hydrates have seemed like a pipe dream, they’ve certainly appeared on our radar in the past. I first started telling my readers about this massive gas resource about 11 years ago.

Every once in a while, we'd revisit the subject to see if there had been any progress. It’s easy to get excited over such a huge energy resource, but I couldn’t help but wonder if it was more wishful thinking.

Because of the high-pressure, low-temperature environment required to make methane gas into “fire ice,” most of it is found in centuries-old permafrost or in the deepest depths of the ocean.

And yes, you can actually light this ice on fire if you hold it in your hand: 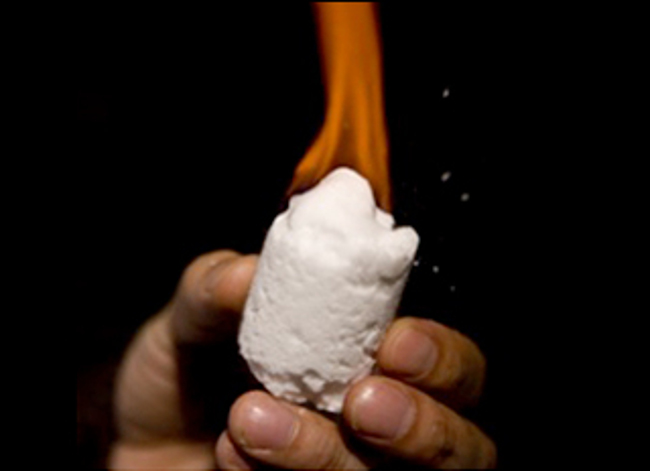 It’s so dense, in fact, that just one cubic meter of the stuff amounts to about 164 cubic meters of untouched natural gas! And it comes this way naturally, no extra work required.

Unfortunately, this means that it can be released naturally, too.

You see, when methane hydrate melts, it turns back into a gas and dissipates into the atmosphere. And methane, as you probably know, is one of the most potent greenhouse gases in the world.

As it stands, every bit of “fire ice” that gets too warm is leaked into the air and becomes wasted energy, and it adds to the greenhouse gas problem as well.

So what’s the obvious solution here?

You might be surprised to learn who’s going after this resource... and it isn’t the United States.

Right now, China and Japan are doing just that. 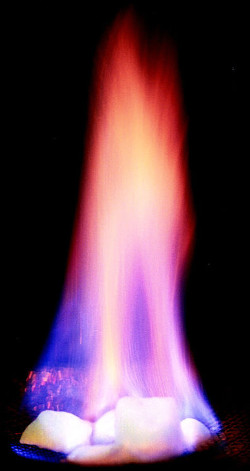 Not only did the country manage to harvest this resource out of the South China Sea for several weeks straight, but production reached about 16,000 cubic feet of gas per day.

What makes this such an achievement is that our “fire ice” has some pretty weird chemical properties.

For one, it’s not just frozen; it’s crystallized.

The problem, however, is that this crystal structure isn’t stable without extremely low temperatures and extremely high pressure — about three times the normal atmospheric pressure.

Without these factors, the crystal structure breaks down, and the methane gas is freed into the air. Not the best situation for a company trying to extract a product, as you can imagine.

But China may have finally cracked this code.

Instead of struggling with ways to keep the ice solid, the South China Sea project focuses on warming the ice into a gas and capturing it.

It’s a risky process given how harmful methane can be...

But the product was well worth the trouble: It came up as 99.5% methane, meaning the resource will make for some highly efficient energy production fuel.

But this actually isn’t the first time “fire ice” has been brought up from the ocean floor.

In 2013, Japan first extracted methane hydrate using a similar process, but the venture was shut down after the machinery was clogged with deep-sea sand.

This year, the country has come back with a better well, and it’s been a success thus far.

On May 8th we got word that further extraction has been achieved from two wells off the coast of the Shima Peninsula. The tests are ongoing, but the results are already promising.

And it’s about time! After investing $700 million into R&D to get its “fire ice” market rolling, Japan is looking to have its extraction reach commercial levels between 2023 and 2027.

China is only slightly behind this curve, aiming for commercial production before 2030.

It should come as a surprise to no one that these are the two countries pioneering this technology.

You see, China is going through a major energy shift on its own. After decades of being choked with dirty coal smog, the country wants to increase its use of cleaner energy resources.

Granted, it’s still a fossil fuel. But with just a fraction of the emissions of coal, natural gas has become the go-to for the transition into cleaner energy.

Japan took up natural gas for much the same reason. After the 2011 Fukushima disaster shut down its nuclear industry, Japan chose to replace that capacity with gas rather than coal.

Since then, Japan has been the world’s number-one LNG importer.

Now, with these projects finally getting underway, both countries have the chance to tap into yet another resource that could put both on the path to more energy independence.

Burning Ice in the Gulf of Mexico

We aren’t exactly left out in the cold, nor is the U.S. going to be left behind on this potential blockbuster energy source.

The U.S. has its own plans to exploit its “fire ice” resources.

In fact, there’s one extraction study going on in the deepest waters of the Gulf of Mexico.

Drilling began on May 12th with the goal of identifying just how much methane hydrate is available for extraction and the physical makeup of the current reserves.

Commercial operations in the U.S. aren’t nearly as developed as those in China and Japan, of course, but keep in mind that these are just the early stages of what could be a whole new market segment.

For now, I’ll remain cautiously optimistic, but it wouldn’t surprise me to see China and Japan make more breakthroughs in the coming years.