The Oil Trap You Can't Fall For

“The era of plentiful, low-cost petroleum is reaching an end.”

It's been nearly six years since those words began the now-famous Hirsch Report. And we couldn't agree more.

That year, crude prices nearly broke above $80 a barrel for the first time. After a slight correction back to $50 per barrel, the gloves came off as the oil bull charged to a record $147 per barrel over the next two years.

You know what happened next...

The price crash during the second half of 2008 and its subsequent rally back to triple digits has been splashed across the pages of Energy and Capital ever since.

Yesterday, my colleague Nick Hodge explained how the geopolitical storm in Egypt was the final catalyst for $100 oil.

Today, as the threat of a supply disruption in the Suez Canal eases, crude prices are still moving higher.

Close, but no cigar

Unfortunately, no matter how much some investors would like to pull the wool over your eyes, crude will still be king for decades to come.

As you can see below, fossil fuels will continue to drive our energy demand (taken from the latest BP Energy Outlook 2030): 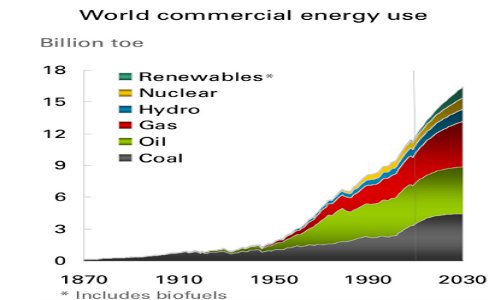 Here are a few other interesting notes from BP's report that should call your attention:

But BP's report wasn't all doom and gloom...

The overall feeling was that renewables were on the rise, their contribution to the energy mix rising from 5% to 18% by 2030. BP was also careful to point out that by 2030, non-fossil fuels combined will be larger than any single fossil fuel.

Okay, so it may not be total independence. But at least it's a start, right?

Still, it's a much rosier forecast than the IEA's, which has suggested more than half of our oil production in 2030 will come from fields that are yet to be developed or even found!

This may not come as a surprise to my regular readers, but there's one oil investment that has underwhelmed me, time and again. And yet, it's always on the top of the list for other investors.

Believe me — in the grand scale of things, they're a lot smaller than you would first think.

If you take all six of the supermajors —  BP, Chevron, ConocoPhillips, Royal Dutch Shell, Total S.A., and of course, the deceptively mighty ExxonMobil — and combine their oil and gas reserves, you would only control 6% of global reserves.

Approximately 90% of global reserves are controlled by the NOCs, or national oil companies, like Saudi Aramco.

One offender in particular is ExxonMobil. We've talked before about Exxon's first foray into the shale industry after shelling out $41 billion for XTO Energy...

These supermajors just haven't delivered the same kind of results for investors.

Take a look for yourself.

Here is a side-by-side comparison of how four supermajors have performed against four Bakken plays (click to enlarge the image):

As you can see, Exxon has barely broke even.

Underwhelmed is exactly how I'd feel.

It's not all about the drillers... And that's one reason my latest shale pick has the potential to revolutionize the entire shale production technology — and has raked in a small fortune for my readers.

There's still an opportunity for investors to get in early here.

And if you're looking for a different type of play than your typical driller, remember what it'll take for North Dakota to develop its oil industry. Remember, that infrastructure needs to be built as soon as possible.

The entire state only has enough capacity to ship roughly 125,000 barrels per day out of the Williston Basin. According to data from the EIA, North Dakota produced a record 342,000 barrels of crude in September.

Right now, there are 165 total rigs operating in the state. State officials fully expect production to reach 500,000 barrels per day over the next few years.

If that doesn't emphasize the need to increase their shipping capacity, I don't know what would.

And as you might expect, these pipeline stocks have performed admirably for investors over the long haul: 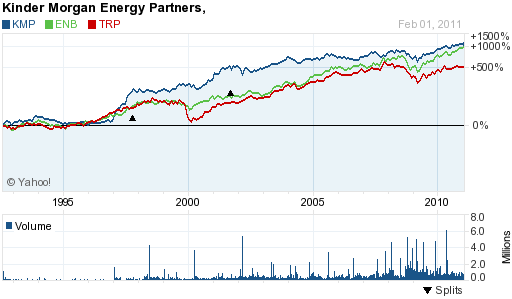 Some of those companies are even exploring other avenues.

Kinder Morgan (NYSE: KMP), for example, recently announced it would invest up to $150 million this year in Watco Companies Inc. — one of the country's largest short-line railroad companies.

P.S. If there's one thing I've learned from my cubicle cellmate, Nick Hodge, it's that renewable energy can be just as profitable for investors as the world continues down the backside of the Peak Oil curve. Nick's latest play involves a secret bit of technology involving using solar power at night. Learn about the development that's changing the energy game — before it becomes front-page news.