The Legalization of Marijuana is Coming Thanks to the Supreme Court

It was a huge pain in the ass just to make a few bucks.

But it was the only way I could do it without taking part in a federal crime.

I remember the date well.

It was around 10:00 a.m. when I transferred some digital currency to a sports betting site in the Caribbean in an effort to place a bet on the Mayweather/McGregor fight.

I did make a few bucks, but the hassle wasn’t worth it. Nor was the risk. After all, it would’ve been incredibly easy for the folks running this site to disappear overnight — along with my winnings.

I’m not a big gambler, but from time to time, I do like to wager on a good fight. And thanks to a Supreme Court decision this week, I will soon be able to do this in my own state, in a fully legal environment.

On Monday, the Supreme Court struck down the 1992 Professional and Amateur Sports Protection Act, which essentially outlawed state-authorized sports gambling.

This is a huge victory for freedom-loving people all across the country. Not to mention the companies that are now set to rake in billions from legal gambling operations that could actually be up and running in 32 different states within five years.

But that’s not why I’m telling you about this Supreme Court decision today.

You see, the decision to strike down this 1992 law was based on the 10th Amendment of the Constitution, which states that powers not delegated to the United States by the Constitution are reserved to the states respectively.

According to Justice Samuel Alito, the Court ruled that the 1992 act “commandeered” power from the states, essentially forcing them to act in ways they otherwise would not, and that the Constitution did not grant the federal government this level of power.

Basically, because the Constitution doesn’t say anything about sports gambling, the law doesn’t align with constitutionally stated principles.

And you know what else doesn’t?

When it comes to the legal system, precedent is everything.

And just like sports betting, there’s nothing in the Constitution that says anything about cannabis.

Interestingly, cannabis stocks have rallied this week as a result of this decision.

It’s quite clear that the market knows what this recent Supreme Court decision means for the cannabis industry. Certainly we do.

In fact, we’ve been monitoring the progress of this Supreme Court case for a long time now.

Although I must be honest: I didn’t discover this case by sifting through court documents and speaking with high-caliber D.C. lawyers.

I actually made this discovery through — of all things — an algorithm.

The algorithm is called the S-50 Trigger, and it works similarly to Google’s artificial intelligence (AI) program, which can accurately predict chess moves to win every game.

Only instead of chess moves, the S-50 Trigger analyzes social, economic, and political patterns that will directly affect a select group of stocks.

In the case of this recent Supreme Court decision, the S-50 Trigger identified one particular cannabis stock that was mostly likely to get the biggest boost from this decision. The stock is MariMed Advisors (OTCBB: MRMD), and here’s how it performed right after the Supreme Court’s decision was announced: 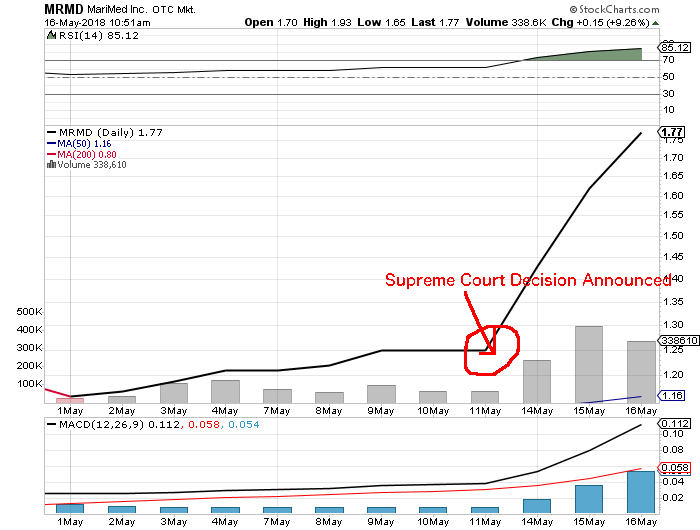 The S-50 Trigger alerted me to this stock last December, based on a number of variables that the algorithm identified as “buy signals.”

Based on those signals, I recommended MariMed to my Green Chip Stocks investment community on December 28, 2017. We paid $0.67 a share. 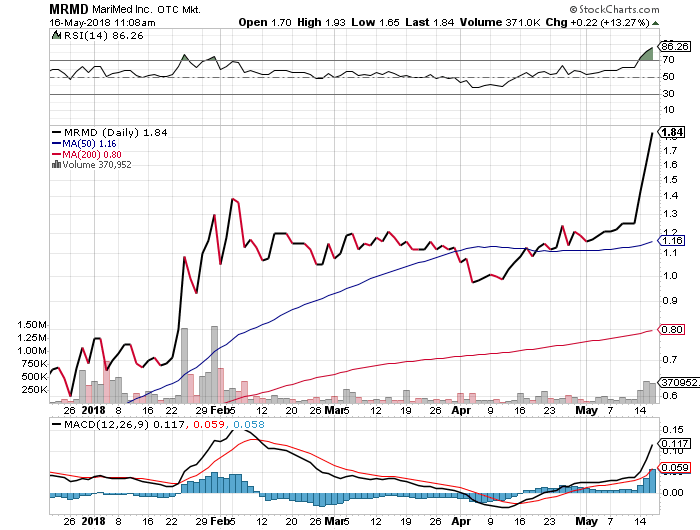 And there’s still plenty of steam left in this one, too.

Because you see, the S-50 Trigger has also alerted us to a new event that’s going to push MariMed even higher. That date is May 22nd. And in addition to MariMed, there are two other stocks that are also set to soar on that date.

You can read more about that event and the other two stocks that are in line for huge gains on May 22nd in this recent S-50 Trigger alert.

And if you want to learn more about how the S-50 Trigger works and, of course, how you can get access to it right now, click here.

Make no mistake; we’ve been making an absolute fortune thanks to the accuracy of the S-50 Trigger. And we’re about to do it again on May 22nd. So if you want to get in on this action, too, I strongly recommended getting access to the S-50 Trigger now, because May 22nd is only five days away.