From Fear to Fundamentals and Back Again

In 1949, the American mythologist Joseph Campbell published The Hero with a Thousand Faces. In this landmark work on comparative mythology, Campbell introduced the concept of what he called the “Hero's Journey.”

The Hero's Journey is a common template found in many of the myths and legends from around the world. It's found in the Greek and Roman myths, the Arthurian romances, stories of great religious figures, and even modern-day superhero characters, just to name a few.

The template generally involves a hero going on an adventure, which takes him on a long, guided journey of trials to overcome some impossible ordeal and to later return home changed or transformed. Ultimately, the Hero's Journey ends where it began.

And although Campbell's work is a study of fiction, we can find some similarity between the template of the Hero's Journey and the real-life rounding path many gold investors following during their career. Here's what I mean...

Almost everyone becomes a gold investor the same way: looking to hedge against or profit from some sort of crisis. And that's simply because gold has long been perceived as crisis insurance.

There are countless examples (historic and modern) of surging gold investment during economic, social, and political instability. I personally became interested in gold following the fallout of the 1997 Asian financial crisis. I was in college at the time. Then, following 9/11, I began to become a serious gold investor.

Younger gold investors I've met tell me the 2008 financial crisis generally sparked their interest in gold. Meanwhile, I know guys who have been dealing in gold since the Nixon Shock. They're generations apart, but they all initially got into gold for the same reason: to hedge against or profit from some sort of crisis.

After a new gold investor settles in, they'll typically begin to learn more about the fundamentals of gold. They'll learn gold has natural properties that give it intrinsic value as money. They'll learn the part gold played as a monetary asset throughout history, as well as the metal's role in today's market. They'll show you charts of increasing money supply figures and rising national debt levels. They'll curse the Fed and quote Milton Friedman.

If these investors continue to buy gold, their rationale for investing shifts from simply looking to hedge against or profit from crisis to include investing for fundamental reasons.

After learning and arguing for all gold's fundamentals, an investor will eventually reach the final revelation: the gold market reacts on emotion, not logic.

All investment markets mainly react to emotion. But for the gold market, emotional reaction is a particularly strong force. And at the end of the day, the fear of crisis is simply a stronger catalyst for gold prices than any fundamentals. 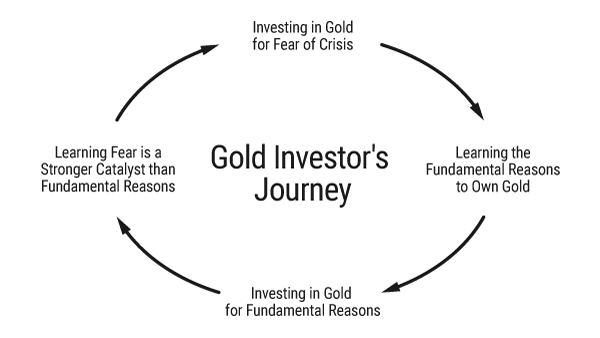 There's only one conclusion here: avoid being in the cycle yourself. There are very strong fundamental reasons to invest in gold. But fear is ultimately going to be the catalyst that drives gold prices.

Own gold because others will be fearful in the event of crisis, not because you are fearful of crisis.