The Future of Natural Gas

We've all heard of Colonel Edwin Drake before.

Though he wasn't actually a ranked officer in the military — he had previously been a railroad conductor and decided to use the title for added prestige and to garner respect — Drake was credited for drilling the first oil well.

Shacked up in the small community of Titusville located in the northwest corner of Pennsylvania, Drake hit oil at a depth of 69 feet.

The rest, as they say, is history.

But you may not know about this other "first"...

Nearly four decades before Drake began posing as a colonel, another man was hard at work drilling his own fortune. And what he was drilling for is shaping the world's future energy stage as we speak.

Using only shovels, his well was 27 feet deep.

If we really want to know how far we've come from a technology standpoint, just consider that the pipeline used to ship the produced gas was made from hollowed-out logs slapped together with tar and cloth.

Today, there are more than 2.2. million miles of steel pipelines underneath U.S. soil shipping natural gas to more than 68 million people.

Sadly, natural gas is still lumped with its ugly step-sisters coal and oil, despite being a cleaner source of energy than both. Unlike oil, however, its future is bright...

Natural gas is going to play a critical role in our energy mix. We can guarantee that much right now.

You see, the United States is undergoing a change.

Looking at data from the EIA, approximately half of U.S. total electric capacity comes from plants that are more than three decades old.

Let's focus for a moment on the two main fuel types: coal and natural gas. Most of the natural gas-powered plants have been built within the last ten years, while more than three-quarters of all the coal-fired plants were constructed during the 1960s and 1970s...

What we're witnessing today is nothing short of a natural gas revolution.

The EIA is projecting natural gas demand will overtake coal demand within the next 25 years. And you can bet the rest of the world is paying close attention to this trend...

Last week, we saw just how desperate Japan is to avoid a catastrophic energy crisis. The Japanese are in an all-out melee with China over liquefied natural gas (LNG) supplies.

But China is just as hungry for new energy sources.

The country's LNG imports reached a new record in July at more than 1.18 million metric tons. Gas demand jumped 25% over July 2010. By 2035, China is projected to double its natural gas demand, growing around 5% per year — the highest rate of growth across the world.

And that kind of growth isn't restricted to China...

India is also expected to double its gas consumption by 2035, and gas will reportedly make up roughly 12% of the Subcontinent's energy mix.

Believe me, dear reader, you don't want to ignore this trend. There's simply too much at stake.

A few months back, a colleague and I ruminated over the profitability of natural gas investments.

With stagnant natural gas prices under $4 per Mcf plaguing the United States, the prospect of these North American natural gas companies has been vilified in the markets.

Personally, I can't think of a better time than right now.

(It's a point I've been driving home in these pages and to readers of the $20 Trillion Report for some time now.)

We know how crucial natural gas will be going forward — not only for the United States, but for the rest of the world as well.

And if you don't believe there are substantial profits over the long haul, check out what some of them would have delivered for you... 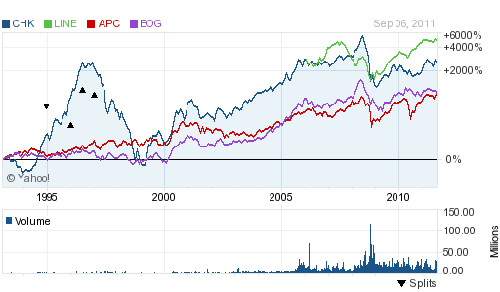