The First Stock I’m Buying Before Gas Hits $8 a Gallon… and It’s NOT Oil!

After all, we just saw WTI crude climb more than 3% to over $123 per barrel yesterday after President Biden formally announced a U.S. ban on importing Russian fuel.

From here on out, we’ll no longer be buying any crude oil, petroleum products, LNG, or coal from Russia.

As the president put it, “Russian oil will no longer be accepted at U.S. ports.”

Not only was the move wildly popular among Americans and both sides of the aisle in Congress, but it was also the right move to make.

What they might not tell you is that Putin must’ve been laughing during the announcement.

How much are we really talking here? Last year, the U.S. imported roughly 672,000 barrels per day in petroleum products, including 199,000 barrels of crude oil per day.

But again, it was an easy move for President Biden. Unfortunately, the EU isn’t exactly in the same position, which is why Biden noted in his speech that Europe wouldn’t be joining the effort.

Banning Russian energy exports to the U.S. may seem like a toothless move, but consider for a moment the consequences of Europe pulling the same strategy.

Like I mentioned to you a few weeks ago, Putin has Europe right where he wants it.

So let’s revisit the question… Is it time to buy oil?

With $130/bbl oil already a reality (WTI crude hit that mark a few days ago), it now feels like $150/bbl oil is an inevitability.

So yes, there’s still a huge upside for oil stocks — and keep in mind that this bullish market would continue even with a de-escalation of Russian aggression. Let’s not forget that U.S. consumption is at record highs right now.

Now, the real answer to this question is that you should’ve been buying oil ever since the COVID-19 lockdowns crashed crude prices into negative territory.

Over the last two years, I’ve tried to explain that yes, you should buy oil. Had you picked up two large oil players — Pioneer Natural Resources and Occidental Petroleum — you’d be sitting on profits of 177% and 164%, respectively.

But let’s say you held back throughout the pandemic.

Let’s assume you finally found your confidence in oil and didn’t pull the trigger on those stocks until last December. 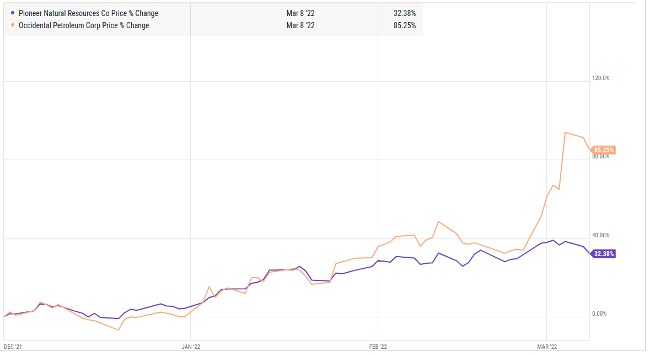 You would have nearly doubled your money on Occidental in just three months.

That’s not too shabby for being late to the party.

But it’s a different game now, isn’t it?

The good news is that you haven’t missed the boat entirely, and there will still be plenty of opportunities for individual investors like us.

But the great news is that the best energy profits out there now may wildly outpace the oil sector.

My Must-Own Stock When Gas Hits $8 a Gallon

What most of the investment herd doesn’t realize is that the higher oil goes, the harder it will be to pick that fruit.

Moreover, the prospect of $150/bbl oil also comes with a greater threat to your oil profits: demand destruction.

So far, some projections for gasoline prices this summer have reached as high as $7–$8 per gallon.

You don’t need me to tell you that people will be driving less should we hit that extraordinary price.

Some of my veteran readers probably remember the pain at the pump that came when crude prices surged to $147/bbl back in the summer of 2008.

But there was one huge difference between now and then…

The EV revolution has been underway for nearly half a decade at this point, which gives consumers options.

I told you in January that lithium would become the oil of the 21st century.

That’s truer than ever as crude prices inch closer to $150/bbl.

However, there’s one serious drawback to this situation.

You see, crude prices over $100/bbl will accelerate EV sales, which will cause an explosion in lithium demand. Remember, lithium prices surged 280% in 2021 alone!

The problem is that the world’s lithium supply is controlled by a monopoly of just a handful of massive companies.

At least, it was until now.

I want to show you a small, little-known company with a technology so disruptive that it’s able to provide us with battery-grade lithium and completely sidestep those massive lithium corporations.

Of course, the best part is that ALL of this battery-grade lithium is located right here in the U.S.

I strongly recommend you take just a few moments out of your day to check out the full details on this one for yourself.

P.S. If you’re like me, you’re looking to grab a hold of any advantage you can when it comes to trading stocks... and sometimes you find a trader with a track record so immaculate that you want to immediately jump on board.

That’s how I felt after my colleague Sean McCloskey started churning out winners like the AMD calls he made recently, pocketing more than 207% for his readers.

But this isn’t something you should just take my word for. I want you to get the details on how Sean does it straight from him.

Luckily, he’s about to lay it all out to a group of elite investors tomorrow. As a premium member of Energy and Capital, you have the chance to get a front-row seat, absolutely free.

All you have to do is sign up now and let Sean do the rest.