I must have told this story a thousand times by now...

But I thought that I would finally write about it...

Back in 2010, I went to Albania to visit an old copper mine with a few mining guys from Canada.

It's not the first place that pops into anyone's head when they think of exciting international travel.

But I definitely got excitement – more than I wanted.

On the third day of the trip, the group went with two local geologists to the Gjegjan copper mine, which is located near a town in Northern Albania called Kukes – and about a four hour drive from the capital Tirana, where we were all staying. 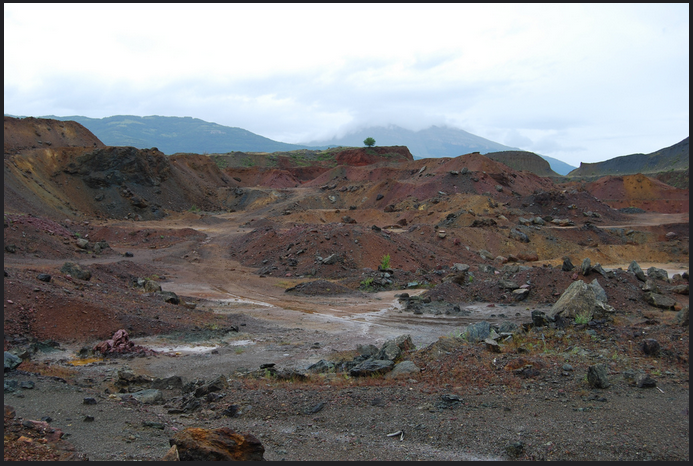 The Gjegjan copper mine is nothing more than just a hole in the ground today. However it produced over 320 million pounds of copper between 1961 to 1993.

After kicking around a few rocks there, we went off to take a look at another potentially mineral-bearing property – and it was there were I met this dog.

The last place we had planned to visit that day was at the bottom of a steep hill. In fact, here was the last photo I took before the whole incident went down... 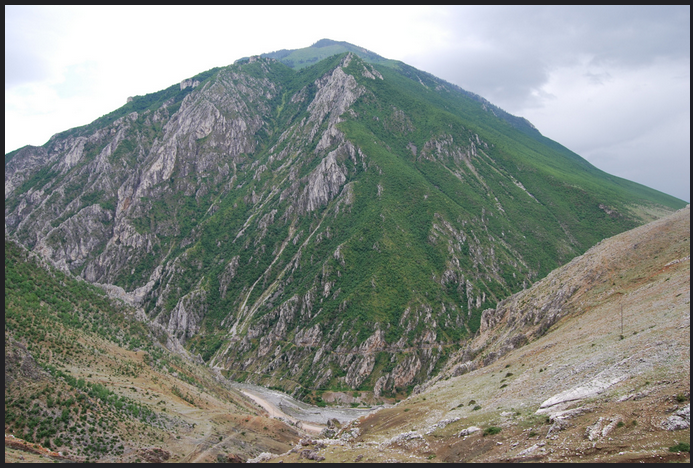 We essentially had to walk down by the river in the photo above.

So, we make it down without incident.

And after we were through, we start walking switchback up this hill.

At the top of the hill was this dirty, mangy, ugly farm dog barking at us, which was about the size of a black lab – maybe about 65 or 75 pounds. (And I promise the dog doesn't get bigger every time I tell the story.)

I was the second guy in the line with only one person in front of me – this guy John.

As we get closer to the top of the hill, the dog starts barking at us more.

And we have to walk right by it to get to our trucks.

John walks about 10 feet in front of this dog – and he sort of lunges at him to bite – although I don't think John noticed because he wasn't looking at it.

But the dog didn't get him.

And I'm still walking toward it.

And the hill is so steep, there's basically no other direction to go at this point.

At this point, I'm like 20 feet away from this dog thinking, 'If I show any fear, this dog is going to bite me'.

So the only thing I could do was keep heading up the hill and hope this filthy mutt doesn't bite me.

This stinking beast lunges at me, grabs the middle of my left calf, and rips it open.

A dog bite is not what you might think...

The bite felt more like a clamp closing down on my leg than anything.

But I'm scared shitless at this point.

Then, I turn and see a guy – who I'm assuming owned the dog – running toward us with a long stick (like a broom handle or a rake handle) yelling.

And fortunately, the dog immediately ran off after seeing him coming.

But my leg is ripped open.

And we're in the middle of no where with no real hospital for miles.

So we have to drive the four hours back to Tirana to get to a proper hospital with my leg bleeding all over the place.

Albania is a very poor country, so my expectations were not very high.

It was called the American Hospital.

In fact, here it is: www.spitaliamerikan.com

What worried me was the fact that hospital was seemingly trying to legitimize itself by using the word "American"...similar to the way Federal Express or the Federal Reserve use the word "Federal" to make it seem like they are directly operated by the U.S. Federal Government, which neither is.

Fortunately, they were able to patch me up without any problems, but since a dog bite is not a clean cut, it couldn't be stitched. So I had to spend the rest of the trip hobbling around Tirana, with no crutches – just a bandage wrapped around my leg.

So if you're ever in northern Albania, near a very small town called Kukes, watch out for dogs.

The epilogue to the story is, I should have came back to the U.S. as soon as I could. But one of the guys on the trip invited me to come with him to Split, Croatia for a week.

Of course I did!

Mauled leg and everything.

But that trip was a whole other adventure with a story for another time.

I still have a large, deep scar from that Albanian dog that will be on my leg for the rest of my life. I don't have any tattoos. But that scar is way cooler than any tattoo I've ever considered getting. And even though I was quite scared at the time, I wouldn't trade it for anything.