The #1 Reason You Lose Money Investing

Here's the #1 reason most investors don't make as much money as they should trading stocks...

They're afraid to hit the sell button.

And this affects investors on all levels.

Sometimes investors can feel resistance to selling when they see gains in their portfolios.

It's been called “greed” by some.

But (if I can put on my psychologist cap for a moment) I don't believe that greed is all of the motivation behind the resistance to sell with a profit. I actually believe that fear plays an important role, too.

Specifically, I mean that I believe investors experience a “fear of missing out.”

The Fear of Missing Out — or FOMO — is essentially a fear of future regret. Usually, FOMO is used to describe a person's angst that others are having some kind of fun or rewarding social experience that they aren't.

Your teenage kids have said this to you... and you probably said this as a teenager yourself...

“But mom/dad, everyone is going!”

Marketing communications firm J. Walter Thompson Worldwide says, “Fear Of Missing Out (FOMO) is the uneasy and sometimes all-consuming feeling that you’re missing out—that your peers are doing, in the know about or in possession of more or something better than you.”

But the idea can be applied to investing as well. Investors can feel a Fear of Missing Out on could-be profits. How do I know?

Because I deal with it myself sometimes.

But FOMO is a demon that investors need to battle — especially when considering short-term gains.

Here's a personal story to explain why I say that...

Back in February, my younger brother told me one of his biotech stocks was up $1,700 in his portfolio after only a week of owning it. Great! But he didn't want to sell it because he thought it was headed higher — until I explained it like this...

Holding onto a $1,700 weekly gain in paper is like not cashing a weekly check on an additional $88,000 annual income.

Plus, that money can be contributed to your next investment.

I'm not sure if that biotech stock did, in fact, go any higher. But I don't think it did — otherwise I probably would have never heard the end of it.

I've must have put it like this to investors a million times by now...

We don't want to marry stocks. We only want to date them for a while.

Nevertheless, I'm just like you: I'm not made of stone. I fall in love with them sometimes, too, and it's hard to break up. But trust me, they'll be happier in the end, and so will you.

Let's take a look at the returns of all of the gold and silver stocks I've mentioned to you here in Energy and Capital. 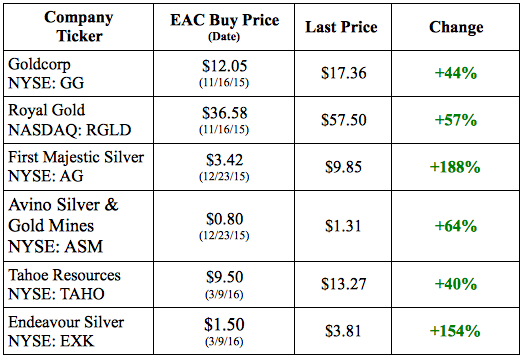 I mean, that's all there is to it: sell.

Take the money. Let gold and silver prices cool off a little, and then we'll buy back in.

I think a good re-entry point will be next week on Tuesday the 26th prior to the Federal Reserve's FOMC meeting. I'm hoping to re-enter gold at about $1,240 an ounce and silver at around $16.25 an ounce then.

I'll get back to you on Monday with another trade.

The War on Gold
Energy and Capital editor Luke Burgess examines the world governments' and central banks' war on gold.
The Secret Profits Behind Water Filtration
Energy and Capital editor Keith Kohl dives into a $4.8 trillion crisis that most investors have never heard of before today.
The Albanian Dog
Energy and Capital editor Luke Burgess tells a story about getting bitten by a large dog while on a work trip to Albania.
Big Bank Admits to Manipulating Gold/Silver Prices
The conspiracy theorists may have been right. Deutsche Bank just agreed to settle two lawsuits that alleged the German bank illegally conspired to manipulate gold and silver prices at the expense of investors.
Hydrogen Fuel Cells: The Downfall of Tesla?
Lithium has been the front-runner in the battery technology market for years, but that is all coming to an end. Elon Musk is against them, but Jeff Bezos is investing heavily in them. Hydrogen Fuel Cells will turn the battery market upside down and we've discovered the tiny company that is going to make it happen.