Apple just shot itself in the foot.

It looks like Project Titan, Apple's strongly rumored attempt at an autonomous car, is bust.

The company recently announced that it would be killing the unofficial project off in lieu of making its own autonomous software to sell to other companies.

This may not have been the best move.

Practically every major carmaker on the market today is working on an autonomous car, each developing its own software to go with the hardware.

Apple will have to make something that is, beyond a shadow of a doubt, better than those individual programs, which will be hard to do without a physical car to test it all on.

None of this autonomous-electric stuff would have happened half as quickly without Tesla's innovations and how fast they hit the market.

I mean comparatively, of course. Musk is notorious for promising newly upgraded tech only to deliver months or even years later than planned.

But is that really all that bad?

Think about it this way: would you rather invest in a company that promises and meets all of a lackluster goal, or one that promises more than you'd even hoped for and meets most of that goal? 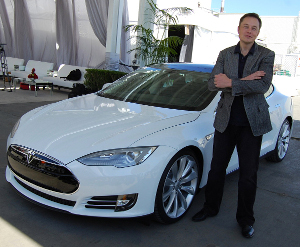 For all of Tesla's poor scheduling, its deliveries have often proven worth the wait.

Up until the downgrade, Tesla's Model S was Consumer Reports' top-rated car, and it still stands as an impressive show of the growing EV market.

Yet even the downgrade came up as a question of reliability, which is hard to measure when the cars you're testing have existed for less than a decade!

Of course, what we really want to see is the company making growing profits. Remember, Tesla Motors has had only a handful of cash-flow positive quarters in its lifetime, although it hasn’t exactly been around for very long.

Now, you may wonder how a company that as of yet has sold nothing but luxury cars for more than $70,000 could lose it all.

With all due respect, it's all Musk's fault.

You see, his modus operandi for most of his career has been the same three-step process:

He built a computer game as soon as he learned to code, sold it and used that money to build PayPal, then sold that and used the money to help save Tesla the first time around.

Since then, all of the company's money has been going right back into R&D. Musk's goal all along has been to move fast, think big, and transition as quickly as possible from building luxury cars to commercial cars.

To be fair, Musk has gone a little too far sometimes...

Did we really need the Model S P100D before we got a real Model 3 production line up and going? No.

But Musk wants to push the envelope. His self-stated philosophy is that of over-promising from the start. That way, even if only a portion of the grand scheme actually gets accomplished, it's still a big deal.

And clearly Tesla Motors has thrived on that kind of action. The company spends nothing on advertising, expecting that its wild claims will be enough to get its name out to the public.

If 400,000 pre-orders for a car no one had seen or driven yet isn't enough proof that it's worked, I'm not sure what is!

At first glance, it may seem like Apple and Tesla have a lot in common, but what Tesla lacks in profitability, it more than makes up for with game-changing designs.

Apple was once known for doing the same thing, but it has recently fallen from grace for... a few reasons.

Fact is, Tesla has much more room for innovation. After all, the EV market has never had this much media attention before, so the sky truly is the limit. There’s only so much more that can be done to make a smartphone much better.

But I think somewhere behind Musk’s grand plans to colonize Mars, he knows his spending limit on “bigger and better,” and where he should start focusing on the commercial aspects rather than the luxury ones.

That will be the final test for Tesla.

What people are starting to wake up to now is that Tesla isn't a startup anymore. With the first Model 3s due out next year, it’s only natural that shareholders are ready for the fireworks to begin.

I don't doubt that it will get there or go bankrupt in the process. Either way, the wheels have already been set in motion.