How They're Taking a Piece OPEC's Trillion Dollar Profits

As if we didn't have enough anger towards OPEC, the trillion dollars they'll make this year from oil exports takes our ire to a whole new level.

Did we honestly expect OPEC to raise production?

With price hawks like Iran and Venezuela struggling to maintain output, it's not a hard case to make for them.

After all, oil is money – and in this case, a lot of money.

According to the EIA, oil export revenues for OPEC members could reach a trillion dollars this year, rising to $1.17 trillion in 2012.

Perhaps their trillion-dollar racket shouldn't come as too much of a shock. After all, we've watched oil prices rise more than 200% within the last two and a half years: 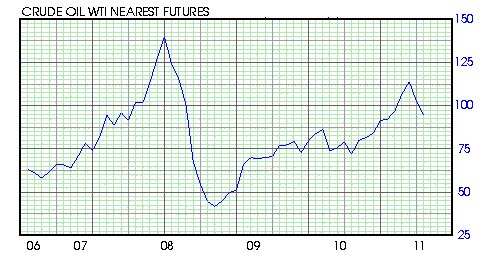 Besides, if a member really wanted to increase output, there's certainly nothing stopping them. Cheating on their quotas has become so commonplace; was it really necessary for the Saudis' dramatic announcement that they would raise output regardless?

The Saudi production increase, like everything else dealing with OPEC, comes with a catch...

Even though Libya's production has fallen from 1.7 million bbls/d to a mere 200,000 bbls/d, the Saudis capacity that will help make up the difference isn't exactly the same.

Libya's production is light, sweet crude with an American Petroleum Institute (API) gravity of about 380. The API gravity tells us how heavy or light the oil is compared to water.

Typically, having an API gravity greater than 10 means the petroleum is lighter and floats on water. Light crude oil has an API gravity higher than 31.10.

The problem is the Saudis' additional production is heavier, meaning most of the European and Asian refineries cannot process it.

And it doesn't get much better for future Saudi production, either.

Over the next decade, however, OPEC will be losing a good chunk of our change, especially now that we're lowering our dependence on Middle East oil. We currently import approximately 4.5 million barrels every day, or about 40% of our total oil imports, from the cartel.

Unfortunately, there are very few places we can look to replace that Middle East oil – with only one, in particular, holding any great promise.

That country is sitting on 174 billion barrels of crude.

According to the IEA's Medium-Term Oil and Gas Markets report, Canadian production is projected to reach 4.7 million barrels per day within the next five years.

And it's not surprising where the report is expecting to see that increase: North America is now seen as the strongest-growing non-OPEC region... upward revisions to U.S. onshore crude from tight oil formations.

This is on top of higher expectations from Canadian natural gas liquids (NGLs) and oil sands production.

Now let's add some more perspective on this future growth.

North Dakota is one of the few places in the United States that can increase production. In March 2011, the state broke its own oil production record, pumping out 359,589 barrels per day. State officials are now expecting production to double to more than 700,000 bbls/d during the next decade.

If that forecast becomes reality, North Dakota will then become our second-largest oil producing state.

Not too shabby, right?

In Alberta, just one oil sands producer is expecting to increase its production as much as 500,000 bbls/d over the next decade.. The way production is falling in California and Alaska – currently our second and third largest oil-producing states – would mean this one company alone might be ranked third on the list.

Interestingly, these in-situ Canadian companies are exactly where we will see the largest growth in oil sands production. 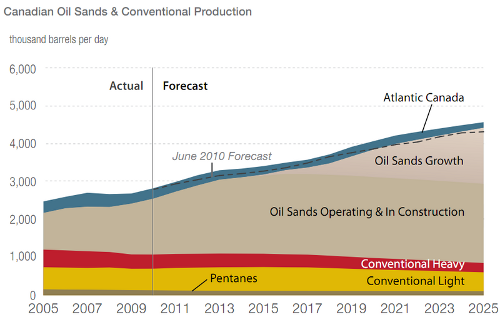 In other words, oil sands production will make up nearly 80% of all Canadian oil production.

A recent oil sands report by the Royal Society of Canada sheds even more light on the matter, too. Although production from surface mining operations is expected to double between 2008-2018, in-situ production will likely increase threefold and make up approximately one-half of total bitumen production.

Going forward, that gap will continue to widen.

P.S. We know how hard a down market can feel sometimes, and the latest correction has left a sour taste in investors' mouths. However, we still have a tremendous opportunity in a volatile market – trading options. In fact, most investors stay away from options trading due to one reason – they don't understand how to do it. My colleague, Ian Cooper, has made options trading simple, breaking down the ins and outs for his readers. See for yourself how easy it is once you get started.

OPEC Greed Fuels Oil Profits
Energy and Capital editor Keith Kohl explains why OPEC's manipulation of oil prices will keep fueling investors' profits.
Montana Oil Profits
Today, Editor Keith Kohl looks at the next wave of Bakken profits and why Montana's time in the spotlight is within sight.
But We Don't Have Another 9.48 Million Barrels...
U.S. crude stockpiles are down; demand already outstrips supply, and the IEA says a tidal wave of emerging market refineries is coming online and will demand to be fed... Where will the world get its oil? Chris DeHaemer tells readers the two places that will supply the globe with crude in the years to come, and how you can profit.
Weekend: Is an Oil Supply Crunch Ahead?
Why are the latest IEA warnings over high oil prices falling on deaf ears? Keith Kohl explains as he brings readers the week's top investment ideas.
Hydrogen Fuel Cells: The Downfall of Tesla?
Lithium has been the front-runner in the battery technology market for years, but that is all coming to an end. Elon Musk is against them, but Jeff Bezos is investing heavily in them. Hydrogen Fuel Cells will turn the battery market upside down and we've discovered the tiny company that is going to make it happen.