The doom-and-gloom has arrived, dear readers.

Judging from the headlines flooding the media over the past few weeks, I’m frankly surprised that WTI prices have only jumped 10 bucks over the last two weeks.

As my colleague Luke Burgess pointed out on Monday, the latest move by OPEC+ to extend cuts another nine months has given the bulls some breathing room. With Russia officially on board with sticking to the deal, it seems the Saudis have finally found the partner they’ve been looking for.

Too bad the rest of OPEC is going to suffer for it.

But let’s be honest here — the doom-and-gloom crowd is heated for one reason: Iran.

The most recent news out of Tehran that the country will break the limit set on its stockpile of low-enriched uranium is just more fuel for the war hawks.

This shouldn’t be too shocking, should it?

The drums of war have been beating for weeks, with each new event escalating tensions in what is unquestionably the most important oil region on the planet: the Strait of Hormuz. 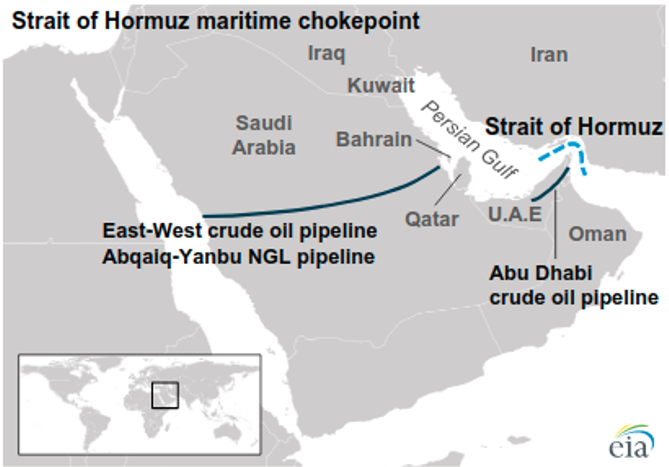 We’re talking about 21 million barrels of oil that travels through it every single day — that’s roughly 21% of global consumption.

Threats to the Strait affect more then simply Iran and the Saudis.

All the major OPEC players would be affected, including Iraq, Kuwait, UAE, and Qatar, which is one of the world’s largest LNG exporters.

So not only is there pressure on the supply side from the extension of production cuts, but we also have to consider the geopolitical crisis fomenting between Iran and the United States.

The demand side of the equation is just as bullish.

Throw aside any fears of lower demand in the United States.

According to the EIA, petroleum demand increased last year, averaging 20.5 million barrels of oil equivalent per day, and remains the dominant source of energy consumption in the country.

When you see headlines that say demand is bullish, refer them to the chart below from the EIA, which shows that U.S. gasoline consumption is near all-time highs just under 10 million barrels per day.

Ah, but we’re just one side of the world's demand equation, aren’t we?

Across the Pacific, China’s consumption of petroleum products was up 8% year over year in May, while its gasoline demand jumped 13% during the same period.

Unfortunately for China, its oil production isn’t booming like in the U.S.'s Lower 48. More importantly, the $77 billion that China is throwing toward boosting crude production this year won’t be nearly enough.

As it stands now, the Middle Kingdom is only extracting oil at a rate of under 4 million barrels per day.

But China is expected to account for nearly half of all of Asia’s crude oil refining capacity within the next four years.

No matter how you look at it, China is going to be desperate for a safe, reliable source of crude.

That’s where the Strait of Hormuz comes into play...

How Investors Can Stay Ahead of the Herd

Both Iraq and Saudi Arabia accounted for more than 20% of China’s oil imports in 2018.

Taking the recent sanctions into account (assuming President Trump doesn’t balk on them via waivers like he did last fall), the Saudis are taking full advantage of the situation by playing an even more important role in China’s thirst for oil.

One wrong move in the Strait of Hormuz, and the game is over for both sides.

Perhaps the most overlooked oil producer on Earth right now is Canada.

Now, we’ve talked about the huge role that Canada is playing in replacing Venezuela’s supply of heavy crude in refineries on the Gulf Coast.

I know one of the worst-kept secrets in the U.S. energy sector is how much we rely on Canada for crude oil.

Go ahead and ask yourself how much Canadian oil we buy on a daily basis.

Take that number, and most people can double it.

Right now, we import almost 4 million barrels of crude oil a day from our neighbors to the north — three times more oil than we get from ALL of OPEC!

In fact, our crude imports from Canada have continued to rise during one of the biggest oil booms in U.S. history. Although the U.S. is now extracting over 12 million barrels per day, we still have a thirst for Canadian crude.

Between December 2018 and last April, the price for a barrel of Western Canadian Select — a blended mix of mostly bitumen from northern Alberta and other lighter oil grades — has soared over 350%!

And lately, Canadian oil sands producers have had a reason to become even more bullish...

A few weeks ago, Canada green-lighted the Trans Mountain Expansion Project. If completed, this project would triple the amount of oil transported from the oil sands area to the Pacific Coast.

In total, nearly 900,000 barrels per day could be exported straight to Asian markets.

For China, Canada would provide a much more stable source of crude compared to the potential dumpster fire that is the Middle East.

Next week I’ll show you the clear-cut winner in Canada’s oil sector, and we’ll take a look at why one company has positioned itself in just the right spots.