I don't know what it's like where you live, but here in the outer suburbs of Maryland, solar panels are going up like aluminum siding in the 1950s. Not only is it trendy, but it's also ugly, and it seems to make fiscal sense.

Well, the numbers were a lot better before heating oil became so cheap. But that's another lesson for another day.

What you may not know is that black mirrors on McMansions are only half the story. Solar demand in markets like India, China, and Southeast Asia will drive more than 50% of demand. 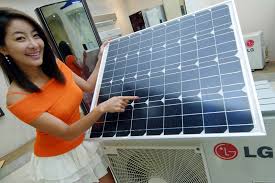 According to Photovoltaic magazine:

Distributed-generation solar will account for 65% of the world’s installed distributed energy capacity within the next decade, creating a market worth $42 billion, according to Frost & Sullivan.

“China and India are important market players, as their rapid pace of industrialization and widening demand-supply gap is creating a vast market for distributed energy.”

“Inadequate power infrastructure for the growing electrification needs in Indonesia, Vietnam and the Philippines is attracting investments in efficient and flexible distributed power solutions.”

Many people think silver is a poor man's gold. It is much more than that. It has the highest electrical and thermal conductivity of all metals and is the most reflective. These physical properties make it highly valued in industry — it is particularly useful in solar cells.

When the sun hits the silicon cell, it generates electrons. The silver conducts these electrons and forms a useful electric current. The silver then transports the electricity out of the cell and onto its useful life. On top of that, the conductive nature of silver enhances the reflection of the sunlight to improve the energy that's collected.

After five years of a base metal bear market, the business cycle has finally turned. Until recently, mine production has been dropping along with the price of silver, gold, oil, and every other commodity. Mines were closed, and miners went out of business.

This equates to a shortage of 130 million ounces of silver, which represents the second-largest deficit since 2008.

There is a varied source of demand. Solar panel demand grew by 23% year over year to 77.6 million ounces. Investor demand for bars and coins grew by more than 56 million ounces to 292.3 million in 2015.

But perhaps even more surprising is that China is back.

Bloomberg has a headline this morning: “Base Metals are Back in Bull Mode.”

And it is attributing this growth to China.

Mining shares climbed to the highest in 15 months as Chinese factory data added to signs of an improving economy in the top consumer of raw materials. Producers are set to benefit from increasing demand that has already pushed prices for industrial metals into a bull market.

A gauge of manufacturing held near a two-year high for a second month in China and services increased, the National Bureau of Statistics said. The London Metal Exchange Index, tracking six metals contracts, is at its highest in more than a year and moved into a bull market last week.

That's good news for us metal longs. And judging by the charts, gold-to-silver ratio, supply-demand numbers, and growth in solar... this move is just getting started.

There are many ways to play the next great silver move. SLV is the silver ETF, and it tracks the price of silver. As you can see, it had a nice run-up since the start of the year. It has since consolidated. 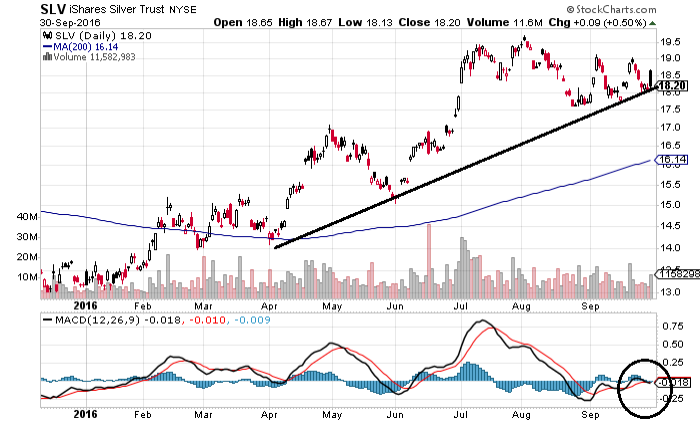 That big black candlestick last Friday shows that it is ready to move higher with power. It bounced handily off its uptrend line. The MACD has crossed over and shows it is undervalued. If the share price breaks $20, we are off to the races.

That said, if you are as confident in silver as I am, there are better ways to play it. My Crisis and Opportunity service is up over 130% in SSRI, a silver miner. Silver miners move much higher than the silver price itself because as silver prices increase, margins increase dramatically. That's the fun of buying the miners.

I've also developed a unique system named “Silver Strikes” that lets you trade silver over short intervals, making winning trades time and again. We made recent gains like 60%, 103.85%, and 83.83%. But don't take my word for it — try it, and you can make $785 on a minimal investment by this time next week.