Recently, the EIA dropped another bombshell on the shale gas boom.

We've had front-row seats to the surge in natural gas production that's taken place in the United States over the last seven years.

And finding those plays has never been much trouble. 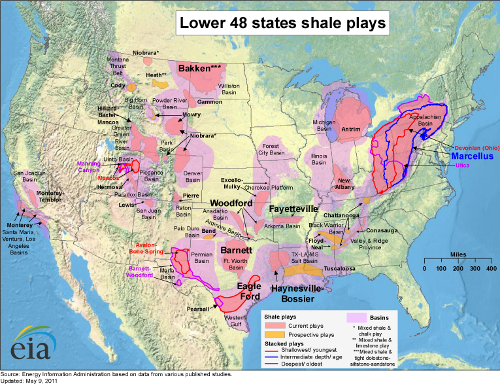 According to the EIA, almost 90% of the total technically-recoverable shale gas resources are located in just three regions: the Northeast, Gulf Coast, and Southwest.

But lately, the government has been sending mixed signals when it comes to shale gas...

At the time, it was huge jump over their previous estimate of just 84 TCF.

Then, just as Obama delivered his “all-of-the-above” plan to develop domestic energy sources, the EIA suddenly had other ideas...

A few days ago, Nick Hodge explained how the United States will become an LNG exporter as early as 2016.

And we know that companies like Cheniere are already lining up long-term contracts for gas shipments reaching as far as India and China.

Even the latest trimming of Marcellus reserves doesn't diminish the role that these shale gas resources will play for the next several decades; nor does it significantly change the big picture when we break down our natural gas production: 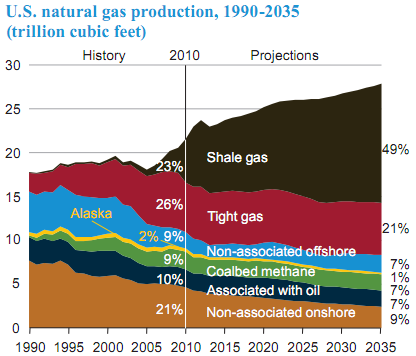 Some things aren't going to change — and that includes our growing reliance on natural gas.

As you can see above, more than half of our future natural gas production will be from shale and tight gas resources.

The Opportunity is There for the Taking

If you were looking for news to bump natural gas prices from their weakest levels since 2001, the Marcellus revision has already helped push natural gas 20% higher this week: 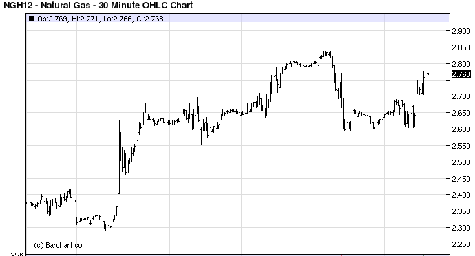 Investors will be hard-pressed not to be optimistic over natural gas in the long run.

The only question for investors now is when to jump in feet first.

You can find more profit ideas for today's market, below...

12 Shocking Facts about the Bakken: Why the American Oil Boom is Here to Stay
Today I want to tell you about the law of unintended consequences regarding the hyper-speed growth in economic output in the Bakken.

Oil Exploration Companies: The Last Time This Happened, It Jumped 162%
The easiest way to make money, in terms of time spent versus cash returned, is to research and buy oil exploration and development stocks.

Gold Investing 101: How, When, and Where to Invest
Don't miss Angel Publishing's special online seminar, hosted by a man with 34 years of gold investment experience. It's free and space is limited, so sign up now.

Proof Obama Loves Gas and Oil Shale: We Told Him, He Listened
The 2012 State of the Union address sounded unusually similar to what I've been writing in Wealth Daily and Energy and Capital: Create millions of jobs by opening up our vast gas and oil shale formations.

The Future of Nuclear: Uranium Shortages Loom
We all know oil's back over $100 as the economy starts to rebound. And natural gas prices are at decade lows because of abundant new supply. But what's up with uranium?

Natural Gas Rebound: Obama's Most Profitable Slipup Yet
Energy and Capital editor Keith Kohl discusses why Obama's slipup during the State of the Union Address will have very profitable consequences for investors.

The Only Logical Solution: Buy Gold
Please don't send me hatemail for what you are about to read in this article... What I am going to tell you is true. Your disdain for the facts won't change them; shooting the messenger won't change what's going on.

Gold and Silver are Breaking Out: It's Time to Buy Gold and Silver Again
2012 is the Year of the Dragon. According to this year's Dragon prediction, investments will do well "with a steady income throughout the year." Gold and silver will do well, too.