Seven Predictions for the New Year

It’s that time of year when we start to think about eggnog, beef Wellington, and last year's stock market predictions. I did pretty well if I say so myself, and that despite being blindsided by COVID-19. You can find my recap here.

This year we will stick out our proverbial neck once again and, at the risk of being mocked and ridiculed, give it another shot.

Keep in mind predictions have a way of going wrong.

Perhaps the most famous bad prediction of recent times was at the penultimate moment of the 2000s bull market, when Jim Cramer sauntered on TV and proclaimed, “Should I be worried about Bear Stearns? No! No!”

Don’t get me wrong, I like Cramer — he coined the term "FANG" (Facebook, Apple, Netflix, and Google) after all. This fearsome foursome has made a lot of people a lot of money over the past eight years.

But on March 11, 2008, when housing was getting wobbly and the economy was about to go over the biggest cliff since 1929, Cramer was asked by a viewer if he should be worried about Bear Stearns, the international investment bank and brokerage.

Cramer waved his arms and replied in that emphatic falsetto, “NO! NO! NO! Bear Stearns is fine. Don’t move your money from Bear, that’s just being silly.”

Exactly five days later, after failing to get a loan from the Federal Reserve to remain liquid, Bear was bought out for $2 a share — down $58 from Cramer's infamous call.

That tangent aside, here is what I think I know...

In the early 2000s, interest rates were dropping and people found that their housing had gone up substantially in value. They used this newfound easy money as a personal ATM, taking out huge amounts of cash to buy cars, boats, timeshares, and fancy new kitchens.

What you may not have realized is that 13 years after the housing crash, there is now more equity in housing than there was in 2006. 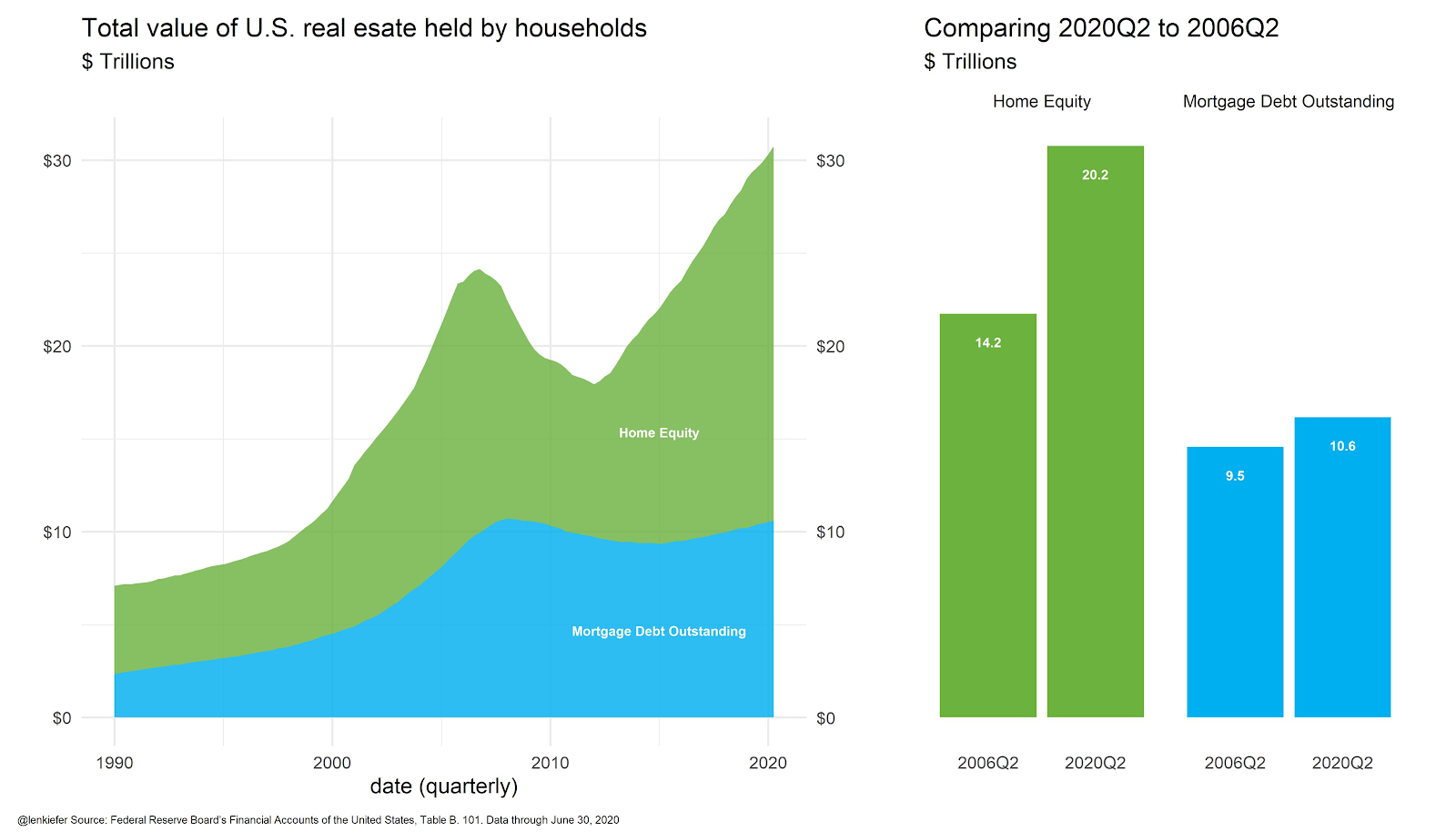 U.S. households have $20 trillion in mortgage equity. With interest rates at 2.8% (down from 4%), people will refinance and take out some money to put in a pool or buy a cabin in the woods or whatever.

This will lead to the next wave in consumer spending. Furthermore, these numbers came out before we got the surge in home prices related to people leaving the cities. Purchasing applications are up 26% over last year.

Prediction: The mortgage refinancing service industry will have a record year. Stewart Information Services Corporation (NYSE: STC) is my pick for Bull and Bust Report readers. The company makes the software you might have seen at closing. The stock has doubled since the March lows.

Like Brazil, the hydrogen fuel cell industry has always been the sector of the future. But now it is happening. Plug Power (NASDAQ: PLUG), a company that makes fuel cell electric vehicles (FCEVs), is up to $30 with a $12.70 billion market cap. I first recommended it at $2 many years ago and made more than 500% gains. Ballard Power Systems (NASDAQ: BLDP), another pioneering fuel cell company, is pushing $6 billion in market cap.

But perhaps the most important news is that Toyota has increased its commitment to fuel cells and will have a new model of its Lexus-like FCEV next year called the Mirai.

What many people don’t know is that you need platinum as a catalyst for the hydrogen fuel cell, which is why platinum is breaking out. 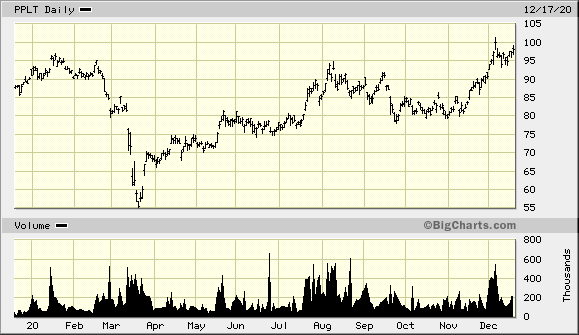 Most of these you have heard about, but you are probably new to the idea of spatial computing (SC). SC is simply the technology in which computers or robots interact in a 3D world. One segment of this technology will be managing swarms.

What is a swarm? Think of robotic cockroaches. According to IEEE Spectrum, a group of scientists at the University of Tsukuba in Japan is working toward turning 2D computing into 3D computing using robots and cockroaches.

Cockroaches make great cyborgs. First of all, they eat anything, are robust, and love to hide. You can stimulate an antenna and get it to move the opposite direction.

If you add in wireless, camera, and even speakers, you can get a swarm that can cooperate on tasks.

Seven Predictions for 2021According to the article, they can make displays, transport objects, and draw things. You might think of that Bruce Willis movie with the cockroach bomb when you envision futuristic cyborg cockroach swarms.

The upshot is that there is an emerging market for robot swarms. They can and will be used for everything from warfare to art and advertising. The growth in this area — which is just one segment of SC — will be facilitated by technological improvements in artificial intelligence, special recognition sensors like lidar, big data, and 5G communication between machines (IoT).

One company I recommended that makes sensors and headsets is up 55% since I recommended it on December 11, 2020, to BBR readers. That was less than two weeks ago!

Cloud revenue growth is expected to continue to boom at 30%-plus over the next decade.

According to InfoWorld, Deloitte predicts that “global cloud spending will grow seven times faster than overall IT spending through this period, [while] IDC forecasts that worldwide spending on public cloud services and infrastructure will nearly double, to around $500 billion, by 2023.”

If you don’t own Microsoft (NASDAQ: MSFT) and Amazon (NASDAQ: AMZN), you should, and now is a good time to buy as they have been consolidating for the past six months.

Prediction: Microsoft and Amazon will continue to dominate in the cloud. Share prices will climb more than 30%.

5G cellphones will continue to build out. This will produce an internet that is up to 100 times faster. It will also create a tremendous amount of new data. The great irony of 5G is that after the data fly through the air, they must end up at a server farm. And to do this, it will need up to 10 times the amount of fiber optic cable now used. Companies like Corning Inc. (NYSE: GLW) and Hammer Fiber Optics Holdings Corp. (OTC: HMMR) will benefit.

I’ve been big on fintech for a while now. Square and PayPal have seen their share prices grow more than 100% this year. Next year this will continue but adjust. In 2021 the end of COVID-19 fears will see a jump in international trade and payments. The big winners will be Mastercard (NYSE: MA) and Visa (NYSE: V), which have been relatively flat this year.

Emerging markets (EMs) have been undervalued for almost 10 years, but now they are at the extreme. Every dog has its day and that day is about to show up for EMs.

First of all, in an era of exploding valuations in the U.S., EMs are cheap. Furthermore, a falling dollar, Wall Street seeking yield, and China stocking up on commodities will be the catalysts for a once-in-a-generation rebound.

Here is a chart showing the relative value of the S&P 500 versus emerging markets. 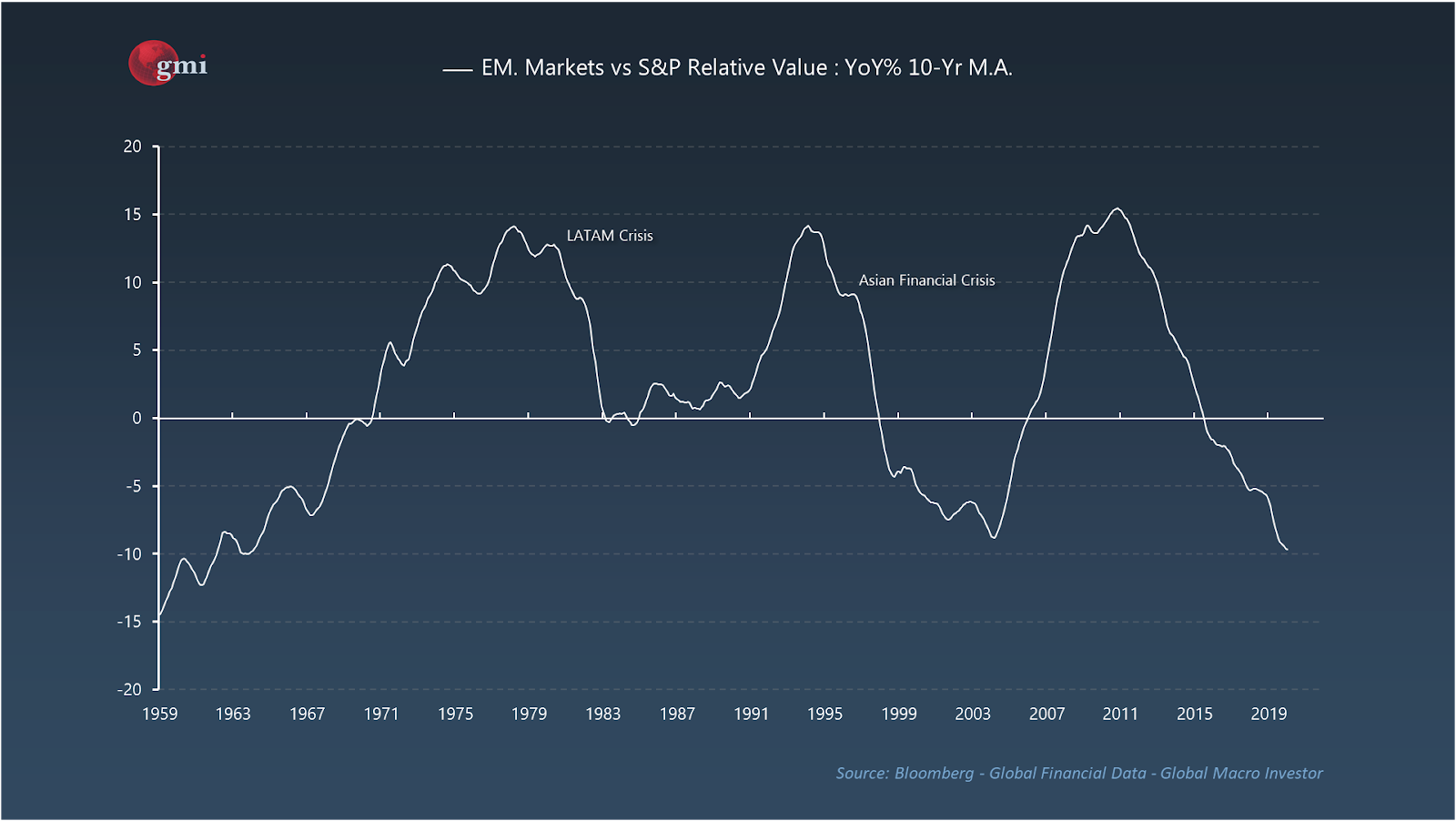 Emerging-market stocks are cheaper now than at any other time going back to the mid-1960s.

You Could Buy the ETFs

Vanguard has the best expense ratio of the three. IEMG has the highest dividend at 3.07%, but the other two are similar.

Prediction: 2021 will be the year of the emerging market.

Happy holidays and best wishes for the new year,