Seek Shelter in This Recession-Proof Oasis

Battle-weary investors who need a place to recuperate from the past months’ harsh sell-off need look no further.

One particular industry is famous for surviving the brunt of the recession while also handing back solid returns. It’s all thanks to the magic of inelastic demand.

There’s a catch, though. Isn’t there always?

While a huge portion of the market is licking its wounds and playing conservatively, major institutions are doubling down on a buffet of cheap stocks.

They're narrowing their focus down to only the most reliable, practical plays. Long-term tech moonshots are almost extinct, and promising startups are being neglected.

In today’s market, investors are looking for reliable short-term payouts. Who can blame them? Given the state of the world economy, it’s unclear when the situation will stabilize.

One of my personal favorite recession-proof industries is biotech. Medical care is some of the most inelastic demand there is, considering most patients don't have the luxury of cutting back on their meds.

I’d be remiss not to mention that a truly alarming amount of people do attempt to ration medicine during hard times. It’s a horrific symptom of the total failure that is the U.S. healthcare system.

But that’s a discussion for another time.

On the whole, the huge sums of money that flow through the healthcare system don’t stop for anyone.

Barring something like a meteor strike or alien invasion, Big Pharma is still getting paid.

There’s plenty to be said about the ethics of the “pay or die” system America currently uses. I’m sure there are plenty of Buzzfeed Op-Eds already written about it.

But the same principle that ignites the anger of the left also makes biotech such a strong investment during a recession: necessity.

While most people won’t cut down on medical care, they will cut down on everything else to pay for it. In these cases, insurance companies can dish out hundreds of thousands of dollars per patient.

The brick and mortar of the medical system isn't going anywhere. But development of new drugs — typically one of the best ways for investors to score insane gains — has been dwindling lately. 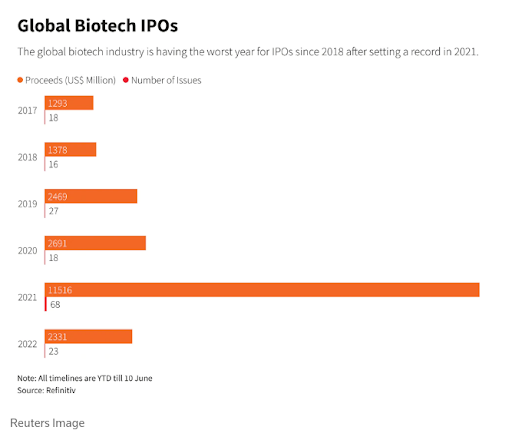 2021 was a breakout year for the industry. CRISPR, anti-aging drugs, mRNA vaccines, and more debuted into the waiting hands of massive investors.

Then development stalled due to COVID slowdowns, and investors became acquainted with the fickle nature of biotech itself. Many of these companies made a great case, but the technology itself never panned out.

Burning through $100 million in seed money typically burns bridges with investors as well. After more than a few overly enthusiastic benefactors got burned, the industry contracted — but it didn't disappear.

Today’s biotech investor, the one who didn’t panic sell last quarter, isn't concerned with the wonder drug of tomorrow.

According to analyst reports, most investors are putting their money in established companies with the potential for regulatory approval this year, not at some undetermined future date.

These highly paid fund managers are taking the same advice that we told our readers years ago. Sometimes, even the so-called best in the business are behind the curve.

Biotech Lives and Dies by the Stroke of a Pen

If you're planning to invest in this industry, you're going to need a calendar. Biotech stock prices move according to a very different set of rules than tech or energy.

In the case of breakthrough medicines, the FDA plays judge, jury, and executioner.

Following all the important dates and decisions from each regulator is a monumental task. These organizations put out an enormous amount of highly technical data.

I’m partially convinced they make their releases as jargon-filled as possible to make them purposefully inaccessible.

But the payoff for digging through this mountain of data is sweet. When a new drug finally passes inspection, it can send share prices into the stratosphere.

Take the COVID vaccines, for example. Although the approval process was rushed, Moderna's stock went through the roof after the decision. One simple press release can bring life or death for even the most established pharmaceutical company.

If you have about 30 hours of free time each week, you could spend your time combing through the deluge of trial results and clinical data. The importance of due diligence can never be overstated.

But if you’d prefer valuable biotech insight without hunching over a computer for most of your life, you’ll want to check out “Project Greenlight.” Our team prepares a complete list of the most promising biotech plays based on upcoming FDA decisions.

Let us do the legwork for you — it just might help your portfolio survive the recession.