Save the Planet and Get a Fat Dividend

As a Boy Scout and long-distance hiker, I considered myself an environmentalist growing up. My family camped in national parks around the country. The last thing I do when leaving a campsite is make sure the fire is cold and pick up any trash, including tiny scraps and cigarette butts left by the last campers.

Heck, I’ll even put aluminum cans and sometimes even plastic in recycling. Though I do the latter because I don’t have the time or energy to explain to some shrieking harpy that plastic isn’t cost effective for recycling and, since China stopped taking it last year, that it goes into landfills.

In many states, even mixed paper has a negative value. According to the NY Times, one major recycler in Oregon has told its customers to put everything in the trash except for corrugated cardboard, milk jugs, newspapers, and tin and aluminum cans.

In fact, recycling stuff that can’t be recycled costs more money and means more stuff is put in the landfill. Recycling experts call it “aspirational recycling,” or “wishcycling.”

From the Baltimore Sun:

“People are thinking they’re doing the right thing,” said Michael Taylor, director of recycling operations for the industry giant Waste Management. “Our message is, when in doubt, throw it out.”

That’s right. Recyclers want you to throw more stuff out...

Environmentalism has become a doomsday cult. It’s about scaring people so politicians can gain power and money.

The new socialist “it” girl Alexandria Ocasio-Cortez wants to spend four times GDP on a Green New Deal. This is amazingly ambitious for a group that had to take down its Green New Deal website due to mistakes.

Bloomberg is reporting that all of the Green New Deal giveaways would cost $93 trillion over 10 years. That is over four times annual U.S. GDP. Ridiculous.

People can’t even build a convincing argument that climate change is real, is caused by humans, and can be solved.

They tried a big green initiative in Germany that was funded by a tax on energy of more than $20 billion a year and subsidies of $800 billion. It is true that renewables climbed to 30% of energy use, up from 7% in 2008, but emissions didn’t decline that much.

Why? Because the Germans, in their infinite wisdom, got rid of their clean nuclear power and had to make up the shortfall in coal.  Coal now produces 37% of the country's power. In fact, in 2016, seven of the 10 worst polluting facilities in Europe were German lignite plants.

Not only that, but Germans pay out the nose for electricity — 33.1 cents a kilowatt-hour on average. I pay 7.7 cents here in Maryland. That's absurd.

It should be noted that German GDP was $3.752 trillion in 2008 when the green initiative was created. In 2017, it was $3.677 trillion. That’s a decade of stagnation, worse emissions, and higher costs across the board. In other words, its green initiative has been an abject failure.

There is always some portion of the population that, when confronted with a problem, real or imagined, always wants to “do something.” Even if that something is counterproductive.

They don’t get that humans are nothing more than smart apes banging on stuff with a crowbar. Sure, sometimes it works. But you can’t tell me that climate change — a problem with billions, nay, trillions of inputs — can be solved by a handful of well-meaning politicians and actresses who graduated from the Sony Pictures Between-Takes High School.

Heck, they don’t even know what they are trying to solve, much less how to do it. I do know that all their solutions, coincidentally, give them more power and money.

Take, for example, the United States. Ten years ago, the environmentalists were screaming about the evils of fracking. There were movies with flames coming out of kitchen sinks and big news stories on earthquakes and fracking poisoning the water table.

But here is the deal as reported by the EPA:

How can this be? The U.S. didn't sign the Paris Accord. It's because fracking produces a huge amount of low-cost, clean-burning natural gas. This has replaced coal in power stations. The U.S. LNG exports are also set to boom — not because of environmentalist, but in spite of them.

Developed markets produce less pollution than emerging markets. You only have to get off the plane in Beijing or Mumbai to realize this simple fact. But here is an academic chart anyway: 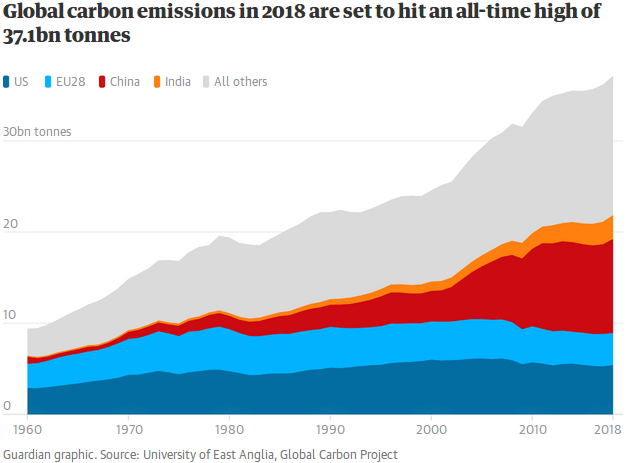 In the U.S. and the EU, emissions are down. They are up in India and China and the rest of the world.

If you want emissions lower, the best way would be to turn India and China into advanced economies, from emerging markets into developed markets. In other words, make them rich. To do that, you must buy their products.

The more you consume, the more wealthy and educated they will become. In this way, they will pass through low-level industrial production to higher-level, cleaner service industries. More money also means more childhood nutrition, which equates to higher IQ and more education. This, in turn, will lead to concern about the environment.

While we are waiting for this, the U.S. should export its surplus natural gas and high-yielding coal to replace Asian reliance on soft brown coal in power plants. It would do far more for this planet than anything AOC comes up with, and because these methods are profitable, they will not only cost nothing but will also pay you a nice dividend.

So the next time some Birkenstock-wearing, tree-hugging do-gooder tells you to recycle that yogurt cup, sit down and patiently explain to them that they are wrong. The way to a better planet is to consume more plastic and frack more wells.