When it comes to volatility, perhaps no sector has suffered so much as natural gas.

Let’s face it, folks: Natural gas prices have been abysmal.

There’s a very good reason why.

To better understand why natural gas at the Henry Hub is trading around $2.35 per MMBtu today, you first have to understand where we were more than 10 years ago — before plays like the Marcellus Shale transformed the United States into an absolute global energy powerhouse.

In 2007, the United States was in deep trouble.

Before companies had started utilizing horizontal drilling with hydraulic fracturing to tap into our wealth of tight gas resources, production had been practically flat for nearly 20 years.

At its core, the issue in the natural gas market over the last decade has been the incredible growth as shale gas production grew at an astronomical growth rate.

Virtually ALL of that growth was due to the Marcellus.

In fact, that one shale gas region accounts for roughly 70% of U.S. dry shale production.

If you haven’t seen this kind of impressive growth yet, let me show you what a true boom looks like: 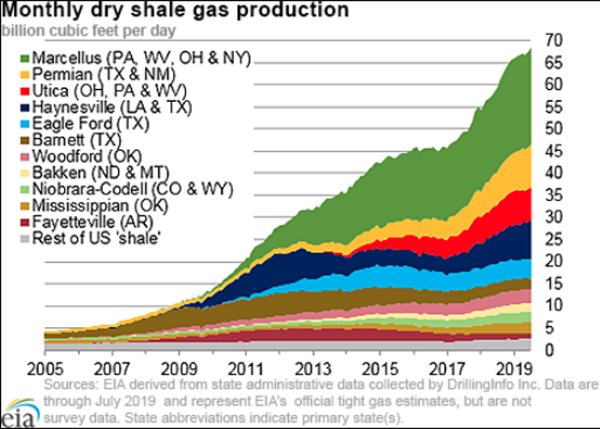 But the shale boom wasn’t without consequences...

The flood of natural gas that came online drove prices into the gutter.

Right now, prices are trading at a three-year low.

There’s no question that it was one of the most volatile sectors for investors to navigate.

Now, this volatile market is home to one of the safest investments on the market.

To Asia, and Beyond!

“What changed?” you ask.

That was when Cheniere submitted its application to build the Sabine Pass terminal and became the focal point for U.S. LNG exports.

At the time, there weren’t any doubts where these LNG exports were headed: Asia.

Long thought of as the primary driver for LNG demand growth, countries like China, Japan, South Korea, and India seemingly couldn’t get enough of it.

Only a handful of LNG buyers make up half of the global market.

Some analysts expect their demand to jump four-fold over the next decade.

Thing is, it turns out it’s not just Asia that is developing a taste for U.S. LNG.

Over the last year, Europe has been importing more and more of it.

As you can see below, we’re now shipping more LNG to Europe than Asia: 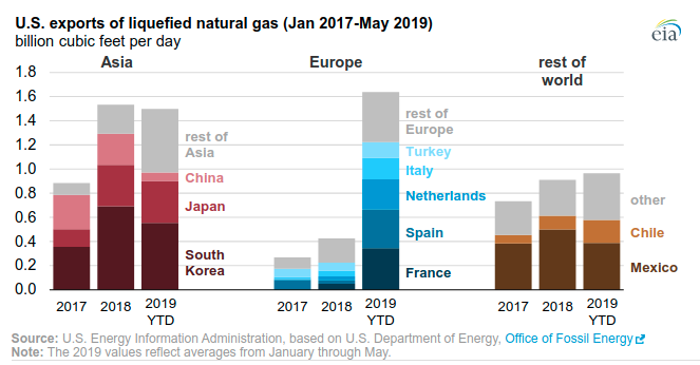 If I had told you in 2007 that the U.S. would become a top exporter of natural gas, you would’ve laughed me out of the room.

Now, the fight for first place has begun.

Reuters recently reported that the United States is now the third-largest LNG exporter on the planet, just behind Qatar and Australia.

U.S. LNG accounts for approximately 10% of the global market.

But things are only just starting to heat up.

So far, the clear winner in this export boom has been Cheniere’s Sabine Pass.

And investors in it for the long term are being rewarded handsomely. Cheniere Energy Partners (NYSE: CQP), which owns and operates the regasification facilities at Sabine Pass, is currently shelling out an annual yield of more than 5.5% at the moment.

Cheniere was first, but it won’t be alone much longer.

On July 31st, the Department of Energy announced that it had approved Gulf LNG Liquefaction Company for exporting domestically produced liquefied natural gas.

Gulf LNG’s project will be constructed in Jackson County, Mississippi.

As it stands now, there’s a record amount of natural being delivered to current U.S. LNG export facilities. In July, these LNG facilities bought a record of 6 billion cubic feet per day of natural gas — that’s around 7% of our total dry gas production!

Is it only a matter of time before the U.S. is on top of the LNG market?

Do NOT Miss This Profit Windfall... Again
Energy and Capital editor Keith Kohl steps back and takes a look at an energy boom that is seven years in the making, and why now is the perfect second chance for new investors...
10 Million Barrels a Day or Bust
Energy and Capital editor Keith Kohl takes a hard look at why the U.S. is poised to become the world's largest oil exporter by 2024 and what investors can do to get a piece of the action....
LNG: America's Greatest Energy Export
LNG has become one of the most important and profitable American exports for both investors and corporations alike. And while the mainstream headlines continue to ignore the profitable opportunity, the smart money is getting positioned.
America Set to Lead Global LNG Market
According to a new report from Global Energy Monitor (GEM), over $1.3 trillion is being invested right now in over 200 LNG terminal projects around the world. And more than 70% of global LNG investment is being focused on North America.
Billions Being Spent on Global LNG Projects
The liquefied natural gas (LNG) market has emerged as the hottest sector in the energy industry right now. Billions of dollars are being spent on developing LNG facilities all over the world.
Hydrogen Fuel Cells: The Downfall of Tesla?
Lithium has been the front-runner in the battery technology market for years, but that is all coming to an end. Elon Musk is against them, but Jeff Bezos is investing heavily in them. Hydrogen Fuel Cells will turn the battery market upside down and we've discovered the tiny company that is going to make it happen.