The Safest Stocks to Own Right Now

One of the best pieces of investment advice I ever got was from a hedge fund manager in New York.

His name was Jimmy, and he acted exactly as you’d expect a hedge fund manager to act.

For him, life is all about making money. And he’s never made a single apology for it.

Truth be told, he’s not a very nice person, either.

He treats his employees terribly, talks down to anyone who isn’t either wealthy or famous, and if the price was right, he’d probably sell his own mother.

But despite all that, there’s no denying that Jimmy knows how to build fortunes.

He’s actually one of the wealthiest people I know, boasting top-of-the-line everything.

He vacations with celebrities in St. Barts, the French Riviera, and Dubai. He even stayed in the famous Royal Suite at the Burj Al Arab, which is one of the most expensive hotel rooms in the world, running about $25,000 a night.

Look at this thing... 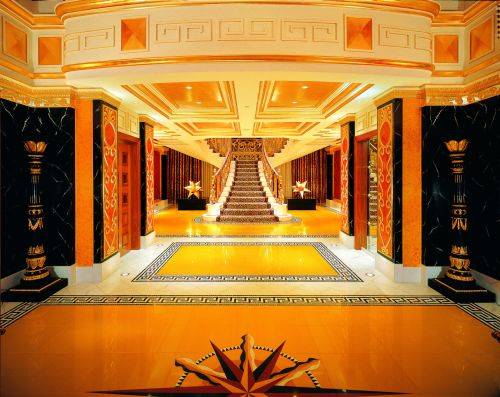 And that’s just the entrance!

This guy makes Gordon Gekko look like an amateur.

That being said, despite the fact that Jimmy and I don’t see eye to eye on much, I know that when it comes to creating wealth, Jimmy’s one of the smartest guys in the room. And I have taken plenty of advice from him over the years.

But the one piece of advice that has proven to be the most valuable was this...

Always dedicate a large portion of your portfolio to industries that are recession-proof, because no matter how high the markets fly, they’ll always come crashing back down to earth.

Given the action in the broader market this week, I was reminded of this advice.

Love him or hate him, Jimmy’s right.

And over the years, I’ve tried to ensure that much of my exposure is to industries that will survive in both good times and bad.

Because when the proverbial poop hits the fan, and it always does, there are just some industries that weather the storm the best.

Booze, cigarettes, and gambling have always been relatively recession-proof.

Cannabis is quickly falling into this category, too.

In fact, on Monday, when the market tanked more than 1,000 points, most cannabis stocks were either up or at least stable. We’ll see more of this in the future, which is why I continue to invest in cannabis stocks.

I’m also fond of companies that are providing big disruptions in tech and biotech...

Particularly those that have come up with new ways to save lives.

Because make no mistake: Even if the market is in the crapper, companies that provide life-saving drugs and therapies will continue to make money.

There have been dozens of biotech discoveries throughout history that have changed the world — and made a lot of early investors incredibly wealthy along the way.

From the first successful vaccination in 1798 to the mapping of the human genome in 2000, biotech breakthroughs have allowed us to battle diseases that were once considered incurable, and ultimately save millions of lives.

These types of breakthroughs are so valuable that it’s sometimes difficult to put a price tag on them. But make no mistake, in good economic times and bad, biotech discoveries that keep people healthy and alive are virtually immune to market downturns.

And that’s why I’m writing this piece today.

On Monday, my colleague Alexandra Perry wrote about a new technology called CRISPR-Cas9.

This is a revolutionary new gene-editing method that could realistically end nearly every major disease that plagues the human race: cancer, AIDS, heart disease, diabetes, Alzheimer’s... the list goes on and on.

The discovery of CRISPR-Cas9 is so important to humanity that it can be compared to the discovery of penicillin, vaccination, X-ray machines, and anesthetic.

I was actually so intrigued by CRISPR-Cas9 that last year I hired a university researcher who specializes in this technology to educate me on it.

My friend, I’ve been to the labs and interviewed specialists.

There is no doubt about it...

CRISPR-Cas9 is about to change the world forever.

It’s going to enable the complete eradication of the world’s deadliest diseases, and the companies developing this stuff are going to make billions over the next few years as it starts to roll out.

Now, I know a lot of people aren’t that familiar with this technology, but I’ll tell you who is...

Sean Parker (net worth: $2.6 billion) has ponied up part of a $250 million commitment to CRISPR research.

And those are just the billionaires you’ve heard of.

There are others, like my friend Jimmy, who are also ponying up millions in an effort to profit from what will soon prove to be the greatest biotech breakthrough of the 21st century.

Because I know that no matter what happens in the broader market, a technology that can eliminate nearly every disease that was once labeled “incurable” is a no-brainer.

Now, like I said, I hired a university researcher to help me analyze the CRISPR market, and through his research, I’ve identified four companies that have first-mover advantage in the rush to get CRISPR to market.

I’ve outlined these companies in a new report called, “The End of Disease: The Last Investment You’ll Ever Need to Make.”

This report will be made available to Energy and Capital readers tomorrow. So keep a look out for that.

The report also outlines how we plan to profit from CRISPR-Cas9, or what many are now simply calling the “Genetic Gold Rush.”

You don’t want to miss out on this one!