Preparing for the 2012 Natural Gas Rebound

It's all quiet on the natural gas front.

One glance at how prices have drudged along since 2008's record, and we can see why other investors are scared to dip their feet into natural gas stocks. 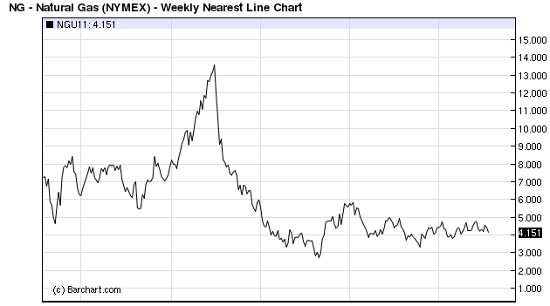 Unfortunately, those investors waiting for a return to $13/Mcf before they take action will be too late...

The current supply glut plaguing North American natural gas markets could ease as early as next year. And there's no shortage of new supply, either.

Despite the grab bag of economic troubles we've been handed since the meltdown in 2008, U.S. natural gas production has continually increased. Adding the shale gas boom to the mix has dramatically pushed production higher.

The resulting price plummet was painful to watch.

However, our natural gas rally could come as early as 2012. Although production is expected to jump nearly 6% in 2011, it's projected to be nearly flat in 2012.

We also know demand is on the rebound.

In 2010, our consumption of natural gas hit a new record of 24.1 Tcf. Take a look at the EIA numbers, and you can see that it's heading even higher:

Not only has this bolstered our outlook for natural gas stocks, but it's also caught the eye of some major players.

Remember Exxon's first foray into shale gas? Thanks to the $41 billion deal to buy XTO Energy, Exxon can now boast a 20% increase in production.

If $4/Mcf natural gas has you doubting the profitability of these stocks, it might be time to re-evaluate your position. Even though the EIA's latest report showed a net build of 43 Bcf in working natural gas storage, we're still 65 Bcf below the five-year average and more than 200 Bcf less than a year ago.

And it's not just producers that are turning our heads.

Next week, I'll show you why some of the best natural gas picks in today's market haven't drilled a single well.

African Oil Hunt: Securing Billions in Oil Profits
As companies scour the globe to meet tomorrow's energy demands, editor Christian DeHaemer's a step ahead. In his latest investment report, he highlights one part of the world that's only now starting to show up on everyone else's radar — and his readers are already laying claim to this $267 billion oil and gas fortune...

Surviving an Oil War: Looking Beyond the Peak Oil Crisis
For more than forty years, the United States has been fighting a losing battle against Peak Oil. It's led us to explore and develop resources from areas previously considered impossible to tap — and it's this revival in our domestic drilling that's delivering in-the-know investors huge returns.

The Prelude FLNG Project: Welcome to The LNG Century
It's five times the size of a supercarrier, costs 11 billion dollars, will reduce the volume of natural gas 600 times, can survive a force-five typhoon... and it's coming.

The World's Only Pure Gold ETF: Does It Shine Enough?
Luke Burgess discusses the investment upside to investing in pure gold stocks and talks about the new pure gold equity ETF from Global X Funds.

The Nuclear Industry Lives: Will Be Energy Staple for Decades to Come
Allow me to make a statement without any qualifiers: The nuclear industry is not dead.

2011 Second Half Market Predictions: The Safest Places to Invest Now
Analyst Ian Cooper reviews his early 2011 stock market predictions, explaining where we stand at the halfway point, and offers four trends to keep on your radar for the rest of this year.

World's Largest Gold/Copper/Moly Mine: Real Assets For Sale - Cheap
I'll give you my best contact in Mongolia...

Paying Down the Debt: Is Being Poor a Choice?
This all comes back to what I've been telling you for months now: You need only worry about yourself.

Lola Wants Gold: And So Do You!
The herd wants free money in the worst way. And that means gold is just going to keep rising.

Peak Oil: When Saudi Spare Capacity Falls Short
Keith Kohl reveals why the Saudis are on the verge of panic over their ever-rising oil demand.