How Canada is Suffering from Peak Natural Gas

Editor's Note: For more information on the topic, check out our updated resource page on natural gas companies...

Alberta wears the crown when it comes to Canadian energy — and they know it.

How do I know? I heard it firsthand.

Now some of you might remember the last time I was on the road to Fort McMurray. Well, there was one part of my trip that I've kept to myself — until today. . .

It was just after four in the morning. I was speeding north on Highway 63 — the only major road leading to and coming from Fort McMurray, as far as I could tell. My cohort had just finished his eight-hour shift at the wheel. . . within minutes, he was fast asleep.

With about an hour to go until we reached the town, I noticed a car on the side of the road. At first, I could barely make out the car's outline — it was still very dark out. As soon as I realized it had broken down, I couldn't help but stop to offer help. A few greetings were exchanged and the next thing I knew, we were a trio headed for Fort Mac.

The conversation was pleasant enough. My new friend was telling me what he does for a living. . . believe me, driving those mammoth trucks around the sites sounds like a much more exciting job than I ever would have imagined. I told him about the obsession I had developed for the oil sands and how I just had to see it with my own eyes.

"We have the Energy," he quietly mused to himself as we drove along. It wasn't until we entered the town that I realized why he said that.

As you can see, it's a sort of slogan for Fort McMurray. 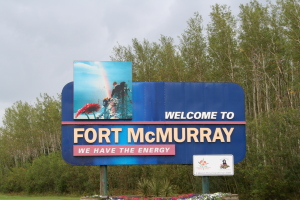 But it's more than a tag line. . . it's a feeling that resonates from the people in Alberta, from everyone I met during my trip — and not just from those who are directly involved with the oil sands.

But what my friend may not realize, or what he may not want to admit, is that Alberta's energy crown is slowly slipping. . .

You see, things haven't been so great for Alberta recently.

Today, I'd like to focus on natural gas. We can save an oil sands recovery for another day and another article.

Producing about 6 Tcf of natural last year, Canada exported approximately 3.6 Tcf directly to the United States. Needless to say, they're our largest source for natural gas imports. . . and Alberta is home to an overwhelming share of that production.

The problem, however, is that production in the Western Canadian Sedimentary Basin (WCSB) is declining. Production peaked in 2001; the vast majority of the country's natural gas is produced in the WCSB. According to Canada's National Energy Board (NEB), Canada's marketable production peaked around 17 Bcf/day in 2001.

Sadly, no amount of drilling is going to reverse the decline. Production declined in 2005, despite having a record number of well completions in the WSCB. Take a look for yourself: 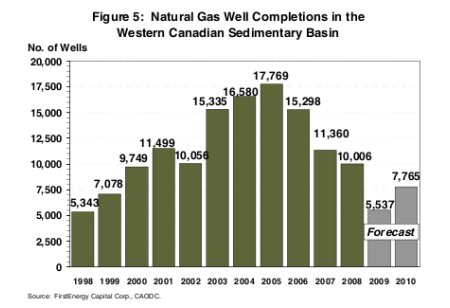 If we take a look back, 2005 should have been a huge year for Canadian natural gas. That year, we saw the most active Atlantic hurricane season in recorded history. Fifteen hurricanes blew past us. Five became Category 4 hurricanes and four reached Category 5, including Katrina and Wilma.

That same year, Canada imported 3.7 Tcf of natural gas to the U.S. However, Canadian production of marketable natural gas fell 1.7%, compared to 2001 levels. According to NEB projections for 2009, natural gas production will sit at 5.5 Tcf — 12% lower than in 2001.

And if the WSCB's decline has you stumped, there's a bright spot on the horizon. . .

Investing Ahead of the Curve

Over the past few years, I know you've seen the move to develop unconventional gas resources. It makes sense. After the success of the Barnett Shale in Fort Worth, Texas, shale basins across the U.S. have been prime real estate for natural gas companies.

It's this same trend that we're now seeing in Canada.

Call to mind the trouble Alberta's been having trying to keep production up. . .

There's but one province that has managed to increase natural gas production year after year: British Columbia. Back in 2000, BC made up just 12% of Canada's overall production. Since then, that share has grown to over 18%.

The Horn River Basin isn't news to us. In fact, I still believe this unconventional shale play is one of the best-kept secrets in natural gas discoveries. It's a trend too costly to ignore.

Please don't get me wrong: Alberta is will continue to be a powerhouse for Canadian energy. But I've found, more often than not, it's worth it to stay ahead of the curve. Once BC gets a sufficient infrastructure in place (a few pipeline stocks come to mind), they're going to give Alberta a run for their money.

Back from Fort Mac

After dropping off my new friend at a local garage, the rest of my trip seemed to pass too quickly.

And now that I think about it, the next time I get the itch for a 40-hour journey across North America, you can bet I'll go even further this time. If things keep developing the way they have been, I have a feeling this trip will come up sooner than I expect.

Editor's Note: The way I see it, there's two kinds of investors. The first group sits around, endlessly waiting in fear for the right stock to come along. When they finally decide to invest their hard earned money, they almost always panic at the first sign of trouble and lose their shirts.

The other kind of investor sees an opportunity and knows the right time to strike. In the last few weeks, my readers at the $20 Trillion Report are already up 13% and 17% on their latest natural gas stocks. But the gains are just getting started. You can get the whole story here in my new report.