Scraping the Bottom of the Saudi Barrel

At least it seems that way right now.

The rig count in the U.S. has been decimated over the last year and a half. Drilling activity is at record lows. Even U.S. oil production growth is finally slowing.

Meanwhile, Iran made its grand re-entrance into the global oil markets, with only a few customers on board.

There's even a growing contingent of OPEC members (Iraq, Nigeria, and Venezuela, to name a few) that are imploring Saudi Arabia to agree to a cut and help boost crude prices.

Believe me, nobody is making money with oil at $30 per barrel. The situation is even more painful when you take into account the fact that oil revenue is what's fueling government spending in many of those countries.

It sounds like Saudi Arabia got exactly what it wanted, right? It's retaining market share, even if it means driving its fellow OPEC brethren to the brink of collapse. Moreover, U.S. shale drillers are struggling to survive the mountains of debt they took on to sustain their drilling frenzy over the last eight years.

Unfortunately, the future's not looking nearly as bright for the House of Saud...

Let's also not forget that when oil prices dropped, so did drilling costs here in the United States.

The cost of production in the U.S. has declined as much as 40% as producers moved to keep operations economical.

Granted, companies still had to shut down rigs left and right...

But production kept going up anyway. In the past year alone, the Baker Hughes rig count has dropped from 1,125 to just 480 while production continued to climb towards 10 million barrels of oil per day.

Most companies only need oil prices to trade in a range of $50 to $60 per barrel to put those idle rigs back online. Then again, some never stopped drilling in the first place!

The drop in break-even prices has made the cost of new exploration low as well.

So any significant price recovery could spark a surge in the E&P sector.

Remember, there's a considerable “fracklog” to keep in mind, which is simply a backlog of drilled yet uncompleted wells just waiting for the right economic conditions to emerge.

In other words, the Saudis have to tiptoe around the topic of boosting oil prices or else find themselves right back where they started.

But that's not even the worst news for Saudi Arabia...

To put a little perspective on just how desperate the Saudis are, the country is now hoping to secure a $10 billion loan from international banks.

Sure, the country may have a huge amount of cash, but without this loan, they'll be burning through it at a rapid pace — especially during a low oil price environment. In fact, Saudi Arabia is running a nearly $100 billion budget deficit.

Of course, there's also another problem surrounding this output freeze.

The world's largest oil producers will be freezing output while it's at record levels (one of the reasons Iraq and Iran will never agree to do it in the first place!).

More important, however, is that Saudi Arabia is leaving the most oil on the table. After all, the Saudis hold the lion's share of spare capacity: 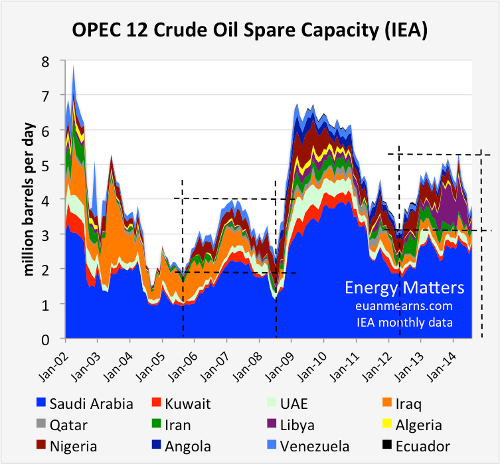 In other words, their hands will be tied.

If any oil rally takes place, it will be a very fragile recovery. And while the Saudis will be bound to any agreements to freeze production (let's play the optimist and assume they won't go back on their word), U.S. producers will have plenty of space to grow.

The fracklog will ensure that much.

Of course, there's already a civil war brewing inside the 13-member oil cartel. In fact, the situation is far worse than you might first think.

And the dominoes are only just starting to fall... Stay tuned.