OPEC Is Dead: What's Next?

The dominoes are falling all around OPEC.

In three months, the 14-member group of oil exporting countries will be down to 13.

No, it really shouldn’t come as a shock to us.

I’ve told you before that OPEC as we know it is dying. The cracks in the oil cartel have been showing for years, and for us it’s only a matter of time before it collapsed.

How could anyone NOT see this coming?

One of the first red flags occurred back in 2015, when Indonesia was re-given its membership card — despite the fact that it didn’t export a single drop of oil!

For the record, Indonesia had been a net petroleum importer since around 2004. The country just couldn’t adjust for the fact that its crude consumption had soared over the last two decades.

Indonesia was kicked out less than a year later.

When Qatar left OPEC on January 1, 2019, most people looked the other way because it wasn’t a major oil producer anyway. Although Qatar is the largest LNG exporter, it was disgruntled over Saudi Arabia’s control of OPEC.

Now we know another OPEC member is making a run for the exit.

And it couldn’t have left at a worse time for the group.

So Long, and Thanks for No Oil

According to them, the reason was due to deeper issues and internal challenges regarding its fiscal sustainability.

We’re not talking about the biggest fish in the OPEC tank, mind you. Ecuador only extracts roughly 540,000 barrels of crude oil per day.

In fact, Ecuador only contributed about 10,000 barrels per day to the production cut deal… and only achieved 5,000 bbls/d of that amount last month.

So they’re really only a drop in the bucket to the group’s combined output of 28.9 million barrels per day, but one has to wonder, “Who’s next?”

The answer may be a little more unsettling than you might think.

Perhaps Venezuela is next on the chopping block.

After all, Venezuela’s oil production has been in free-fall for well over a decade, with output falling to around 670,000 barrels per day in September.

I don’t think it’ll be long before another crisis hits Venezuela’s beleaguered oil industry. I’m afraid that one day in the near future, we’ll be talking about PDVSA’s production falling to zero.

From the way things have been going lately, however, Maduro may not be next in line to fall from OPEC.

OPEC Is Dead: What’s Next?

After the Saudis effectively bullied Qatar out of OPEC, they have clearly set their sights on Iran.

Or, I should say, Iran had its sights set on Saudi Arabia… at least its drones were.

One of the biggest lessons we learned over the last few weeks was just how fragile Saudi Arabia’s oil infrastructure is right now.

No matter how you look that situation, I can guarantee you it won’t end well for OPEC.

My colleague Luke Burgess talked about the harsh repercussions of a Saudi-Iran conflict on Monday.

What that would also mean is a fundamental transformation of OPEC itself.

Iran is currently its fifth-largest oil producer, yet it's pumping oil at less than half of what it would be without U.S. sanctions in place.

How long until Iran takes the same route as Qatar and marches out of the picture?

The answer might surprise you: It doesn’t really matter.

What comes after OPEC?

Well, just ask yourself what you would do.

In this case, the Saudis are looking for more friends.

More important, however, is that they have already lined up OPEC 2.0.

OPEC’s power over oil prices has always been its ability to control global supply.

Take everyone else out of the picture, and you would hardly put a dent in that deal.

Moreover, if the Saudis were operating at full capacity, they would account for approximately 42% of total OPEC supply.

The world currently consumes about 100 million barrels per day: 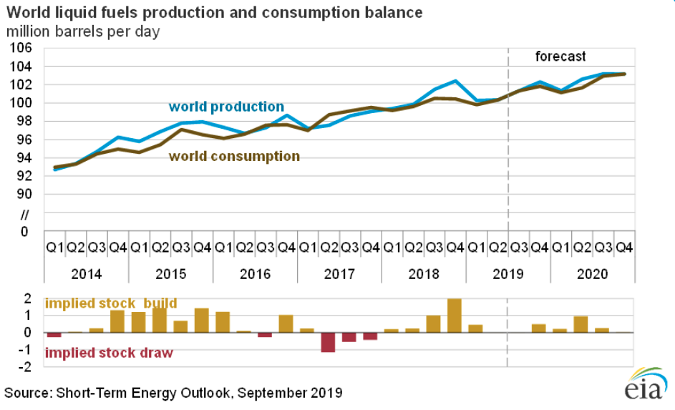 Imagine the control they would have if the Saudis reorganized OPEC with Russia and the United States; let’s even say they allow Kuwait and Iraq to stick around.

Now we’re talking about a group that controls 43% of the world’s oil production.

At its height, the old OPEC never had that kind of power.

And there’s one situation developing right now that would throw the global oil markets into chaos.