Markets are bracing themselves for more volatility.

The blood is flowing freely.

The bulls are cringing.

This time was different, right? It’s perfectly normal for the S&P 500 to run nearly 300% since February of 2009 without a major correction.

But hey… at least Elon Musk shot one of his cars into space. He’s the Flavor Flav of the EV world, without the clock.

Pay no attention to the cash Tesla is burning.

Besides, Tesla has a bigger crisis on its hands.

Assuming you weren’t distracted from the Tesla Roadster snugly tucked inside a SpaceX rocket hurtling out into the cosmos, you might’ve caught wind of the underwhelming deliveries of the Model 3.

Remember, Tesla was supposed to be rolling out 20,000 of these suckers every month by now.

It turns out just 1,543 Model 3s were delivered last quarter. Although there was some good news, such as a record deliveries of the Model S and Model X during the last three months of 2017.

Sure, there are reasons for the slow startup.

Production bottlenecks. Systemic snafus. Call them what you will. The mistakes are being fixed, we’re told.

Now, don’t get me wrong, dear reader; I’m not anti-Tesla.

I just think only suckers are buying it right now.

Put it this way: With a share price at around $325 apiece as I write this, the company is trading at 126x its projected 2019 earnings.

Yet here’s something else to consider…

What if Musk is right?

What happens if the Gigafactory 1 successfully ramps up production?

In that case, then he had better address the other crisis on his hands.

Where will Tesla get the lithium it desperately needs?

Well, that’s the good news… for investors like us, at least.

There’s a full-fledged lithium war taking place right now, with every battery manufacturer on the planet vying to secure its future supplies.

Take a glance to the right, and you’ll see just how quickly China is ramping up its production of new-energy vehicles. 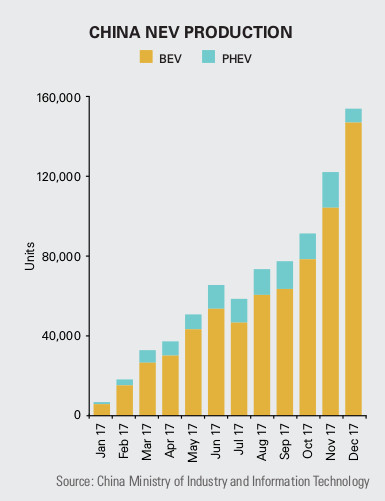 We can’t rightly blame them, of course.

After all, China set a 2019 deadline for its strict production quota for companies to sell a minimum number of new-energy vehicles every year. All sales of vehicles using the internal combustion engine are expected to stop by 2020.

That’s right around the corner.

Yet the real kicker here is that China is almost entirely dependent on foreign sources of lithium and cobalt, practically guaranteeing higher lithium demand.

And if Elon Musk doesn’t secure his own supply of lithium, he’ll soon be in a full-blown panic.

Right now, the battleground is in South America, in an area being called the “Lithium Triangle” that holds more than half of the world’s lithium reserves.

When just three companies control 90% of lithium production AND set their own price, Musk will have more to worry about than whether his Roadster makes it to Mars.

How soon until billionaires like Musk start investing in lithium on a mine level?

Considering his competition, it wouldn’t surprise me in the least.

Put it this way: Musk is already sitting down with SQM, one of those massive lithium producers, to “explore” potential opportunities.

Yes, the market has been in turmoil the last few days… but it’s still insatiable for lithium.

And it just so happens that Tesla and China’s biggest battery manufacturers are about to discover a new lithium source.

Let me show you the real must-buy lithium stocks in the market, and the two that I’ll tell you about in this investment report are trading at a fraction of what the over-priced SQM is right now.

It's time you take the next step.