One Stock to Rule the EV Revolution

Sometimes an opportunity comes around that is simply too good to ignore.

Of course, the veteran members of our investment community here at Energy and Capital have seen one particular opportunity coming for a few years.

All it needed was something to push it over the edge, a trigger that would ensure the market would gain incredible momentum going forward.

Well, last month we saw it.

I’m not intentionally being cryptic with you. In fact, there’s a good bet that you’ve been (or soon will be) personally invested in it in the near future.

I’m referring to the EV revolution.

Again, this doesn’t come as a shock to my readers. We’ve been talking about the electrification of the U.S. auto industry for the better part of a decade.

Like I said, all we needed to see was that little push that would cement EV growth for the next 50 years.

And the Biden administration recently confirmed it.

But in order to take advantage of the latest move by President Biden, we first need to take a look at the most profitable lesson from the 20th century.

The Most Profitable Lesson From the 20th Century

No other company in history had more control of its industry than Standard Oil.

For more than two decades, Standard Oil ruled the oil industry with an iron fist and owned an eye-popping 90% of the refining market.

When this massive company was finally busted up in 1911, it was split into the names you certainly recognize today — ExxonMobil, Chevron, and Conoco.

Yet there was one piece of technology that led to their true success.

Can you think of it?

Surely there are several good answers for this, such as Colonel Drake’s successful use of drilling rigs that kick-started the U.S. oil industry, or perhaps you’re thinking of the genius behind Henry Ford’s Ford Motor Company, which changed the game forever with its conveyor belt-based assembly line.

But I would argue there was another invention that all of those companies relied on more than anything else.

And this critical piece of technology was patented back on October 25, 1885.

Let me show it to you: 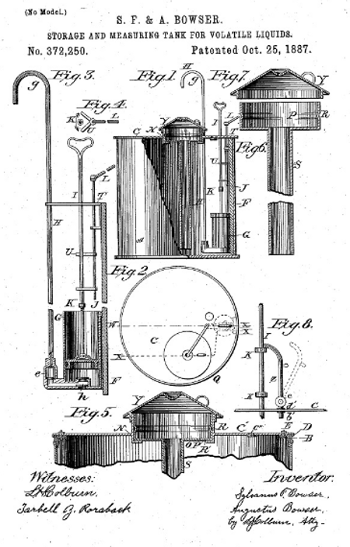 Above, you can see the patent for a kerosene pump that was invented by none other than Sylvanus Freelove Bowser.

Back then, it was used simply as a way to safely measure and dispense kerosene, which was used in lamps at the time.

But Bowser’s kerosene pump was the predecessor of the metered gasoline pump.

As car manufacturing took off in the early 20th century, establishing our network of filling stations was truly the overlooked investment gem that fueled the auto boom.

Today, history is repeating itself.

You just need to be positioned for these profits.

Although many investors over the last 10 years have been skeptical about the EV revolution, all they needed was proof that this boom was truly taking off.

I know it’s easy to point at the upcoming bans on gasoline and diesel cars, from outright bans set to take effect in 2030 in countries like Japan and the U.K to the bans on fossil fuel vehicles in states like Washington and California that will take place within a decade.

However, banning these vehicles in 10 years isn’t what will drive the EV market. The electrification of the global auto industry is inevitable.

But it simply can’t happen until we put the infrastructure in place.

So when the Biden administration allocated $174 billion from the president's infrastructure plan to bolster the adoption of electric vehicles, it included a sizable amount to establish roughly half a million EV charging stations across the U.S. by 2030.

Keep in mind that this is just the tip of the iceberg.

Globally, the market for fast-charging EV systems will hit nearly $65 billion by 2030.

The winner isn’t going to be Tesla.

Don’t worry, Musk and Tesla’s shareholders will get a nice piece of the pie over the next few decades. However, the true opportunity that the entire market has overlooked so far is still wide open.

We’ll talk more about this next week.