NOW Is the Time to Buy Oil Stocks

I hate it when oil prices crash.

So when the market watched crude oil prices experience one of their biggest drops in over three years, the panic set in and the bears took control of the wheel.

Over the last seven weeks, WTI crude prices have fallen more than 34%.

My question to you is: Are you going to capitalize on what’s going to happen next?

Profit from the Shale Band

Every investor out there who has made or lost money on oil in the last decade has heard of the shale boom.

Unfortunately, few have heard of the shale band.

Don’t beat yourself up if you haven’t, because you’re about to see it at work once again. And if you’re one of the few who recognize what’s about to happen, then you’ll immediately know why NOW is the time to buy oil stocks.

The shale band is simply a price range in which shale drillers are profitable.

The idea is that when crude prices drop to around, say, $40–$45 per barrel, companies will ratchet down their drilling activity, and when prices rise over $65 per barrel, they’ll ramp up output.

When you run too far to one side of the band, drillers become predictable.

That makes sense, doesn’t it?

Prices dip too low, and the rig count falls as companies sideline their crews and equipment and wait for more profitable conditions. The consequences of this lead to a dearth in new exploration, as capital spending drops like a stone and the supply/demand dynamic goes askew.

In 2016, roughly two years into the last major bear market, a few Big Oil players like Chevron and ConocoPhillips slashed their budgets by a quarter. Globally speaking, oil and gas spending plummeted to six-year lows of $522 billion.

As you and I both know full well, WTI prices crashed to around $26 per barrel back in February 2016.

It made oil stocks a screaming buy at the time.

We were at the far end of the shale band, and oil was about to come back in a major way.

Since hitting that bottom, oil roared back to life over the next two years, reaching above $75 per barrel until the most recent volatility struck. 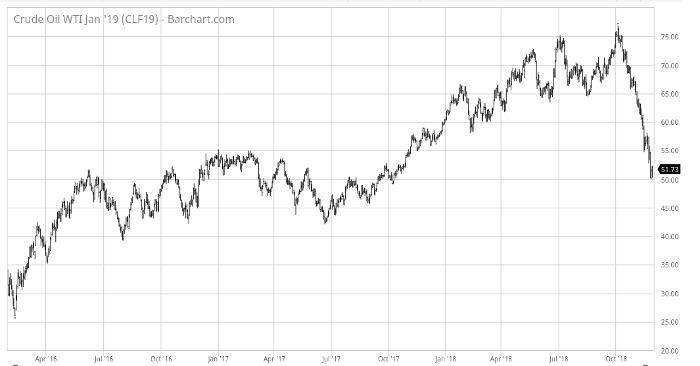 Not surprisingly, oil companies started shelling out cash once again after prices bottomed in 2016.

Welcome to the shale band opportunity.

And it begs the question of how low oil prices will go.

How Low Can We Go?

Yet the situation is radically different than the previous two crashes.

Back in 2008, the looming threat of tight oil development in the Lower 48 was enough to send prices crashing. Between 2008 and 2014, our output soared 75% higher as more tight oil supply hit the market.

Ah, but there’s a small catch in all this...

Unlike the previous crashes, when demand took a nosedive right alongside prices, global demand remains strong.

India’s oil imports rose to around 21 million tonnes in October, which is a seven-year high.

My point, dear reader, is that oil prices will inevitably rise from this level as prices swing back toward the other end of the shale band.

And you need to prepare for the next run higher.