Eyewitness to an Oil Boom

“I was here when it all started, and I'm telling you right now that things are about to get much bigger around this place...”

It was 5 o'clock in the morning. I had been woken an hour earlier by a man who appeared much younger than he looked. He wanted to get a jump on the day.

We were jostling back and forth in his pickup driving west across the North Dakota landscape.

“Is that so?” I asked, trying to warm my hands with a steaming cup of coffee.

I had arrived the day before and was staying at a friend's house about an hour east of Minot, North Dakota. I count myself lucky that I'd known the Jeffreys family for a few years, because finding a room in the town we were headed was impossible.

“That's right,” he said with a hint of pride in his voice. “Grew up a few counties over, right near where we're headed... 'course it was much different back then.”

He was quiet for a minute, then said more to himself than me, “Moved out east during the 70s, and every day I'm wishing I hadn't.”

I knew exactly what he meant...

Within the last ten years, more and more North Dakotans are waking up millionaires, thanks to the shale rush happening right now.

Back in the 1950s, the Bakken formation had a drastically different reputation.

Drillers in the area thought of it as a last resort. It was the worst-case scenario for companies. If all else failed, they'd try to scrape what little they could out of the Bakken.

Oh, how times have changed...

About 10% of all drilling rigs digging into U.S. soil are in this state — and nearly all of them have just one target in mind: 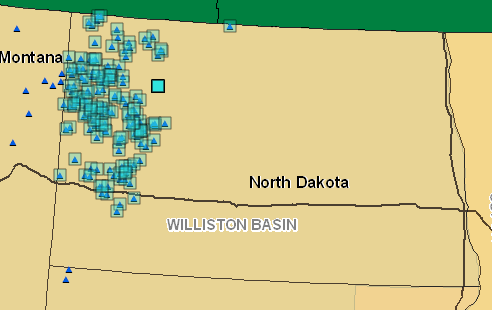 Their drilling frenzy has been rewarded. The feverish pace has driven production on the western edge of the state, and there are no signs of slowing:

After more than three hours on the road, we stopped at a small place to refuel, and it finally occurred to me why we left when we did...

At 8 a.m., the pit stop was completely packed. I wished we'd left even earlier than we had.

The next time we pulled over, I caught my first glimpse of a rig that day. My face lit up, as if it were my first time seeing one.

“I knew they'd be back,” my companion told me. He was referring to the oil price crash in '08, when the price for a barrel of crude dropped to $33. Drilling activity across the country slowed — even in North Dakota, as hard as that is to imagine.

“You weren't worried at all?” I asked politely.

“It was only a matter of time,” he replied. “That's the power of money these days.”

And I agreed with him — especially knowing our domestic crude production has been spiraling downward for the better part of 40 years.

The steel rig in front of my eyes was one of the few reasons to get excited over the U.S. oil industry.

“You know they're not the only ones looking for a piece of the action, don't you?” I couldn't help asking.

Foreign investment is flooding into North America's shale boom. The $4.4 billion that Statoil dished out for Brigham Exploration last month is just the latest example.

Fact is, billions of dollars are pouring into these shale plays. We've talked many times in the past about China's rush to stake its claim in Canadian energy...

I think we're about to see another major deal happen very shortly. China's CNOOC recently scrapped a $7 billion deal for BP's Argentina assets. And we can bet they're not going to let that much cash lie idle in the bank for long.

Personally, I'd rather get more bang for my buck.

Long after the sun had dipped below the horizon, we pulled back into his driveway.

I'd brought up the foreign investment invasion a second time in conversation on our drive back — and he'd surprised me once again.

“You're right about that. That's why I prefer to pick up the smaller fellas.”

I was getting the sense that my friend wasn't as rustic as I'd first thought.

It turns out he may not have become a millionaire from sitting on prime oil real estate... but he was doing precisely what we were: finding the best deals on the best stocks.

After spending billions in the Eagle Ford, maybe China is setting its sights a little higher. And so can we.

But truth be told, putting my cash into China doesn't sit too well with me — not to mention the fact that shares of CNOOC aren't exactly cheap. But we're not waiting around for the Chinese to make their next move.

That's why I've narrowed the playing field for my readers to just three Bakken stocks, all of which are trading for less than $10.

But don't wait too long to get into these Bakken stocks... If you don't play this shale boom now, you'll miss it.