No One Ever Went Broke Taking Profits

On December 7, 2021, I told you that the markets were heading lower and to sell the rips, not buy the dips. This is what I wrote:

This is the most ominous chart I’ve seen in years: 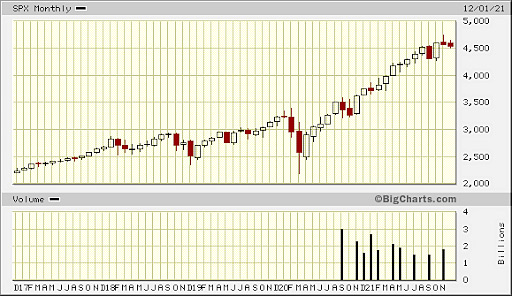 This is a five-year, monthly candlestick chart of the SPX. The SPX is based on the 500 top companies in the United States.

Each candlestick represents a month. The chart goes back to 2017.

That red candlestick from two months ago (October) that looks like an upside-down hammer is called a “gravestone doji.”

In a recent Bull and Bust Report weekly update, I posed a question: Is this a new bull market or the last chance to sell?

I also showed a five-year Nasdaq chart with a 200-day moving average: 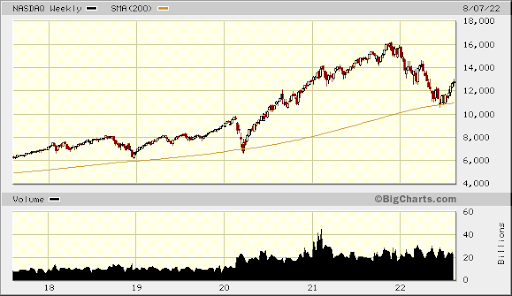 The chart shows we are at the top of the range of the downtrend that started in December 2021.

You may argue that this is like the spring of 2020 when the market took off. The difference is that back then the government was spending $4 trillion on stimulus bills due to the pandemic, and now it is raising interest rates to head off inflation.

In 2020, there was panic and blood in the streets. You’ll remember that members of Congress sold stocks using insider information, the price of oil went negative, and people hoarded toilet paper.

If you think about today, no one is panicking. Meme stocks are still launching. There is plenty of stupid money that needs to be washed out.

The end of a bear market is marked with low valuations and when blue chip companies pay Warren Buffett ridiculous amounts of money to bail them out. And, most importantly, the Federal Reserve starts cutting rates.

We have none of the signs of a bottom. There is no capitulation low.

The dominant market paradigm is that inflation is transitory, the Fed will pivot and start cutting rates, and the stock market will go back up. This is the lie in the market.

In the last inflationary period, inflation topped in 1980 but the stock market didn’t bottom until 1982.

When you take into account the Russian war, the EU energy crisis, China’s failed banks, and emerging-markets food and fuel riots, you have a setup for another 50% sell-off in the major markets.

I’ve been wrong before, and I might be wrong now. However, the risk-reward scenario is to raise some cash and if we do break higher, just buy it back. No one ever went broke taking profits.