Night in the RUTs

When I was a young lad in the late 1970s, my older brother had an Aerosmith concert t-shirt back when they were jacked up on heroin and cocaine. The shirt read “Night in the Ruts” on the front. On the back, the “N” and “R” were crossed out and transposed with a graffiti font, and it read “Right in the Nuts.”

To my adolescent mind, it was coolest shirt in the known universe, though my brother would beat me severely every time he caught me wearing it. 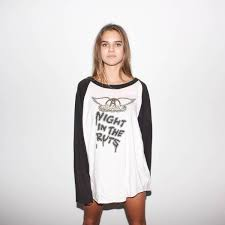 The ticker for the Russell 2000, which is the bottom 2000 stocks of the Russell 3000 index, is RUT, of course. RUT is an index of small- and medium-sized companies with a mean market cap of $900 million.

Traditionally, it performs better than the large blue-chip stocks, especially at the end of a bull market. It has been up over the last two weeks as investors believe it is inured to global trade wars.

On Monday it traded at 1,702, bumping up against resistance from last month. 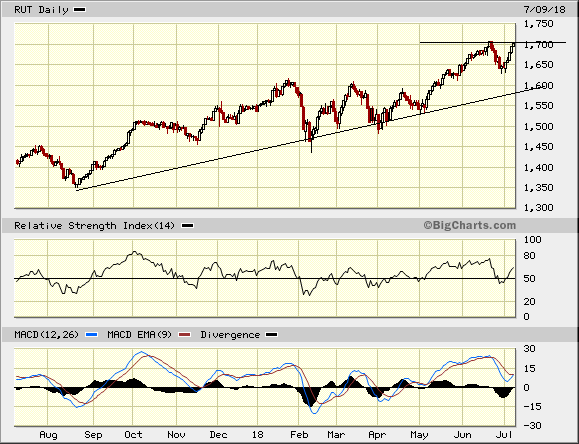 I love small caps due to their higher return over time.

In every decade since 1930, small-cap value has beat large caps with the exception of the Depression.

In your long-term 401(k) portfolio, I suggest you put at least 25% of your assets into one of these funds. Short-term, however, you might get the back of that concert shirt. Here’s why...

It is a widely held notion in the markets today that the boom in equities since 2009 has been propelled by massive inflows from the dorks and mushmouths at various central banks around the world.

If the U.S. Fed stopped printing money, then the Bank of Japan would wear out its fingers adding zeros to the numbers of yen in circulation. Or perhaps it would be those clowns in three-piece lederhosen in Frankfurt who would print euros like they were nostalgic for the Weimar Republic.

But now, according to this handy chart by Bank of America, it seems the money canon is running out of shot. 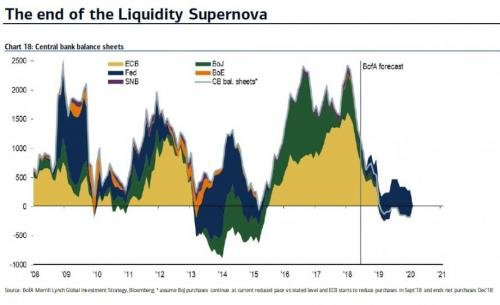 In the recent Fed minutes, the holy economists fretted that the economy might grow too fast, which would cause accelerated inflation and push the economy into a recession.

The minutes stated that there was “concern that a prolonged period in which the economy operated beyond potential could give rise to heightened inflationary pressures or to financial imbalances that could lead eventually to a significant economic downturn.”

The Fed also removed the sentence at the end of statements that said the fund rate would remain “below levels that are expected to prevail in the longer run.”