Natural Gas Investing with a Twist

The Best and Worst in Gas Profits

How are you not bullish yet on natural gas?

It's a tremendous opportunity that's opening up in the coming decade.

On a global scale, it's only a matter of time before natural gas overtakes coal.

Here in the United States, it's obvious which direction we're headed...

In fact, we're using more of the stuff than ever before.

But don't take my word for it — one quick glance at the EIA numbers will confirm it:

How can we expect prices to rebound when we produced more than 28 trillion cubic feet last year? Last week, natural gas prices dropped to $1.87mm/Btu.

And just what are the consequences of this glut? Well, it all boils down to how you play it...

The Worst of Natural Gas

Maybe I pick on this natural gas investment trap too much. But regardless of how many times we warn readers about it, there's always an investor out there who ends up falling for it.

My long-time readers know all about the United States Natural Gas Fund (NYSE: UNG), the objective of which is to reflect the daily changes of the spot price of natural gas at the Henry Hub.

And as you might expect, our glut of gas supply has been absolutely devastating to UNG investors: 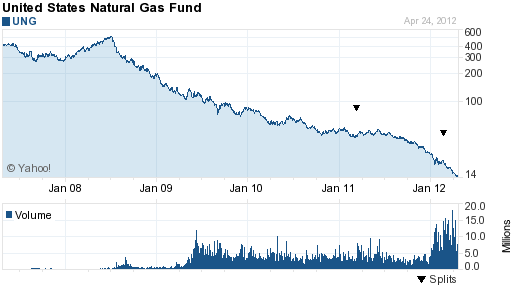 Fortunately, there's a positive side to the nat gas investing coin...

If prices won't recover in North America, natural gas will go to places where consumers are willing to pay handsomely for it.

And believe me, dear reader, finding these buyers is far from a difficult task... 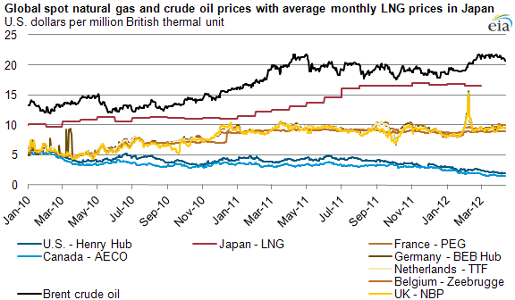 That's why there are currently nine LNG projects that have applied to export U.S. gas (and yet, only one has been given the green light by the Department of Energy).

According to the EIA, that's 14 Bcf per day we might be shipping overseas via tanker.

Oddly enough, the one terminal able to export LNG is located in Alaska, far away from our current shale gas production. So is future U.S. gas destined for Asian markets?

Gas Investing with a Twist

Recently my colleague Christian DeHaemer has been spot-on when it comes to natural gas.

Chris often stops by my desk in our Baltimore office to say hello and butt heads over a particular investment. More oft than not, I end up owing him a cold beer in the end...

This morning was no different.

Chris has known about my bullish outlook on natural gas since the day we met — and he's aware that my readers and I have been sorting through the different producers that have a stranglehold over North American gas production.

But he's taken an entirely different approach. Chris' eyes are fixated on the one place where natural gas prices were doomed: the United States.

“You're not worried that gas is plummeting?" I asked Chris this morning. "Even with more producers shifting to oil, it could still drop further from here.”

To illustrate the point further, I showed him the second ugliest chart in energy (you already saw the worst, above): 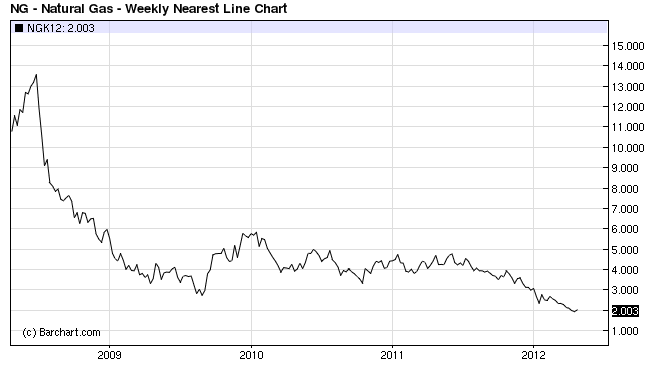 But Chris wasn't fazed in the slightest.