MVPS of the Stock Market

During the golden age of Islam, there was a doctor, chemist, and thinker named Abū Bakr Muhammad ibn Zakariyyā al-Rāzī, or Rhazes for short.

Rhazes is known for many things, including the identification of smallpox and measles, scientific studies on bloodletting, and the discovery of chemicals, such as alcohol among others.

At one point, Rhazes was asked to choose a site for a new hospital in Baghdad. He suspended pieces of meat at various points around the city and recommended building the hospital at the location where the meat putrefied most slowly.

Yesterday, the market panicked over the idea that the coronavirus might spread around the world, much like the Spanish flu in 1919, and kill some 5% of the population. As I write this, the Dow futures are up over 100 points, so it would seem that the fear has turned to greed.

It certainly wasn’t all bad for stocks. Companies like NanoViricides (NYSE: NNVC) jumped 86% in a day. 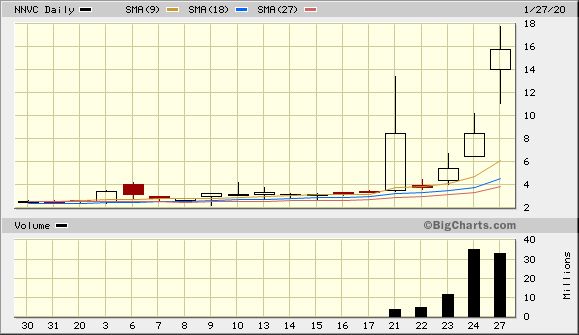 NanoViricides is a nano-biopharmaceutical company that makes drugs for the treatment of viral infections. It also has a market cap under $100 million and just 2.7 million shares in the float.

In other words, it’s just the vehicle for a short-term momentum trade. It is too late to buy now, of course. NNVC is heading back down.

Whatever Became of the Avian Flu?

It is far too early to tell what the outcome of the coronavirus will be. There was a great deal of hysteria regarding SARS, Ebola, and Avian flu — none of which has had long-term effects on the stock market. But who knows? Historians credit the bubonic plague with creating the Renaissance. You see, when 25% of the population of Florence died, it concentrated land, wealth, and power into the hands of a few.

The result was a movement away from simple farming towards banking, credit, and trade — away from grain and towards fine items like wine, oil, cheese, and leather goods. Shipping merchants had high upfront costs and families like the Medici were able to provide financing with interest.

Global trade begets money, power, and the occasional pandemic. Today, instead of trade backed by the Medici, we are backed by the Federal Reserve printing money to prop up yield curves.

And yet, the yield curve inverted yesterday, if briefly.

Investors have rushed into safe-haven U.S. Treasuries, with 10-year yields falling on Tuesday to 1.57%US10YT=RR, their lowest since early October.

The gap between yields on three-month notes and 10-year government bonds briefly fell to -0.015 basis points US3MT=RR, US10YT=RR, its lowest since October, before returning to around 0.01 bps.

"The movement in the curve is probably telling us we are seeing an increasing shift away from risk assets to safe assets, including Treasuries, and the entire curve is being pulled down," said Philip Shaw, chief economist at Investec.

"If the signs were to multiply, there could be a more severe impact not just in China but globally. Markets are starting to speculate the Fed could bring rates down by summer."

In other words, a flight to safety will invert the yield curve and cause the Fed to lower rates and continue pumping money into the repo market, which in turn will push stocks higher.

Which stocks will perform the best? The big boys, the blue chips, the stocks that money pours into from Vanguard,  Schwab, and your 401(k). First, it was BRICs, then it was FANGs. For the next five years, it will be MVPs. What are MVPs? Click here now to find out and start making money today.