Monet, Food Trucks, and JPM Blows it Out

It was 72 degrees on Sunday, and the wife and I decided to go check out the new Monet exhibit at the Smithsonian in Washington, D.C. This show turned out to be four or five paintings with an art professor talking about light on bridges.

In fact, three of the paintings were the same bridge over the Thames in London. While I was grateful for the knowledge, it was disappointing.

I drove in D.C. traffic for this? 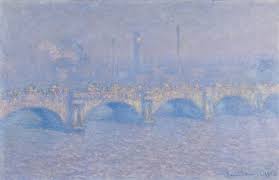 Psychiatrists and other researchers will tell you that humans are optimistic by nature. We anticipate that things will turn out better than they do. We also greatly overestimate the length and power of emotional response. According to the book The Happiness Curve, lottery winners and paraplegics will both return to base levels of happiness within a year.

In fact, people who can predict the future with more clarity, those who see how things will turn out, are less happy than those who do not. I'm not surprised.

The Sunday trip to D.C. got worse from there. After slinking dejectedly out of the National Gallery of Art, we decided to take a chance on the food trucks. This was a mistake. Never, ever eat at the food trucks on the National Mall; it's similar to starting a land war in Asia.

Sure, the pictures on the side of the trucks look like you might get a nice hibachi steak over noodles, but what they are really selling is an expensive intestinal disease served up by a disgruntled, unwashed malcontent.

Part of the problem is that I love food trucks. Baltimore has a thriving business of small entrepreneurs making gourmet fare from back of clean, modern food trucks. (Shout out to the BMore Greek Grill.)

However, the trucks on the Mall... these are like the fabled roach coaches of yore, rolling choke and pukes. They are in the tourist business and get few repeat customers.

The first indication that my optimistic dreams of eating gourmet food on the grass, watching white puffy clouds drift over the Washington Monument were as foolish as Pickett's Charge was when I was prompted to pay with my card. The white tablet swung towards me, and the default asked for a 35% tip. It didn’t suggest 10%, 18%, or 35% for the big spenders; no, it started at 35% and went to 50%. Insulted, I hit “No tip.”

This was a mistake.

The sweaty troll whose job was scooping vague noodles out of a crock of blasphemy rubbed his nose with the back of his hand and grunted loudly, “No tip.” Between him shuffling off to other trucks, talking to his friends, and swapping out one nasty rice pot for another, my wife and I decided the better part of valor was to forgo the $24 and hit the cafeteria at the bottom of the American History Museum.

Strangely enough, the food was good, the prices were reasonable, and the facilities were clean — and they didn't expect a tip. It also had a real Huey chopper in the Vietnam War exhibit, plus the actual gunboat Philadelphia, hero of Lake Champlain, which was dug out of the mud in 1935.

Ironically, the takeaway here isn’t disappointment in the past; it’s optimism about the future.

This morning, JPMorgan Chase reported its most profitable year. Profits jumped 21% in the fourth quarter, pushing annual earnings to a record $36.4 billion.

The company made money despite falling interest rates. There wasn’t much action in Consumer & Community Banking, which was flat. Commercial Banking revenues actually fell.

However, JPM's Corporate & Investment Bank saw revenue jump 31%. Most of that gain was in fixed income trading, which in turn benefited from the Fed pumping up to 100 billion a month into the repo market.

The Fed gifting money to Jamie Dimon is nothing new; in fact, it is wholly expected. But what is new is what JPM is doing with the cash.

Looking ahead, Dimon also said that he continues "to make large investments in technology, including AI, cloud, digital and payments, as well as other investments in innovation, talent, security and risk controls."

In short, Dimon is investing in financial technology (Fintech).

Fintech is the future. Areas such as mobile payments, crowdfunding, blockchain and cryptocurrencies, peer-to-peer (P2P), marketplace lending, finance and insurance software, and wealthtech are booming.

This new wave of creative disruption is changing the way people move money around. Every finance company, big and small, wants to be on the cutting edge. It's where the growth is because it saves people time and money.

On the equity front, since 2016, the Global X FinTech ETF (NASDAQ: FINX) has outperformed the Financial Select Sector Index by 49.59%.

Finance is simply the next industry to be hit by a massive wave of innovation. We’ve watched these tides crush industrial titans like Macy’s and levitate companies like Amazon; stymie GM, Ford, and Toyota while boosting Tesla; and destroy cable television while pushing Netflix to ridiculous heights.

Fintech will produce losers and great 1,000% winners. Little guys will be bought out for huge sums. Others will go bankrupt. Much like the cloud five years ago, this is as sure an investment trend as you can get. And you want to be a part of it for the next five years. Join us and start making money tomorrow.