President Trump has a lot of plans for the United States, and he’s wasting no time in getting them started.

The dust hasn’t even settled from the U-Haul trucks peeling out of the White House, and it seems as if the new administration wants to rehash every trade agreement, including our exit from the United Nations and NAFTA, new tariffs on imports, and making sure all new infrastructure improvements are made with 100% American resources.

Come on, you know what this means, right? More spending, both from us and our neighbors.

In fact, one country in particular is going to bear the brunt of these costs whether it wants to or not.

And soon, Mexico will come to terms with the fact that it is in the throes of a serious energy crisis... one that trumps any issues — including a 1,000-foot border wall...

Just Don’t Have the Energy

Since prices started declining in 2014 as production ramped up in the Marcellus, natural gas has become the new darling of the U.S. energy markets.

And with most of the world jumping on the clean energy bandwagon post-Paris Agreement, a cheap, abundant fuel that emits a fraction of the greenhouse gases of coal was just what the doctor ordered.

Natural gas hit a low in 2012 when it dropped below $2. And even though Mexico had already been importing natural gas from Texas for years, the lure of cheap supply was too strong to be ignored.

Much like countries across the globe are doing today, Mexico began replacing coal plants with natural gas plants and importing as much fuel from the U.S. as possible.

Unfortunately, there’s only so much pipeline capacity to go around. When that capacity is full, you have to supplement your imports with costlier LNG to cover the gap.

Now, some of you may know that Mexico has some pretty impressive natural gas reserves of its own...

Enough that it could have pulled back on these imports quite a bit.

So why didn’t that happen?

To put it simply, it wasn’t worth the cost.

But when its thirst for electricity took off, the country felt a supply squeeze it had never seen coming.

Of course, it took until 2013 for Mexico to finally institute a set of energy reforms to aid its dying energy industry.

Soon enough, prices spiked to about $6 by early 2014, and the country’s dependence on U.S. supply only increased. 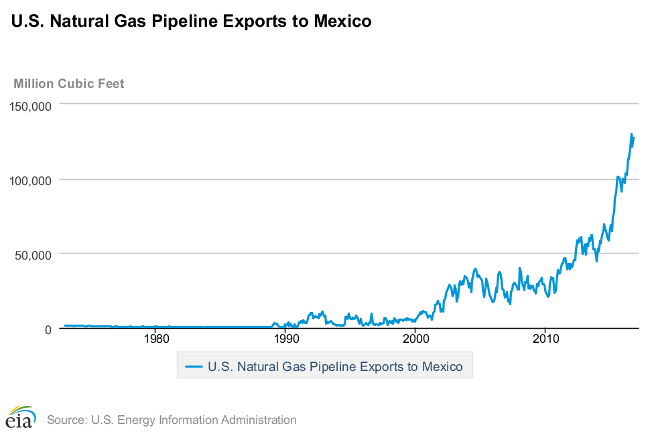 Even while prices were high, U.S. exports to Mexico kept climbing.

By the time natural gas dipped below $2 in March of 2016, Mexico was already importing more than 100 trillion cubic feet per month, and it hasn’t come close to dropping below that number since.

Unfortunately, the country is coming up short in reversing its energy crisis...

Don’t worry, this story has a happy ending... sort of.

The good news for Mexico is that despite his dislike of NAFTA, President Trump will never be opposed to selling our natural gas to them.

In fact, bright and early on Monday, he signed a new executive order that called for slashing two old regulations for every new one that is created.

And if you couldn’t guess by now, our newly elected Commander in Chief is going to mow down regulations in the oil and gas industry.

Clearly the billions spent lobbying is about to pay off in spades.

So of course he’ll want to keep the natural gas flowing south, especially if it means squeezing more money out of Mexico to pay for the inevitable wall.

And will Mexico keep paying?

At this point, it truly doesn’t have a choice...

The country’s imports are steadily growing as it consumes more and more electricity.

More important, however, is that it could take years for the country to fully tap into its natural gas reserves — assuming Pemex can get its house in order — and it can’t very well just turn off electricity to the whole country while it does so (it may not have a choice!).

Bottom line: no matter what Trump does to our trade agreements, we’ll still be selling natural gas to our burdened neighbors to the south.

Look, Mexico is going to need an ever-growing amount of natural gas to meet its demand right now, and it could take years, maybe decades to develop its own resources.

Which means even if it refuses to pay for “The Wall,” Mexico will be paying for the pipes.

The country desperately needs to invest in its midstream oil and gas industry, even before it can really begin upping production from home.

Pipelines are already in the spotlight for Mexico, and I’ve found one stock in particular that’s in the perfect position to benefit from this new round of investment. I’m putting all the details together into one report that I’ll be sending out in the next few weeks.

Why Mexico Will (Gladly) Pay for Trump's Wall
Energy and Capital editor Keith Kohl tells readers why Mexico may end up begging to pay for Trump's wall.
Forget Dow 20,000... Focus on THIS
Energy and Capital editor Keith Kohl focuses on a developing story that will have far more implications for investors than the Dow passing 20,000.
Texas Tiger Money
Energy and Capital editor Keith Kohl reveals a startling fact about a tiger problem in Texas. One of the little-known facts about the Lone Star State is that there are more tigers in captivity in Texas than all across the wild.
Donald Trump Investing Big in Wind Energy
Wind Power has the most to gain from the Trump Administration. Will Donald Trump go down as one of the biggest advocates for renewable energy?
Hydrogen Fuel Cells: The Downfall of Tesla?
Lithium has been the front-runner in the battery technology market for years, but that is all coming to an end. Elon Musk is against them, but Jeff Bezos is investing heavily in them. Hydrogen Fuel Cells will turn the battery market upside down and we've discovered the tiny company that is going to make it happen.