Yesterday, the market sold off 1,000 points based on coronavirus fears, though I think it might have more to do with Bernie “Free Stuff” Sanders being the front-runner for the Democratic primary.

Of course, neither of these are the real reason for the sell-off. The reason is that the market got ahead of itself after jumping 30% last year and starting 2020 strong. Pundits give reasons for sell-offs after the fact.

That leads me to an interesting market psychological thing called the “magazine cover indicator.” This signal says the cover story on the major business magazines, like The Economist, Businessweek, or Forbes, is a contrary indicator and signals a turning point in the market.

A famous example is a 1979 Businessweek cover entitled, “The Death of Equities.” The 1970s showed poor performance in stocks, with big moves in gold and silver.

However, you should have bought equities after seeing the cover. Going all in on stocks in 1980 was the best-timed buy of the next two decades. The Dow went from 800 to 14,000.

In other words, when the mainstream financial media proclaims something unknowable as a fact, you should bet the other way. By the time it hits the magazines, the idea has run its course. Think of it as the financial equivalent of the "Madden Curse" — where the NFL star who graces the cover of the John Madden Football game always has a bad season.

It might sound silly, but it actually works. In 2016, Gregory Marks and Brent Donnelly of Citigroup looked at The Economist and “selected 44 cover images from between 1998 and 2016 that seemed to make an optimistic or pessimistic point.”

They found that impactful covers with a strong visual bias tended to be contrarian 68% of the time after one year.

Here are some examples:

Here is the latest cover: 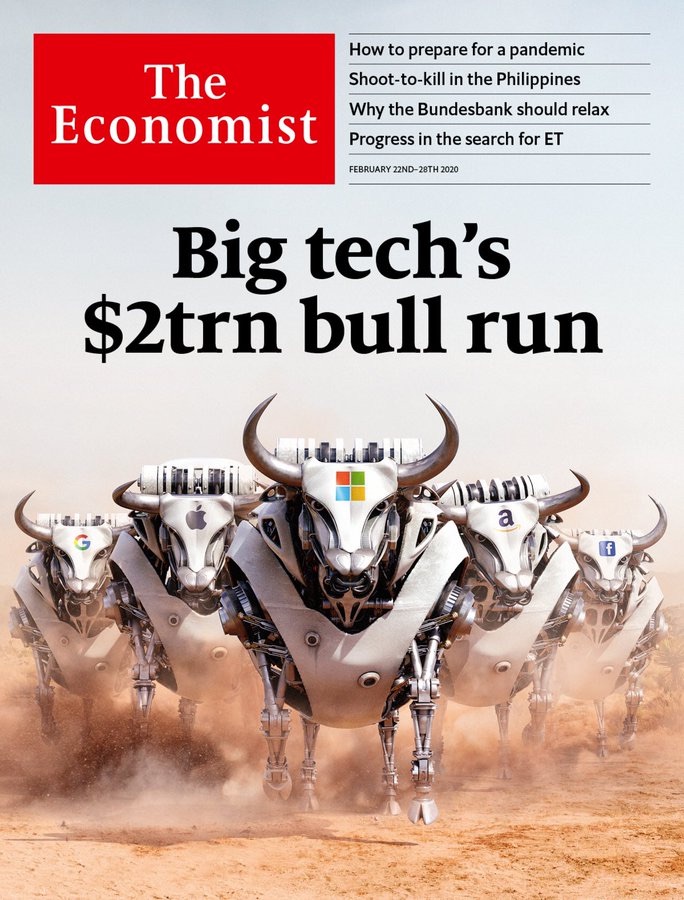 It shows the FAAMG stocks — Facebook, Amazon, Apple, Microsoft, and Google. Microsoft is worth $1.4 trillion dollars. These five stocks together are worth around 18% of the S&P 500. The entire GDP of the United States is worth some $22 trillion.

It begs the question, how much higher can these large caps go? Can Microsoft double again to $3 trillion? Of course, but is it likely to happen over the next two years? Maybe. But it would be more prudent to buy into the next wave of high-powered growth stocks.

Facebook and Google are quickly coming to the point of total saturation for advertising dollars. Amazon’s Jeff Bezos has divided his attention among many sectors and is losing the cloud war to Microsoft. Apple has a very real China problem.

It’s time to dump the FAAMG stocks and buy these four winners instead.